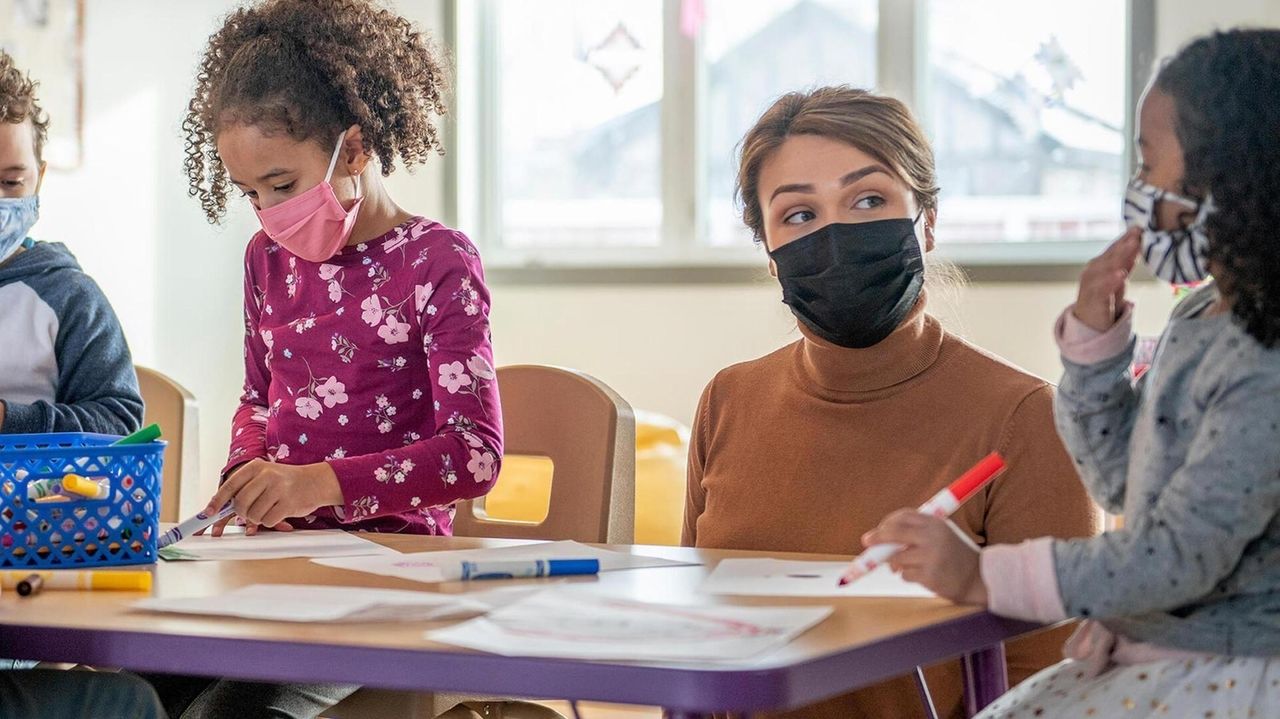 The key to full-time, in-person learning could be loosened COVID-19 regulations, but is it worth it? Experts in health and education discuss this and more. Panelists include Amina Kennedy, Secondary English Teacher at Robert Frost Middle School in Deer Park; Dr. Sharon Nachman, Chief of the Division of Pediatric Infectious Diseases at Stony Brook Children’s Hospital; Donald A. James, Ed.D., Superintendent of Commack Schools; and Linda Wygonik, Eastport-South Manor Teachers Association Union President. Sign up for COVID-19 text alerts at newsday.com/text.

Long Island education leaders are struggling with whether to abide by state and federal social-distancing guidelines and keep desks six feet apart, or to relax those rules to squeeze more students in a classroom, officials said Thursday during a Newsday Live panel.

Some districts have moved to loosen the recommendations, which were set by the Centers for Disease Control and Prevention and the state Department of Health, by moving desks — often protected by sneeze guards — closer together. This would allow all but fully remote students to return in-person full time. But other districts have continued to follow the six-feet guidelines, often necessitating students in grades 6-12 to remain on a hybrid schedule.

Wygonik said the policy has caused an uptick in COVID-19 infections and fractured trust between teachers and district leadership.

"In-person education is the number-one priority, but we want people safe," Wygonik said during the panel discussion, which was moderated by editorial writer Lane Filler. "With a worldwide pandemic, safety needs to be a part of the equation … and my teachers don't feel safe right now."

District Superintendent Joseph Steimel cited a number of safety precautions implemented by Eastport-South Manor, including polycarbonate barriers between desks, rotating the number of students in the cafeteria and mandatory mask wearing.

"The district is discouraged over the allegations being made by Ms. Wygonik, which are not accurate," Steimel said. "The safety and well-being of all our students and staff is always a top priority. We take COVID protocols very seriously and follow the rules, regulations and guidance provided by NYSED and NYSDOH. Furthermore, there currently is no uptick in reported cases in the district."

Commack Schools Superintendent Donald James said he's considering a similar approach to bring middle and high school students — who are currently on a hybrid schedule — back full time. Only 5% of the district's 6,000 students are fully remote, so moving desks closer than six feet is the only way to return to a five-day-per-week in-person schedule, James said.

"By all measures, our students are further along this year than they were last year," James said. "However, there's no substitution for face-to-face in-person instruction."

Parents, he said, are divided about the prospect of loosening restrictions for the remainder of this school year but concede that such a plan will likely be needed by the fall.

Amina Kennedy, an English teacher at Robert Frost Middle School in Deer Park, said her district is steadfast that it will not loosen the six-feet rule in classrooms, on the school bus and with after-school sports. The district, she said, is expected to release a plan next week that could bring grades 6-12 back in-person full time.

"The CDC says six feet and that's what we're sticking with," Kennedy said.

Dr. Sharon Nachman, chief of the division of pediatric infectious diseases at Stony Brook Children’s Hospital, said there is not enough data to show whether keeping desks six feet apart or less makes a significant difference in the spread of the coronavirus.

But Nachman said contact tracing shows the overwhelming majority of students and teachers who contract COVID-19 become infected outside of school.

"We see an occasional report of teachers getting COVID from students," Nachman said. "But it's not a trend. It's a very rare, sporadic event … When you think about where COVID is coming from and infecting other people it's rare that it's happening in the school."