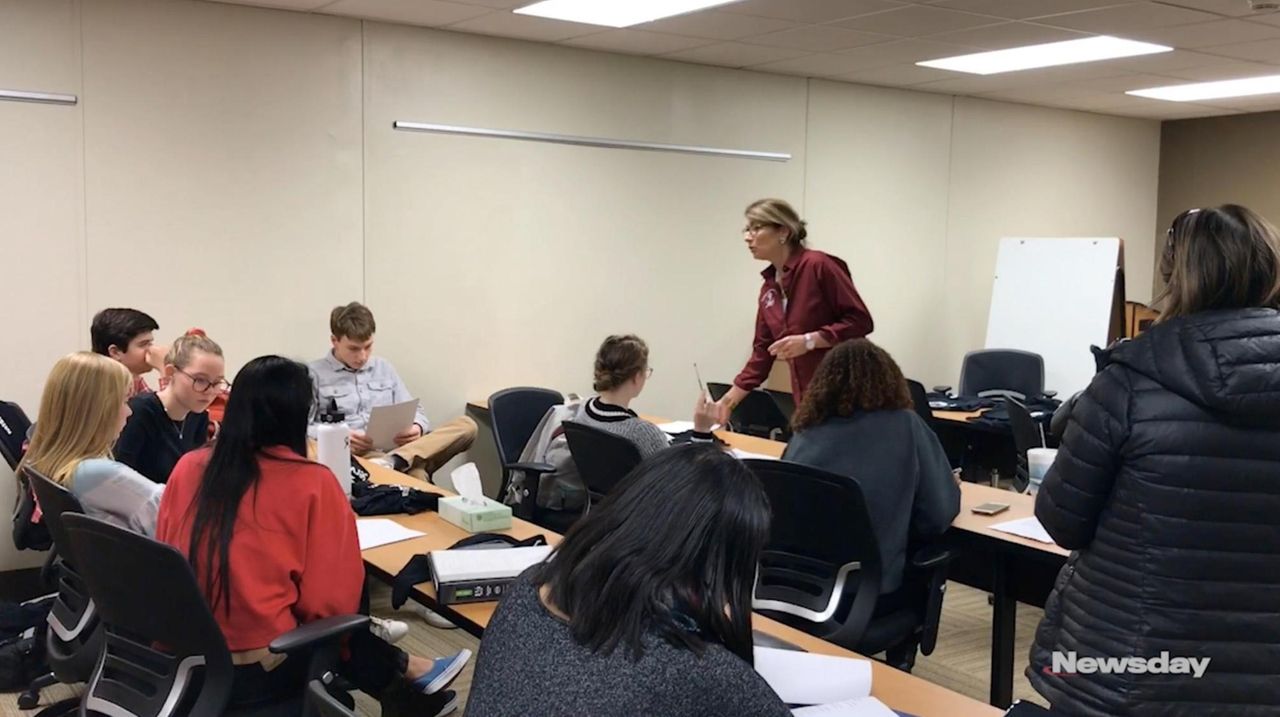 Southampton High School students and some of their parents describe on Dec. 14 their plans to travel to a small town in Puerto Rico during the holiday break to help repair a school there. Credit: Newsday / Joie Tyrrell

The small private school in the town of Juncos, like that entire community near San Juan, was ravaged by Hurricane Maria in September 2017. Photographs show cracked walls, the roof partially ripped off and peeling paint.

The day after Christmas, about two dozen Southampton High School students and some of their parents will head to the mountainous region to spend most of the last week of 2018 helping the school rebuild. They are scheduled to return home on New Year’s Eve.

It is a change in the district’s tradition of recent years. Local organizers of such service projects have taken students to the Dominican Republic. This is the first time Puerto Rico — still struggling from the hurricane’s devastating effects — is the destination.

“I really believe the kids need to be taught what service is,” said Susan Wright, the high school’s assistant principal, who organized the trip. “They learn what service is and how to be a servant and how to become a good leader. If you help others on the way, it develops skills in life.”

Hurricane Maria struck Puerto Rico as a Category 4 storm, causing an estimated $40 billion to $95 billion in structural damages and knocking out power across the Caribbean island that is a United States commonwealth.

Federal officials estimated 64 people died during Maria, but the island’s governor has formally raised the death toll to an estimated 2,975. The U.S. Census Bureau reported last week that more than 130,000 people — about 4 percent of the population — have left since the storm.

World Servants, a Pennsylvania-based nonprofit that had worked with the Southampton school to organize travel and work on past trips to the Dominican Republic, helped coordinate the Puerto Rico journey. Tim Gibson is World Servants’ president emeritus and will accompany the Southampton students to Juncos.

Gibson and others with the nonprofit group had spent about a week and a half looking at locations in Puerto Rico and discovered that hundreds of schools were unlikely to reopen. But Colegio Bautista de Juncos, which has about 130 students in prekindergarten through ninth grade, still was operating.

“We knew it would be sustainable and it would stay open,” Gibson said. “We didn’t want to work on repairing it and having it close.”

The school’s students will be on holiday break while the contingent from Southampton is there. The Long Island students, who are in grades nine through 12, mostly will work to sand and paint walls that had significant water damage, Gibson said. They also will visit with local families.

On a recent Friday, the group met at the high school to discuss travel arrangements. Everyone going on the trip was issued a T-shirt with the World Servants logo.

Junior Wilson Green, 16, said it will be his first service trip.

“I seems like a really good opportunity to go out and help some people on a break that I have,” he said.

Wright has led five prior trips, all to the Dominican Republic, where the group helped to build schools.

“This is going to be different for me. I am not sure what to even expect,” she said. “We are helping a school that is already in existence, and it is in part of America.”

Wright said the district is supportive of the service trips, but money to pay for the expeditions comes from students’ fundraising efforts. The students raised about $1,600 each to cover expenses by holding car washes, raffles and other events over the past year.

Natasha Jeffries is accompanying her son, Kellen, a 14-year-old freshman who is in the district’s dual-language Spanish program.

She believes it will make them both “more aware of how other people live and . . . become empathetic to what people have and don’t have — people who live not that far away from us, but maybe don’t have as much as we have.”

Sophomore Kiera Gill, 15, said she is “thrilled” by the opportunity.

“You are going to a place where they are not as fortunate as us,” she said. “And to get to help someone — it is an awesome experience.”