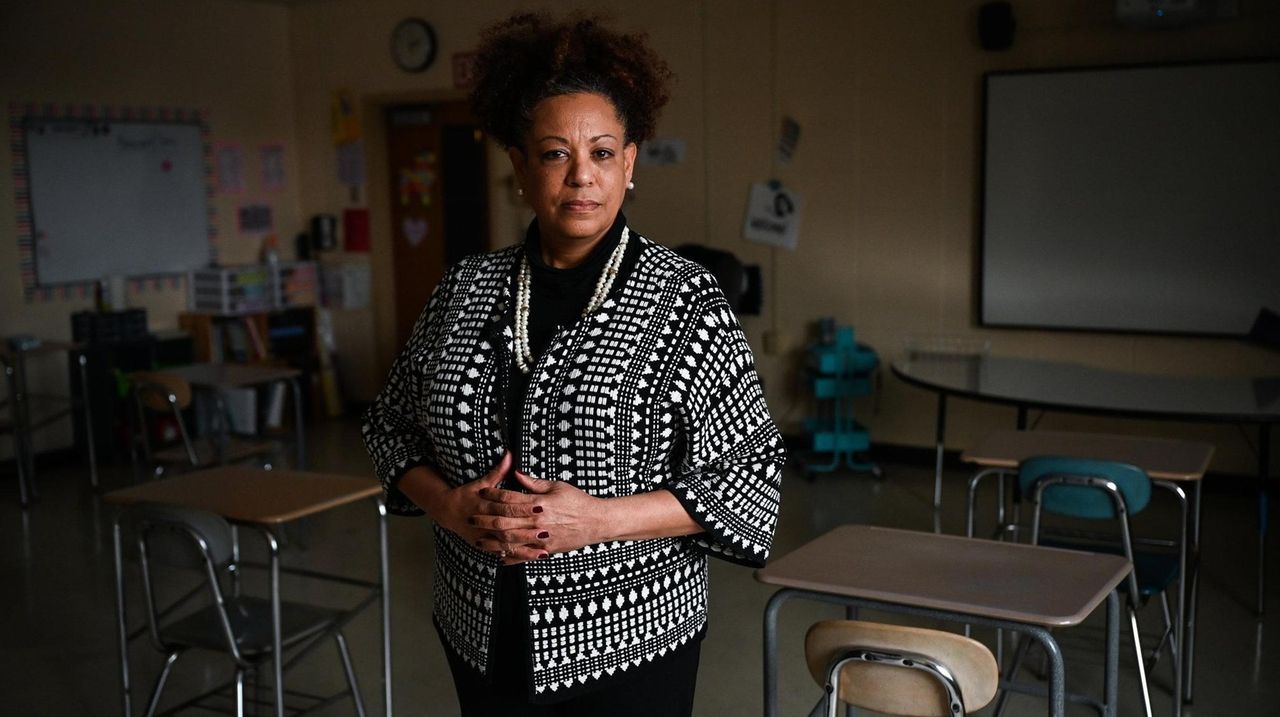 Donna Jones, the superintendent in the Patchogue-Medford school district, spoke to Newsday on Wednesday about what potential budget cuts could mean for her district. Credit: Newsday / Steve Pfost

Fifty school districts across Long Island would lose money under the state's latest aid proposal — the biggest reversal of its kind since the aftermath of the Great Recession 10 years ago.

Potential aid reductions on the Island are driven by a state budget crunch, aggravated by the COVID-19 pandemic and uneven distribution of federal school funding.

A Newsday review of the state's budget plan, released Jan. 19 by Gov. Andrew M. Cuomo, shows potential dollar losses spanning the map, from Sag Harbor and Southold in the east to Elmont and Floral Park-Bellerose in the west. Systems taking the biggest hits of $1 million or more include Valley Stream Central, Bayport-Blue Point, Connetquot and Smithtown.

The same pattern is repeated across the state, with a total of 156 districts out of 673, or 23%, marked for reductions in state support during the 2021-22 school year. The Nassau-Suffolk region would be hit particularly hard, with more than 40% of systems facing losses.

Figures at the statewide level were provided by the New York State Council of School Superintendents, an advocacy group based in Albany.

The number of Island districts facing potential reductions this year is the most sweeping since 2011, when Cuomo proposed cuts affecting virtually all school systems. Most of the record-breaking losses that year were ultimately approved by legislators, during a time when the state was still recovering from two years of economic collapse and ensuing recession.

By law, a final state budget is supposed to be adopted by April 1 each year. Typically, final versions provide at least slightly more money than originally proposed by governors.

Two years ago, for example, Cuomo recommended a package that would have provided $59.2 million in extra operating aid to the Island, with 13 districts slated for losses. The final version passed by legislators provided $86.4 million extra, with 11 districts losing some money.

In recent weeks, local school officials have taken issue with the state's plans, noting that the announcement of potential aid cuts comes just as they are drafting their own budgets in the face of the COVID-19 pandemic.

Some local officials also point out that, while many of their schools face potential aid reductions, urban systems, including New York City, Buffalo and Rochester, are gaining aid by double digits, percentage-wise.

"It's very frustrating for suburban districts, because we felt for many years that we didn't get our equal share of aid," said Donna Jones, superintendent of Patchogue-Medford schools, where a million-dollar aid cut is proposed.

Local budget votes are scheduled for May 18.

Some local administrators warn the financial situation could grow more dire in 2022-23, if federal relief money that is now helping keep districts afloat should dry up.

Initially, Cuomo's school-aid plan appeared promising as outlined: a $31.7 billion package that would boost support by 7.1% statewide. However, a reading of the fine print revealed anomalies.

The state, which is scrambling to close a budget deficit estimated by some experts at $4 billion, cut back on its own financial support of schools by more than $600 million. At the same time, the state drew on $3.8 billion in federal stimulus money as a supplement for schools.

This altered the distribution of money in a fundamental way. Federal aid is allotted primarily according to a formula based on the number of students living in poverty. New York City, which serves poor youngsters in large numbers, gained the most additional aid, totaling nearly $1.5 billion.

Robert Lowry, deputy director of the state superintendents' council, noted that the 7.1% figure, while the largest percentage increase in more than a decade, was "not at all representative of what most school systems would experience." Lowry elaborated on this in testimony presented at an Albany budget hearing on Jan. 28.

The plan could change

In messages to Newsday, Freeman Klopott, a spokesman for the governor's budget division, emphasized that aid allotments were determined by a federal formula rather than state formulas normally employed. Klopott added that "no district receives less funding next year than in the current year due to changes proposed in the Executive Budget."

Cuomo critics contend, nonetheless, that the governor bears some responsibility for the budget issues. E.J. McMahon, founder of the Empire Center for Public Policy, a conservative think tank in Albany, noted that the state was already running a deficit estimated at $2 billion before the coronavirus pandemic struck and further disrupted state revenue collections.

"He failed to lead," McMahon said in a phone interview, referring to what he considered the governor's early inaction on deficit reduction.

On the Island, some school leaders hope that President Joe Biden's $1.9 trillion relief plan, now making its way through Congress, will provide some additional assistance. Just how much is anybody's guess.

"It's really a crapshoot," said Michael Lonergan, superintendent of the Longwood district, which faces a proposed $1.4 million cut.

How much state aid will your school district get?Federal and state financial aid to Long Island school districts would rise by just 1.15% next year, according to a Newsday analysis of Gov. Cuomo's proposed budget.