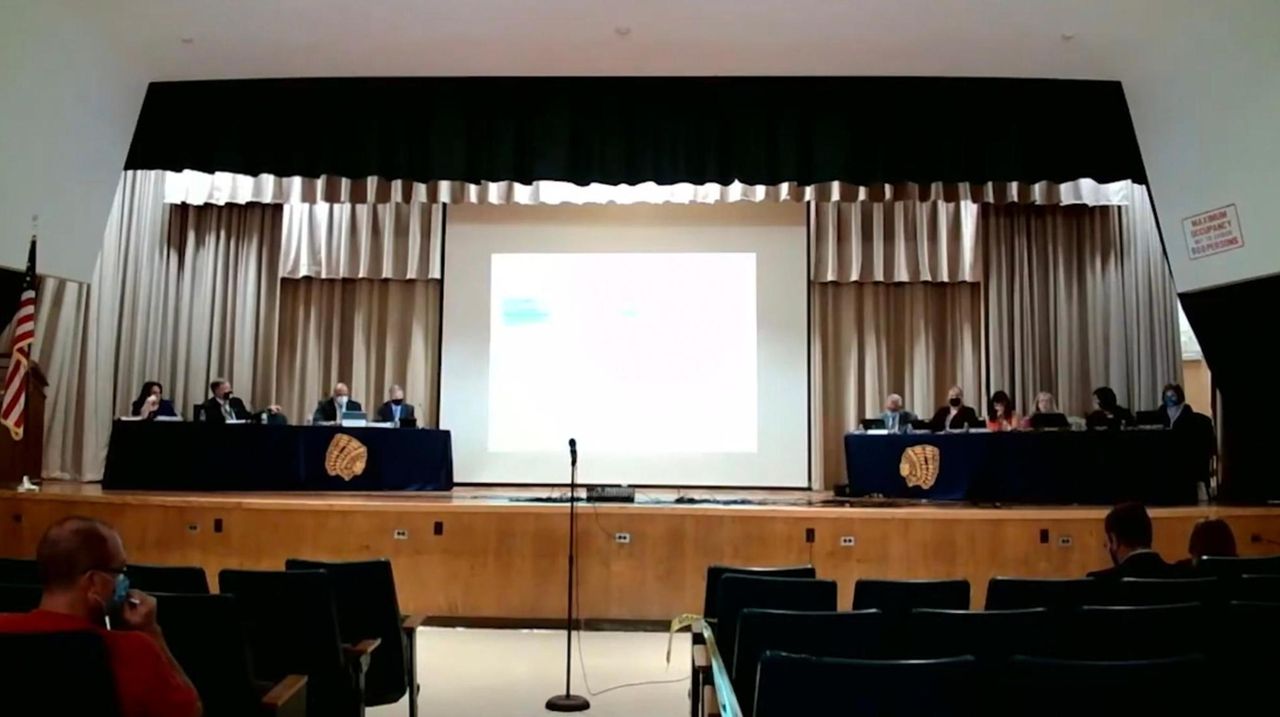 Massapequa school board trustees at a meeting Thursday night approved a lawsuit against New York State challenging the school mask mandate that state authorities imposed to reduce the spread of the coronavirus. Credit: Massapequa School District

Massapequa school board trustees have approved filing a lawsuit against New York State challenging the school mask mandate that state authorities imposed to reduce the spread of the coronavirus.

"Neither the health commissioner nor the new governor, Kathy Hochul, have the power to establish a statewide mask mandate policy as an emergency health measure," school board president Kerry Wachter said at a Thursday night board meeting, reading from a statement.

The Locust Valley school district also was expected to join the suit, which would be filed Friday in Albany County Court, Wachter said. Newsday could not find a court filing Friday night.

The Locust Valley superintendent and board trustees did not respond to interview requests. That district's board on Aug. 30 approved hiring a Melville law firm in connection with litigation against the state.

Massapequa and Locust Valley were among districts that pursued mask-optional policies this summer. They reversed themselves after the state warned that board members could be ousted and school districts could have financial aid withheld by the state.

Wachter’s statement framed the suit as a constitutional and statutory matter but also addressed what she described as practical problems with the emergency health regulations filed by the state Health Department on Aug. 27.

"Masking all students from unvaccinated 3-year-old prekindergartners to vaccinated 18-year-old seniors is not universally accepted by scientists and educators as beneficial in all circumstances when weighed against the negative effect it has upon education, especially of young children," she said.

The Centers for Disease Control and Prevention recommends school mask mandates and that people in areas of high transmission — like Long Island — wear masks indoors in public. Masks provide some protection for those who wear them, but their primary benefit is to protect others by reducing the emission of virus-laden droplets when people breathe, according to the CDC.

The agency said last week that COVID-19 hospitalizations among children and adolescents rose by nearly fivefold between late June and mid-August. No vaccine has been approved for children under 12.

State data showed Long Island had 449 COVID-19 hospitalizations on Friday, well off peaks in April 2020 and January, but up from a lull in June and July, when daily totals fell into double digits.

In her statement Thursday, Wachter argued that Hochul did not have the authority to impose a state mask mandate.

"The legislature gave such authority to Gov. (Andrew M.) Cuomo in March 2020, but withdrew it in March 2021," she said. "This absence of legal authority to issue a statewide school mask mandate was candidly and repeatedly acknowledged by Governor Cuomo and the health commissioner during Governor Cuomo’s tenure. Nothing has changed except the occupant of the governor’s mansion."

Wachter also argued that the district was following international consensus on the issue, citing a number of European nations that she said chose to "strike a delicate balance protecting children and educating children by rejecting mask mandates because of the limited additional health safety they promote versus the obvious educational damage they cause."

Wachter, through a representative, declined an interview request.

Haley Viccaro, a spokeswoman for Hochul, said the governor’s office would not comment on pending litigation but referred to remarks Hochul made last week in Buffalo about new measures, including the mask mandate, intended to combat the highly contagious delta variant of the virus.

"We'll take bold, dramatic action to protect individuals in the state, but particularly our children as we start schools," Hochul said. "Kids are resilient. They can handle a mask on their face."

Hochul said she did not favor an open-ended mandate. "We'll do it now and we'll assess because there'll be parts of our state where the numbers drop, you get the vaccination nods, and we get the vaccine out to children," she said.

Robert Lowry, deputy director of the New York State Council of School Superintendents, said his organization didn't have a position on the lawsuit but does support a statewide school mask requirement as a strategy for "keeping substantially all kids in school five days a week."

The council does, however, advocate adding provisions to the requirement, "indicating that it is not the expectation or intention that students would have to endure masks for the entire school year," Lowry said.

James Sample, a constitutional law professor at Hofstra Law School, said the August mandate did not fit the "optimal" model of a law passed by the legislature and signed into law by the governor. But, he said, "in emergency contexts, the executive branch of government has the ability to move swiftly to address a crisis environment where seating the legislature and going through the traditional legislative process is impractical."

In public health matters, he said, "the Department of Health has been granted extensive authority by the legislature, long predating any COVID pandemic. There’s a real health need and concern, and the experts in the health world feel they’re acting consistent with that."

The Massapequa school district is one of the largest in Nassau County, with 6,713 students in the 2019-2020 school year.

In a video of the Thursday night meeting, several parents praised the board's decision. One father, Chris Brooks, who has boys in kindergarten and second grade, said in a Friday interview that he saw the suit not as a bid to remove masks but to "keep parental rights and local control" of schools. "What works in the Bronx or upstate New York doesn't necessarily work for Massapequa," he said, citing high local vaccination rates for adults and summer programming through the district that he said had been offered with no outbreaks.

Another father, Bobby Bonett, who has a daughter in kindergarten, said the lawsuit was a mistake.

"My tax dollars should go to her education and her safety, not toward a political lawsuit," he said in an interview.

The district paid $25,507.08 in legal fees at $260 an hour, according to billing records obtained by Newsday in a public records request.

The district may have other allies besides Locust Valley. In Smithtown, school board trustee John Savoretti questioned the science behind mask wearing at an Aug. 31 board meeting and asked district leaders to consider joining a suit against the state.

"We can win this with strength in numbers," said Savoretti, who did not respond to an interview request earlier this week. "We can stand up as a school district, as a community, and tell them, ‘You know what, we’re not dealing with this.’"

Smithtown trustees closed their meeting without voting on Savoretti’s proposal, but a lawyer for the district said at the meeting he would seek more information.