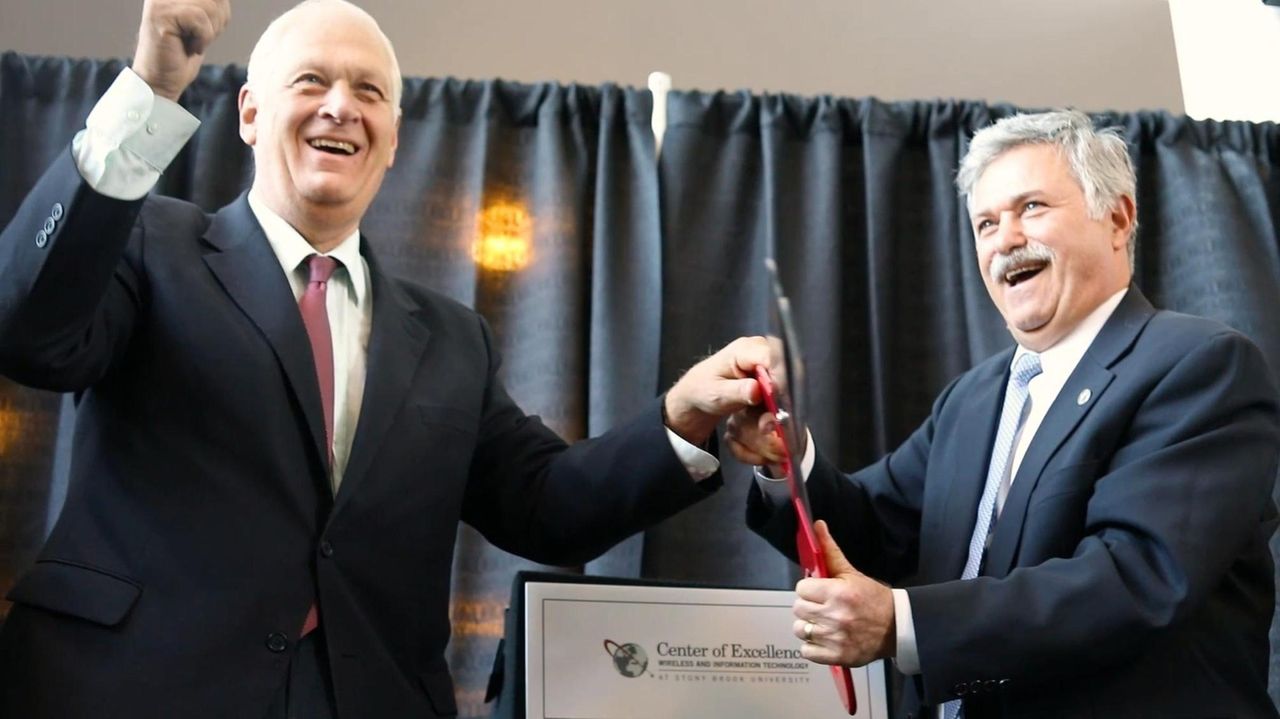 Stony Brook University officials on Wednesday held a ribbon cutting event celebrating a $1 million upgrade to the Reality Deck project, one of the largest immersive video displays in the world. Credit: Morgan Campbell

Professor Arie Kaufman entered a virtual space on Monday and walked through a person's colon looking for signs of cancer.

It was part of his Reality Deck project, a $3 million virtual reality theater at Stony Brook University that allows scientists and doctors to get inside living bodies and travel through them in 3D.

While he stood in the "silo" — a small cylindrical room whose walls were lined with screens — the colon was about 10 feet high as the camera traveled through it.

"This is a dream come true," Kaufman said. The project is "basically a supercomputer on steroids."

On Wednesday, he and other Stony Brook officials attended a ribbon cutting at the site, celebrating a $1 million upgrade that they said makes it the largest immersive video display in the world.

The project also includes another area known as "The Cave," a 627-square-foot room whose four walls are tiled floor-to-ceiling with 416 high-resolution flat-screen monitors.

It allows scientists, engineers and physicians to visualize huge amounts of data in a new way, its Stony Brook creators said.

Besides enhancing health care, the system can be utilized to recreate the conditions of superstorm Sandy, for example, and illustrate how far inland flooding would occur on a worldwide basis.

It can envision what would happen if the North Pole melted and sea levels rose by 90 inches, showing which areas would be underwater.

The system also has potential law-enforcement uses, because it can monitor the movements of every person at a large event, such as the presidential inauguration in Washington, D.C.

The system is so sophisticated it can provide detail fine enough to give a 20/20 view of the faces in a group photo of all 325 million citizens in the United States. The resolution in the Reality Deck is an extremely high 1.5 billion pixels.

“This is a great thing that the university is doing,” he said. “It’s going to be very effective. I want to learn and see if there is a way that we could apply this type of technology to the Town of Brookhaven.”

Kaufman said that beyond medical and security issues, the technology can also be used for entertainment. An Indian tribe in Nevada has already contacted him about bringing the technology to their casino. Movies are also likely to adopt the tech, he said. The project extends to the art world as well. It has the works of 10,000 artists, which can be projected on the walls.

Kaufman estimated the 3D virtual colonoscopy, a technique born out of innovations he spearheaded at Stony Brook in the 1990s, has saved 30,000 lives.

The technology is so sophisticated that the computer by itself can detect polyps in the colon.

"We’re not firing the doctors," he said. “We just want to help them as a second reader.”