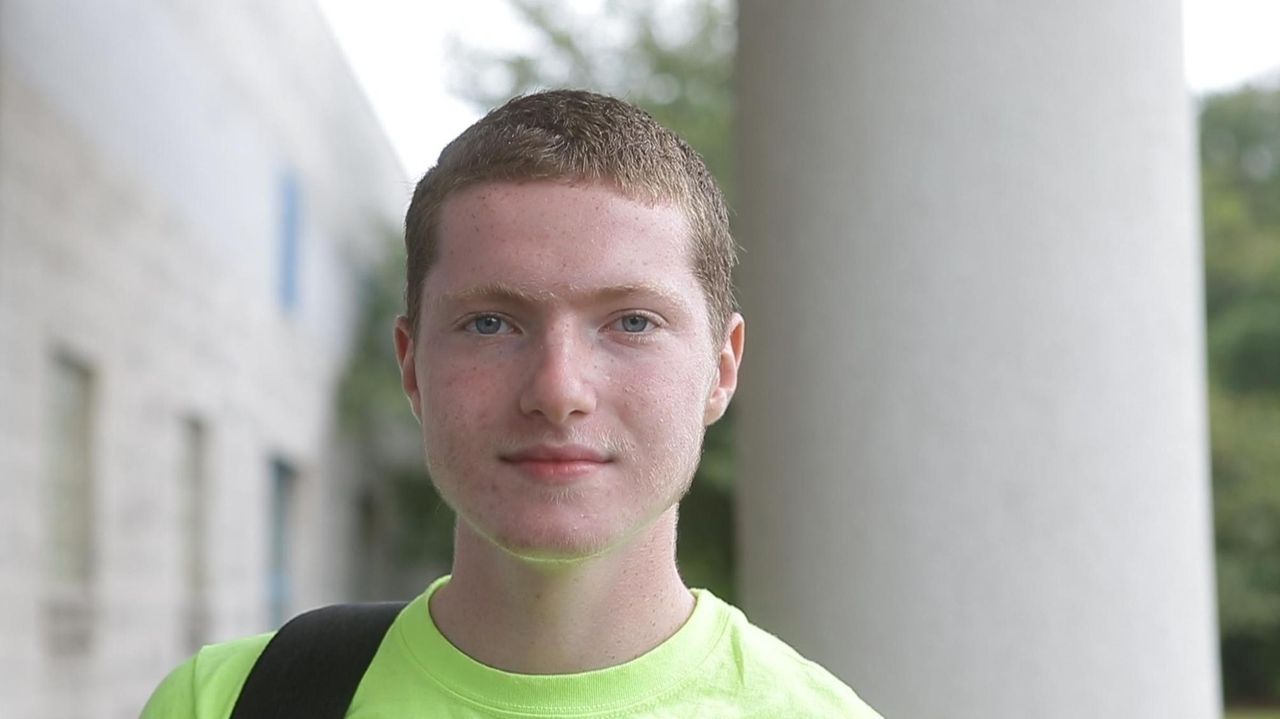 A suspended William Floyd High School student was arrested Thursday morning after he showed up in person. Maverick Stow has been protesting the school’s hybrid learning plan. He wasn’t supposed to be at school on Tuesday, but showed up for class and was suspended. Despite the suspension, he came back again on Wednesday and Thursday. Cecilia Dowd has the story. Credit: Newsday / Cecilia Dowd; Howard Schnapp; Photo Credit: Nora Kaplan-Stow

The showdown between a William Floyd High School senior and administration officials reached a breaking point Thursday when he went to school despite being on suspension for violating the district's coronavirus pandemic hybrid learning plan — and he was promptly arrested, later charged with criminal trespass.

On Tuesday, Stow, 17, went to school despite it being his scheduled day for remote learning and was issued a five-day suspension. On Wednesday, Stow returned to William Floyd despite the suspension — and school officials told him he faced criminal trespass charges the next time.

On Thursday, Stow again went to the high school and was arrested by Suffolk County officers.

Police took Stow to the Seventh Precinct in Shirley, where he was charged with third-degree criminal trespass and issued an appearance ticket returnable to First District Court in Central Islip on Sept. 24.

Asked earlier why he was headed to school despite the suspension and threats of arrest, Stow said: "Well, I’ve just been trying to go to school — and they’ve been consistently disallowing me to. ... I’m going to go into school and they’re going to call the police and I’m going to be arrested this morning."

In a statement after Stow's arrest Thursday, school spokesman James Montalto said: "If Mr. Stow continues to try to access school grounds each day that we are open, we will close the high school — and its approximately 3,000 students — to all in-person learning and it will be all virtual for the foreseeable future.

"We are still in the midst of a pandemic and will abide by the regulations set in place by our government and health officials designed to keep our students and staff safe. As we have said, Mr. Stow’s rights as a student do not surpass the rights of any of our other 8,799 students," the statement said.

Stow said he was protesting the "hybrid model" instituted for the fall semester at William Floyd — the district is conducting three days of virtual learning and two days of in-person school attendance due to pandemic protocols.

Following his arrest, Stow said he didn't plan to protest or picket on Friday. He vowed to continue attempting to attend school every day once his suspension had been served.

On Wednesday, the teenager's mother, Nora Kaplan-Stow, agreed with her son's desire to attend classes on campus full-time.

After her son was arrested Thursday, Kaplan-Stow said: "I have mixed feelings truthfully, I'm beyond proud of my son for standing up for what he believes in and defending his right to an education. I also, I’m a little upset … it’s a very sad day when a student gets arrested for wanting to be in school.”

The coronavirus has killed more than 2,000 in Suffolk County and 25,000 across the state.

William Floyd High senior again goes to school to protest remote learningThe 17-year-old was sent home with a five-day suspension. When he showed up again the next day school officials called the police.