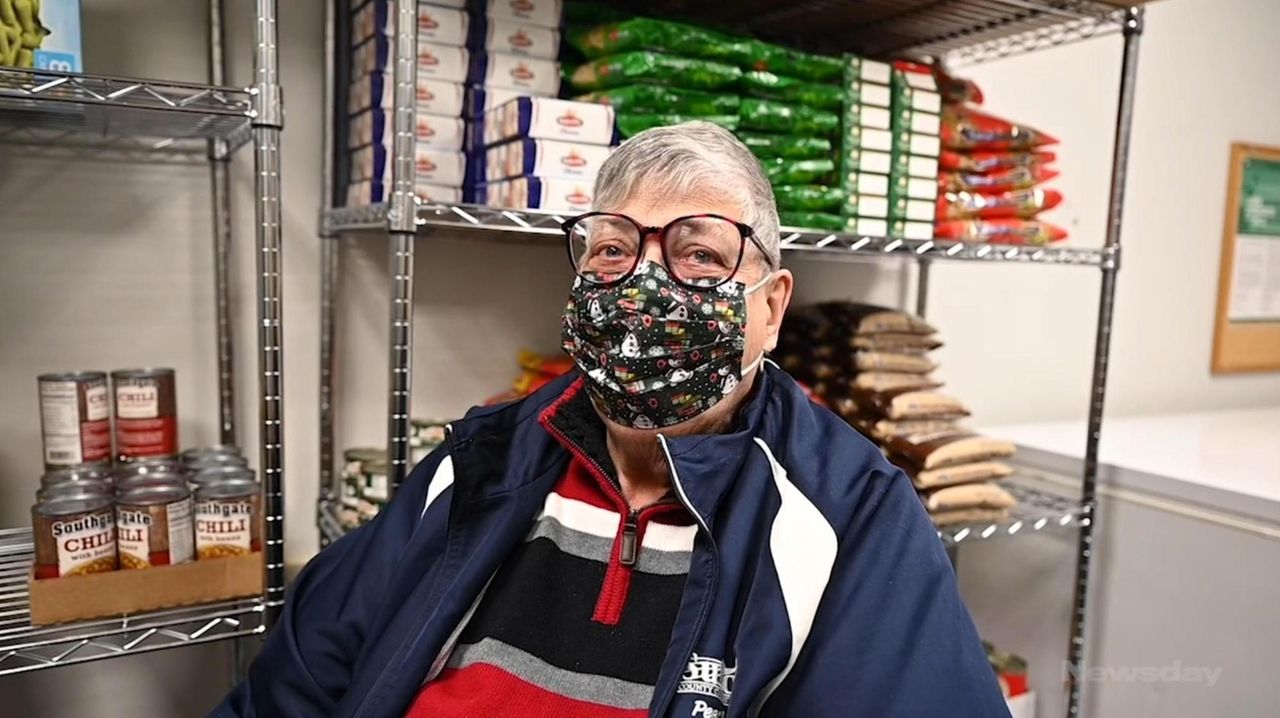 Mary Ann Borrello, longtime professor of anthropology at Suffolk County Community College, was always ahead of the curve during her 48-year tenure at the school, her friends and colleagues say.

Borrello, who notably started the college’s food pantry in 1976 — decades before a statewide task force would be formed to target food insecurity on college campuses — is retiring in January. The 81-year-old known as "Sister Mary Ann" will leave behind a legacy of philanthropy, kindness and community spirit, colleagues say.

"She’s been the backbone of every charitable effort here," said Lynn Liebert Marx, academic chair of the social sciences department on the Michael J. Grant campus in Brentwood. "I don’t know how we’ll fill the void when she leaves."

The community college's food pantry, in Room 11-B of Nesconset Hall on the Grant campus, is the oldest campus pantry across the 64 institutions in the State University of New York system, according to SUNY. It provided families with a weekly supply of food on Tuesday for the Christmas holiday, college spokesman Drew Biondo said, as it has done every Tuesday throughout the coronavirus pandemic.

"Hopefully, when the pandemic is over, I can go back to the pantry and keep coordinating pantry-related efforts from the campus — even though I'll be retired," said Borrello, of Central Islip. "I have to physically keep moving. Otherwise, I'm no good to myself."

This holiday season, in addition to the weekly food distributions, the pantry has handed out more than $1,200 in gift cards since Thanksgiving for families to buy food and necessities, Biondo said. The gift cards were donated by faculty and staff, as well as the college Faculty Association, the college Guild of Administrative Officers, and the college's Sister Mary Ann Helping Hand Fund, which was started by the college foundation.

Upon Borrello's retirement, the college will name the food pantry after her, to honor the longtime professor's contributions, Biondo said.

Now lined with well-stocked shelves, refrigerators and freezers, the pantry serves hundreds of students and staff, part-time faculty at the college, as well as members of the local community every year — all from humble beginnings as a Thanksgiving food drive, Borrello and others said.

This semester alone, the pantry has served about 700 people from across the college and immediate community with weekly food supplies, Biondo said.

Borrello also started various extracurricular programs at the college, including an evening common hour for commuter students, and a Friday movie series — years before a "campus activities office" would open dedicated to continuing such events that foster community among students.

"People consider her the go-to person for organizing all kinds of efforts on campus," Liebert Marx said. "She really is the essence of the Grant campus."

Borrello, who has two master's degrees in sociology and philosophy from St. John's University, has taught various courses over the years, focused primarily on culture and social sciences. She taught cultural anthropology, a course on death and dying, and established a course on the anthropology of religion, Liebert Marx said.

Called Sister Mary Ann because she has been a member for 60 years of the Dominican Sisters of Sparkill, the Bronx native with Italian and Polish descent became interested in the study of other cultures after joining the sisterhood, she said.

As a young sister, she was sent to teach children in areas of the Bronx with large Puerto Rican communities and was moved to learn more about their culture to gain a better understanding of the community she was serving, she said.

"It really sparked my curiosity, and I researched various aspects of their culture for a good number of years," Borrello said.

After the COVID-19 pandemic forced classes to go virtual, Borrello said, she felt it was time to retire, finding difficulty with the online platforms.

"My favorite part about teaching is the interaction with the students, and going online is a totally different way of life," she said.

Robert "Bob" de Zorzi, of Mount Sinai, remembers being the head of the social sciences department in the 1970s, when Borrello started the food pantry.

"She came to me and said, ‘We have to do something for people for Thanksgiving,’ " said de Zorzi, 78. "I said, ‘OK, Mary Ann, what do you want me to do?’ And she said we would have a food drive collecting food for families in the community. It was terribly important for her to do it, and it became important to the rest of us, too."

It started with a Thanksgiving food drive and eventually evolved into a year-round collection to serve the community, as well as campus students.

"It's interesting because when you start something, you never know it's going to become so important," Borrello said. "I just knew I had to do it."

Now the pantry is about the size of a large office, Borrello said, located in Nesconset Hall, which houses other campus offices. It gets many student volunteers throughout the years.

"I think the biggest thing I learned was that you never know who really needs help," said Dakota Kennedy, 24, of Brentwood, who volunteered at the pantry from 2015 to 2017 while he was a student at the college. He often helped Borrello with heavy lifting, transporting turkeys from freezers in other campus buildings, and organizing various foods, he said.

"She was always very sweet, kind and patient," Kennedy said of Borrello. "Till this day, I’m always trying to do what I can to help and always be kind to others."

After years of being busy running the pantry, other charitable events and her classes, Borrello said she plans on staying low-key in retirement and spending leisure time with her lifelong best friend, Sister Peggy Stadelman, who's also from the Dominican Sisters of Sparkill.

De Zorzi recalled other instances of his friend helping her students beyond the classroom, in ways big and small.

"It was the little things. One time, there was a good student who didn’t have money to cover his tuition for his final semester," de Zorzi said. Borrello asked de Zorzi and "everyone she knew" to help raise money for the student's tuition, and eventually raised enough for him to complete the semester, the retired professor said.

"I don’t know if you call that little things or big things, because for that kid it was a big thing," de Zorzi said. "She brings out the best in you, she really does. She forces you to do things you should do, that you might well not have done."