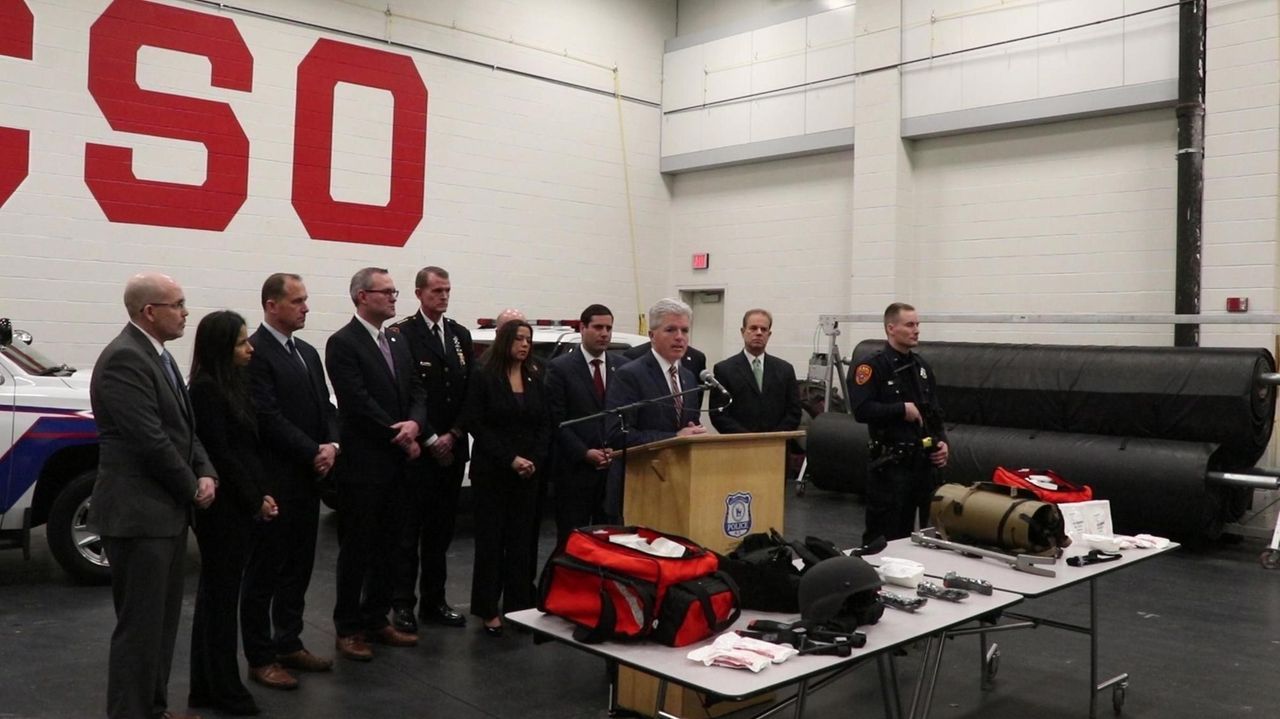 Authorities in Suffolk County have unveiled a new initiative aimed at getting eyes inside a school in case a violent situation should occur, such as an active shooter like the one in the Parkland, Florida, high school.

School districts could allow Suffolk County police to access school security cameras to help first responders plan their response if a shooter is in a building, officials announced Friday.

The Sharing to Help Access Remote Entry initiative, or SHARE, would help officers relay key information and allow doors to be locked remotely at schools with that capability, officials said.

“This new initiative will give the police department the ability to have eyes on the school with cameras if an incident occurs so they can see inside the school and determine exactly where to go,” Suffolk County Executive Steve Bellone said Thursday at the Suffolk Police Academy in Brentwood. “Seconds matter. It makes a difference how long a response is.”

Suffolk police could only access security cameras in an emergency situation and school officials would be notified when it happens, authorities said. Access would be denied if misused, officials said.

During an active shooter situation, officials at police headquarters could access the cameras and, in turn, relay the video to responding officers, who could watch the images on their department-issued tablets in their patrol cars, officials said.

“By being able to see what’s occurring, our officers will be forewarned what this guy looks like and where he is,” acting Suffolk Police Commissioner Stuart Cameron said. “So instead of coming through the visitor entrance, for example, and having to run through the entire high school, we can drive to closest entrance.”

The new measures supplement other initiatives the police department has put in place to quickly take out an active shooter.

Officers now have more long guns and do more patrols, officials said. Officers also now carry more equipment in their patrol cars, including helmets, reinforced bullet-resistant vests, and Halligan tools, which are used to break down doors. The equipment allows officers to gain entry to a school during an active shooter situation, authorities said.

The new measure is funded with asset forfeiture money, homeland security funds and capital funding from the county, officials said.

Although school districts had not formally committed to the program, officials said several had shown interest and a meeting was expected to take place at the Wind Watch Golf and Country Club in Hauppauge on Thursday.

Schools in Nassau County also have measures in place to combat active shooters, which include remote access to cameras.

Nassau County school districts have access to the Rave Panic Button, a cellphone app that allows teachers and school administrators to notify authorities if an active shooter is inside a building, officials said.

The alert does not go through a traditional call log where other emergency calls are fielded. Instead, it’s given its own call log and police are dispatched immediately. The system also allows police to access school security cameras so they can make a plan for an active shooter.

School districts in Nassau County have the option of being outfitted with the Rave app, a system through which Nassau police commandeer school surveillance cameras.

David Flatley, president of the Nassau County Council of School Superintendents, said the system was necessary.

“At first blush it sounds redundant to the 911 system, but redundancy in safety matters is a very good thing,” said Flatley, also superintendent of the Carle Place school district. “I also value the fact that people who might engage the Rave system can do so silently whereas a regular 911 call requires a conversation.”

So far, 40 of the 56 Nassau school districts have the phone app, officials said. Now private schools are inquiring about getting the app, according to Police Commissioner Patrick Ryder.

Sheriff: Man drove drunk with gun into jail parking lot
COVID cases continue to decline on LI — but what about risk?
Timeline: How the shooting of NYPD officers unfolded
1:37
Dogs help sniff out potential trouble at JFK
On the front lines of omicron: It 'hit us like a tidal wave.'
Wounded cop 'fighting for his life' after fellow NYPD officer shot dead
Didn’t find what you were looking for?