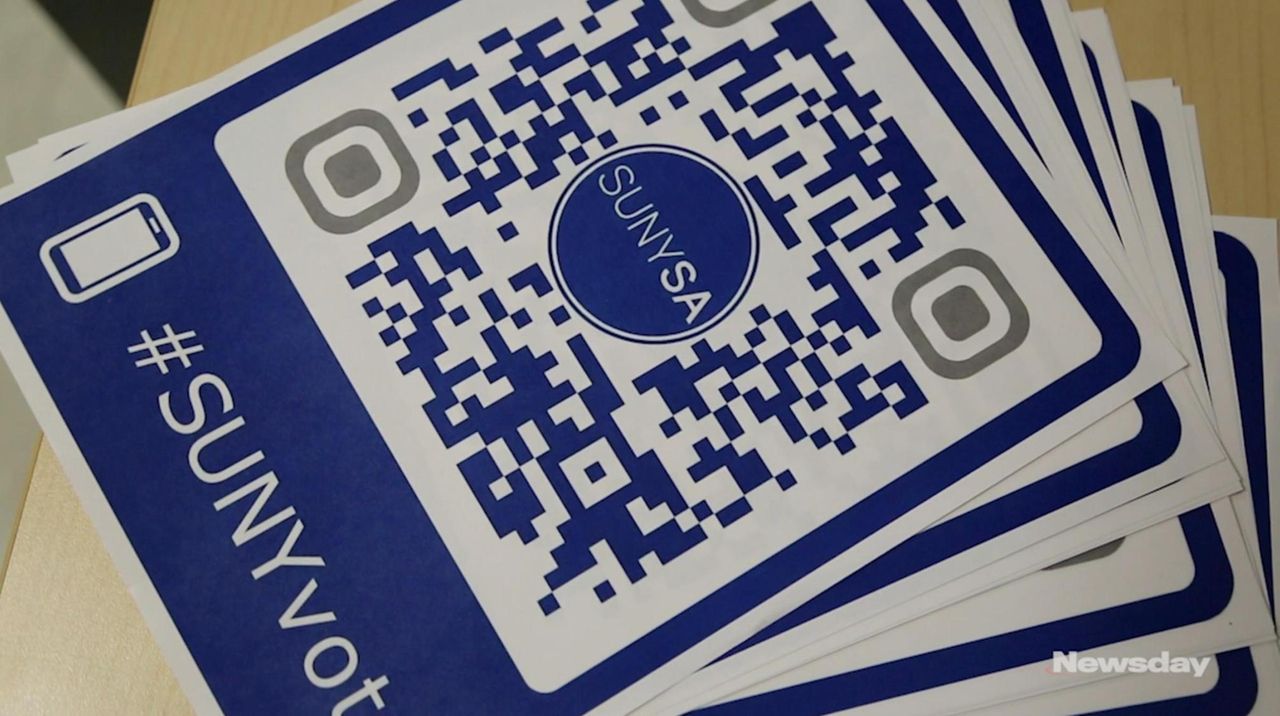 On Friday, the SCCC Student Government Association prepared to launch a #SUNYvotes campaign, using posters with QR codes to encourage students across the multiple campuses to vote.   Credit: Barry Sloan

SUNY student leaders on Long Island and across the state will kick off a campaign Monday aimed at increasing voter registration and participation among college students before the Nov. 6 midterm elections.

“Historically there’s been low turnout from young voters at midterm elections,” said Michael Braun, 23, an Elmont native and president of the SUNY Student Assembly. The outcome of midterm elections can have a critical impact on federal and state policies that impact students, such as student debt, campus safety and environmental sustainability, the student-led organization said.

The Student Assembly officially will kick off the #SUNYvotes campaign as it aims to engage the more than 600,000 students across the 64-campus system. More than 86,000 are enrolled in the five state institutions on the Island — Farmingdale State, SUNY Old Westbury, Nassau Community College, Stony Brook University and Suffolk County Community College, according to preliminary fall data.

“This is just the first step in showing that student voices will be heard at all levels of government," Braun said, adding that the effort is nonpartisan. “We just want to make sure the students have the resources they need, so that they’re prepared for November.”

The deadline for voter registration before the midterm elections is Oct. 12.

Student governments are setting up voter registration tables at local campuses and are pushing the message on social media.

A key aspect of the effort is the Student Assembly's partnership with BallotReady, a data aggregation service that aims to educate young voters about candidates and issues in a nonpartisan way.

BallotReady provides student organizers with QR codes that can appear on posters and be embedded in social media posts. Starting Monday, when students scan the QR code with their smartphones, they'll be directed to a website where they can type in their address and see the names of candidates who will be on their ballot. The site also will provide background information on the candidates, including their stances on issues, who is endorsing them, their previous experience and level of education, and links to their websites and social media, BallotReady CEO and co-founder Alex Niemczewski said.

SUNY is the first education system nationwide to partner with the Chicago-based social enterprise, Niemczewski said.

“SUNY’s enthusiasm for this tells me that there’s this huge motivation coming from young people at SUNY,” she said. “That makes me feel very excited about the future. It’s an opportunity to turn all these people into lifelong voters.”

The service is $6,500 annually, a cost shared by the Student Assembly and system, according to SUNY.

Kristen Quere, who is Student Government Association president of SCCC Michael J. Grant Campus in Brentwood, was out with other students Friday hanging posters featuring the QR code.

"If something is at their fingertips like everything else is in society today, I think they would be more prone to research their candidates and be more educated," she said of BallotReady.

The #SUNYvotes campaign and partnership with BallotReady came from recommendations made by a task force created by the SUNY board of trustees, board chairman H. Carl McCall said. Gov. Andrew Cuomo had called on the agency to help investigate why student participation in voting was so low, he said.

“We just have to get that message across that all elections are important, that our democratic process rests on having the people be involved in making decisions, and that’s what elections are all about,” McCall said, adding that he’s proud of the student-led effort.

As part of the campaign, student government groups on the Island have been partnering with organizations including the League of Women Voters, which recently had voter registration events at Stony Brook and SCCC.

Stony Brook Undergraduate Student Government president Justas Klimavicius said his organization is hoping to work with the university’s Center for Civic Justice, which focuses on voter engagement on campus.

They’ve put signs on campus, handed out flyers and have been posting to Facebook and Instagram, said Klimavicius, 21, of Port Jefferson, a business and political science double major. It's crucial to get students involved, he said. “You can write as many letters as you want — if the right people aren't in office, the changes that you personally want to see as a student won’t happen.”

Farmingdale State student government leaders have been working with social justice clubs on campus to get the word out, said Jahad Hoyte, executive vice president of the college’s Student Government Association and the SUNY Student Assembly's agricultural technology representative.

Farmingdale, SCCC, Stony Brook and other campuses across the system also hosted an event earlier this month encouraging students to register.

Hoyte said they plan to keep the energy going, fielding students’ questions and promoting BallotReady, which is making it “a lot easier for the students to be actively involved.”

It’s really about the students having a voice, said Hoyte, 20, a junior aviation administration major.

“We’re entering a new era in politics, and by entering this new era, what we need to do is we need to have voices from the younger generation.”