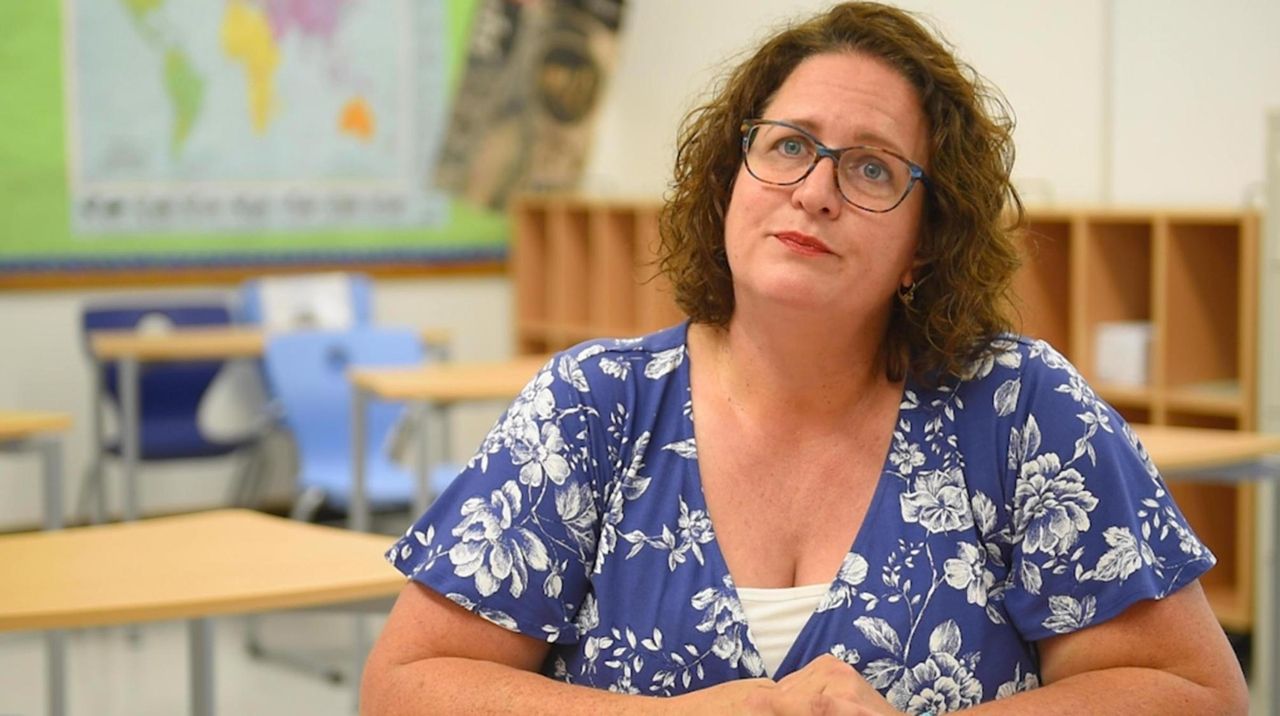 Jennifer Wolfe, an Oceanside social studies teacher, has been named New York State Teacher of the Year. Wolfe has helped many fellow teachers obtain National Board certification. Newsday spoke to her on Sept. 11. Credit: Johnny Milano

An Oceanside educator who has spent 20 years promoting professional growth for classroom teachers was named the state's 2021 Teacher of the Year on Monday.

Jennifer Wolfe, a social studies teacher at Oceanside High School since 1997, was recognized at a virtual morning meeting of the state Board of Regents. The board sets academic policy for state schools.

Wolfe's new title comes with a $1,500 award and a chance to compete for national Teacher of the Year, to be announced in the spring. In addition to Wolfe, the state honored four finalists, including Victoria Gentile, a Kings Park special education teacher.

Wolfe wiped away tears Monday as she spoke online to Regents about the experiences of teachers statewide who are taking on responsibilities never assumed before due to the COVID-19 pandemic. One example is the need to simultaneously teach students in classrooms along others remaining at home.

"We are all first-year teachers this year," Wolfe said.

Wolfe also contended that the health crisis underscores the need for school faculty not only to serve in classrooms, but also to consult as professionals on issues affecting entire schools and districts.

"It's important that teachers take charge of their profession, because we're the ones in the classrooms doing the work," she said in an interview last week.

One way teachers can confirm their professional expertise is by earning advanced credentials. Since 2002, Wolfe has helped the region expand a form of credentialing known as National Board certification, run by a nonprofit agency in Alexandria, Virginia.

To win certification, teachers must pass national exams in their subject areas, while also submitting video samples of their classroom lessons, along with written papers. The process requires about 300 hours' work, often spread over two or three years.

Wolfe, after earning her certification in 2002, encouraged colleagues both in Oceanside and across the Nassau-Suffolk region to join in the movement. Two dozen teachers in Oceanside alone now hold national certification — the highest number for any school system in the region, supporters said.

In recruiting candidates, Wolfe displayed the same sort of drive that once made her a winning lacrosse coach. Todd Nussen, who teaches world history at Oceanside High, recalled when Wolfe encouraged him to apply for certification several years ago.

Wolfe, who had helped other colleagues prepare for certification, promised to help Nussen as well. As Nussen recalls the conversation, Wolfe went on to note that he and his wife were about to have a baby, adding: "Listen, when you have to get up for a feeding at 2 a.m. in the morning and can't get back to sleep, you can work on your national certification."

Statewide, 2,114 teachers hold certificates. Albany encourages this to a modest degree, by providing teachers with grants paying three-fourths of the $1,900 in certification fees.

Certification supporters think New York should up its game — possibly through statewide pay-raise incentives for teachers who earn such credentials. Supporters point out that North Carolina, with a little over half the population of New York, has 22,653 teachers with national certification.

Roger Tilles, a Manhasset philanthropist who represents Long Island on the Regents board, formerly served on the national certification board. Tilles sees particular value in a certification process that requires teachers to reflect deeply on the nature of their occupation.

"For example, you can better face up to a pandemic like this, because you learn to think about how you teach and not just go through the motions," Tilles said.

Tilles went on to praise Wolfe as an educator willing to think outside the box.

Jolene DiBrango, executive vice president of the New York State United Teachers union, saluted Wolfe Monday as one who "sees herself and her colleagues as leaders."

Some educational experts outside the state describe Wolfe as a driving force behind efforts in her region to provide teachers with greater professional authority.

"Jen's courage to do what is right for students and teachers is the leadership we need during this difficult time," said Lisa Clarke, a director at the National Board for Professional Teaching Standards. The board sponsors certification.

In addition to her work on advanced certification, Wolfe also supports faculty mentoring for teachers just starting their careers. She's a leader in an Oceanside program that provides four years of intensive help for teachers seeking to earn job tenure, including videos of the teachers' classroom work reviewed by other faculty members.

Wolfe is a three-time recipient of Fulbright grants, which paid for educational travel abroad. In 2005, she was named the state's High School Social Studies Teacher of the Year.

Phyllis Harrington, superintendent of Oceanside schools, wrote a two-page letter nominating Wolfe for Teacher of the Year. The letter closed by describing Wolfe as a "superstar."