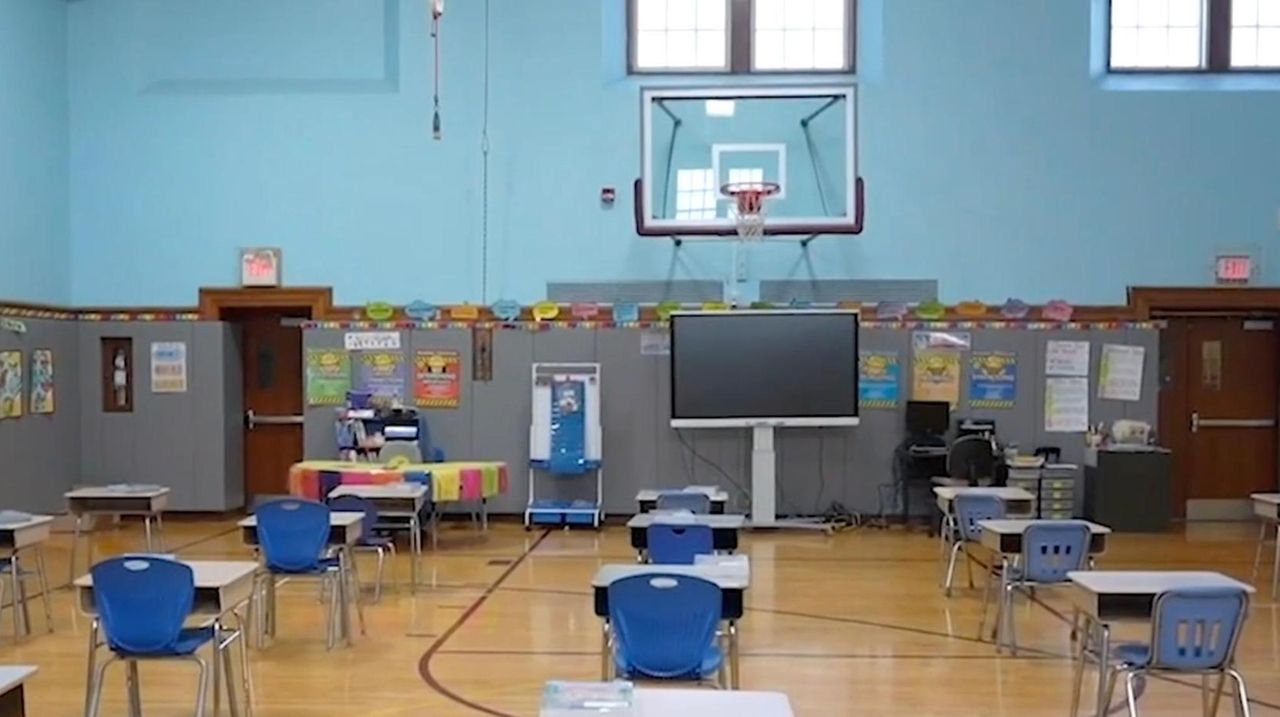 Education advocates say pay scales that provide tens of thousands of public school professionals on Long Island with annual salaries of $100,000 or more are necessary to recruit and retain staff in one of the nation’s most expensive regions to live.

That position collides with critics' complaints that rising school costs place a perennial burden on taxpayers, and on school districts, which annually must pass budgets to avoid fiscal stress.

Teacher representatives and some education analysts make the case that the attractive pay scales are necessary because of the Island's cost of living.

"Let's just talk about cost of living on Long Island — cost of living is high," said Perry Fuchs, president of the teachers union in Plainedge and a science teacher in that district. "So how would you expect teachers to live here, if they're not paid?"

Newsday did the analysis amid calls for higher salaries nationwide for teachers after they worked remotely and in-person through the worst of the COVID-19 pandemic. The payroll numbers were obtained through the state's Freedom of Information Law.

Teacher representatives contend that working under trying pandemic conditions has underlined the worth of those in charge of classrooms.

"This past year has shown like no other just how dedicated New York's teachers are to ensuring that our children receive a high-quality education," Matt Hamilton, spokesman for the New York State United Teachers union, said in a statement to Newsday. "NYSUT is proud to support hundreds of thousands of educators who deserve fair pay and benefits that reflect their hard work and high levels of expertise and education."

NYSUT, an influential union umbrella group, represents teachers and other educators both Islandwide and across the state.

On Long Island, teacher raises have prompted debate, especially in districts facing fiscal stress. Such was the case in May with Wantagh, a school system serving a middle-class community on Nassau County's southern shore.

By mid-May, the 2,600-student district faced a dilemma. Its initial budget proposal of $83.5 million, carrying a 3.82% tax hike, failed to win the 60% voter majority as required to override the state's tax cap. Wantagh had a state tax levy cap of -0.61%, which meant the district would have had to reduce its spending to stay below the cap, the district said.

A second voter rejection would mean a tax freeze, but the budget later passed with a 1.96% tax increase.

Professional payrolls, totaling more than $5 billion annually, represent the biggest single expense in Long Island's 124 districts. In 108 of those districts, the median or midpoint salary for full-time classroom teachers exceeds $100,000, Newsday's analysis found. Jericho led the way, with median pay of $153,304, followed by Cold Spring Harbor at $139,647 and Syosset at $135,828.

Overall school district spending accounts for about two-thirds of property taxes in the region.

"If you do a poll and ask people for their number one issue" living on Long Island, "they'll say taxes, and that's property taxes, and about 60% of that is the school district," said Michael Dawidziak, a pollster and political consultant based in Sayville.

"But I don't think they tie that exclusively to teachers' salaries," Dawidziak added. "Costs have also gone up in other areas, such as administration, artificial turf on ballfields, and so forth. And besides, one thing people understand is that school quality is tied to good teachers, and also to high property values."

"Once the kids are gone, they're off to Savannah or Asheville or wherever," said Vecchio, who also is associated with a regional group, Long Islanders for Education Reform. "I wish that weren't the case, that you wouldn't be driven out of the place where your home is and where your friends live and where you hoped you could grow old. But that's the truth."

The U.S. Bureau of Economic Analysis, a federal agency, calculates that living costs in the New York metropolitan area, which includes Long Island, run 25.7% more on average. The calculation is from 2019.

To calculate payrolls, Newsday drew on compensation records kept by the New York State Teachers Retirement System, which ranks among the 10 largest public pension funds in the nation. The records cover both teachers, the largest group, and school administrators and other professionals, such as guidance counselors, librarians and social workers. Compensation includes both salaries and other payments, such as retirement payouts, coaching fees and stipends for teaching summer school.

Figures for median teacher salaries and numbers of professional employees came from separate records kept by the state Education Department. The latest records there also are from 2019-20.

The area's three top-paid educators from 2019-20 worked in Central Islip, explained partly by hefty severance packages that go to retiring workers for unused vacation time — a common feature of contracts on the Island. They were Kevin Donovan, a former science and physical education teacher who collected $509,312 during his last year on the job; Thomas Kuhn-Manfredi, a former kindergarten teacher who left with $503,028, and Ada Nieves-Brull, a psychologist who departed with $402,208.

Statewide, the National Education Association, a union group headquartered in Washington, D.C., estimates that New York paid an average $88,284 per teacher in 2019-20, with California close behind at $85,390.

Low compensation in such states has prompted a growing number of political leaders to call for higher pay. President Joe Biden has said his American Families Plan, which proposes to expand free preschool and offer free community college education, would provide a "$9 billion investment in educators."

"You deserve a raise, not just praise," Biden told thousands of applauding NEA representatives at a national meeting on July 2.

Biden did not cite a specific salary figure, but others have. In May, the opinion section of The New York Times carried an article headlined "The Case for Paying All Teachers Six Figures."

The author, Colette Coleman, a former Los Angeles middle school teacher, reasoned that six-figure incomes would serve as an incentive for teachers emerging from the COVID-19 pandemic to stay on the job.

The idea of six-figure salaries has been pushed before, but usually proved elusive. In 2018, Texas Gov. Greg Abbott called for more top teachers there to earn $100,000. At the time, the state's largest newspaper, the Houston Chronicle, reminded readers that only about 400 teachers in the state earned more than that amount.

In New York, the picture was different. By 2018, the state already had nearly 59,000 educators drawing six-figure compensation, according to the Empire Center for Public Policy, an Albany-based research and advocacy group. The center also reported that the percentage of highly compensated school professionals had almost doubled since 2008-09.

"New Yorkers pay some of the highest property taxes in the nation, most of which go to pay for teacher and administrator salaries," said Tim Hoefer, executive director of the center at the time, in releasing the report. Hoefer is now president and CEO.

The Empire Center tracks costs of state and local government and posts the information on its website SeeThroughNY.

On LI, raises have prompted debates

Superintendents have had to explain in detail their budgets to voters.

At a heated public meeting on May 25 in Wantagh, Superintendent John McNamara and other administrators sought to explain why the district found it difficult to hold down spending and tax increases, even though the budget called for staff cuts. Behind them, a PowerPoint presentation flashed across a screen with a list of major cost drivers.

First item on the list: "Salary increases: $1,249,842." Another presentation chart showed that teacher raises, as called for in their contracts, accounted for $952,980 of those increases.

McNamara told attendees the district polled residents after the first failed budget vote in May, that most respondents agreed on holding a revote, but that many still had reservations.

"A lot of the feedback we received in the survey was, 'Please, why are people getting raises in a time period when everybody is being hit by the pandemic and people are struggling financially?' " McNamara said.

The superintendent went on to say that unionized employees had been asked if they would help the district financially by giving up some contractual pay, but that most, including teachers, had declined.

'How could we expect people to become teachers if they're not compensated adequately ...?'

- Perry Fuchs, president of the Plainedge Federation of Teachers union

That drew a rejoinder from Fuchs, the Plainedge Federation of Teachers union president who was in the audience. He is the father of a Wantagh first-grader.

"Contracts are not the problem," said Fuchs, who went on to defend teachers' raises. "The issue does not lie with our employees. How are we going to retain — never mind, retain, I'm sorry, attract, right? — and keep good employees if we don't pay, if we can't afford to live here?"

Fuchs said raises in Wantagh were comparable to those in other systems.

On June 15, Wantagh residents by a wide margin approved a scaled-down $82.7 million budget with the 1.96% tax increase. Trimming the budget meant the loss of 28.5 jobs, including administrators and teachers, along with larger elementary class sizes and fewer middle school sports teams, district officials said.

Fuchs and other unionized teachers helped campaign for budget passage, on grounds that a second voter rejection would worsen the situation. Fuchs, who serves on a regional steering committee of districts' union presidents, said teachers must contend with a lot of things.

"The state is constantly adding to requirements to be a teacher — master's degrees, certification, renewal of licenses," he said. "Demands put on educators are increasing every year. How could we expect people to become teachers if they're not compensated adequately for all the time, money and effort required to become an educator?

"And lastly, teachers are the ones who educate everybody. Nobody becomes a lawyer, nobody becomes a doctor or CPA, without being with a teacher first."