A month after the state allowed teachers to receive the COVID-19 shot, many Long Island instructors said they are frustrated and scrambling to make appointments amid the chaotic rollout and vaccine scarcity.

Teachers, left on their own to find the coveted shots, said they're feeling an urgency to be vaccinated as districts move more toward full-time instruction. They said they're spending hours online — even trying in the middle of the night — and asking their spouses to search for appointments during the day while they teach.

Many appointments are filled as soon as they open, said Robert Dillon, Nassau BOCES district superintendent. The Nassau County Health Department recently announced some 2,500 spots for teachers and "they were gone in 20 minutes," he said.

There's no official tally on the number of Long Island teachers and staff who've received the vaccination, but Dillon and other local educators said they suspect a great many have not received their first dose.

The state announced teachers and school staff were eligible on Jan. 11. Long Island has 36,855 teachers, according to the state Education Department.

A survey by the National Education Association found that only one in five of its members — or 18% — have been vaccinated, and an additional 17% have scheduled an appointment to receive one. The national poll of 3,305 NEA K-12 members and 177 higher education members was conducted from Jan. 27 to Feb. 3.

A few Long Island districts, including Garden City, Mineola, Roslyn and Eastport-South Manor, have been able to get ahead of the pack by setting up mass "vaccination days" for their staff. They worked with a hospital group and an urgent care, but those arrangements have all but dried up because of a dearth of vaccine, education officials said. 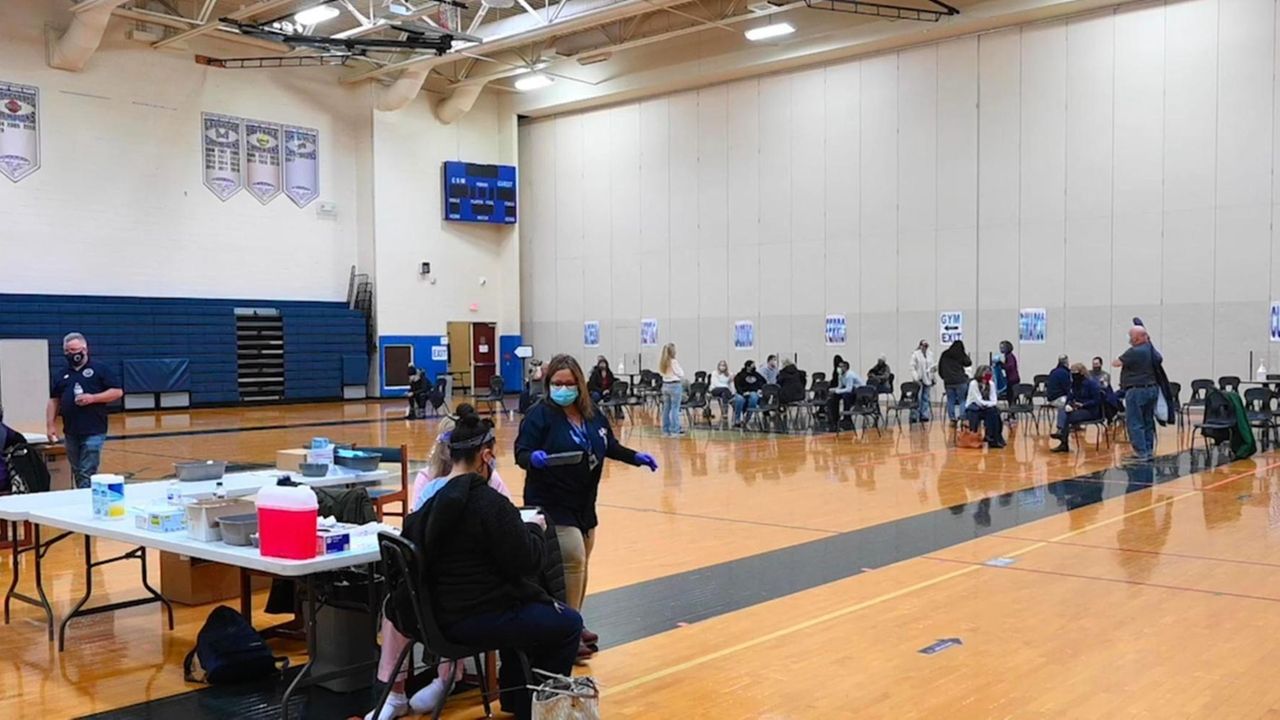 School district gives hundreds of vaccines to faculty, staff The Eastport-South Manor Central school district distributed about 300 COVID-19 vaccines on Feb. 6 after the district was able to obtain them from a Long Island Urgent Care. Newsday's Steve Langford has the story. Credit: James Carbone

For now, efforts to score an appointment have bordered on the epic.

April Hatcher, a librarian/information specialist at Ward Melville High School in East Setauket, said when district officials gave out a computer link for the shot last month, teachers and staff jumped at the chance, resulting in the website freezing up, delaying people's entry and throwing them off the site midway through the process.

"It was like they were giving out gold and everybody wanted a piece," said Hatcher, of South Setauket.

At one point, Hatcher was marshaling her computer, phone and iPad at the same time. She finally got a Jan. 31 appointment at Stony Brook, but then the state canceled it, along with about 20,000 others. State officials said the sign-up web link had been improperly leaked.

"The next day, everybody came into the school and were really beat down," Hatcher said.

The link came up again days later, and Hatcher said she typed at top speed to score an appointment. She received her first shot Feb. 8.

School systems across the country have come under pressure to fully reopen in-house instruction, as many have used remote and hybrid learning during the pandemic. Nationally, only about half the states currently are allowing teachers to receive the shot.

In New York, about 7 million people, including teachers, are now eligible to receive the vaccine, according to the state COVID-19 website.

The federal government is gradually increasing the weekly vaccine supply to the state, with a total of 529,325 doses for first and second shots delivered in the first week of February, the state website said. But New York's distribution network and large population of eligible people still exceed the supply coming from the federal government, state officials said.

Rochelle Walensky, the recently installed director of the Centers for Disease Control and Prevention, has said that vaccinating teachers shouldn't be a prerequisite for the safe reopening of schools. But White House press secretary Jen Psaki later walked back that assessment, saying the CDC hasn’t yet issued official guidance.

Schools have not been identified as a major vector for COVID-19 transmission, and there has been widespread use of safety measures such as masking and social distancing.

Many Long Island school officials said vaccinating teachers and staff is essential to the safe reopening of schools. They said the economy cannot come back without schools being fully reopened. With remote or hybrid learning, many parents must stay home to monitor or help their kids.

"Schools need to be open, and teachers are vital," Dillon said. "If you don't have teachers, it's very difficult to have your workers working."

English teacher among lucky ones

Carlo Rebolini, an English teacher at Garden City High School, was among the lucky ones, but getting the inoculation didn't come easily, he said.

As soon as Rebolini learned that teachers qualified for the COVID-19 vaccine in January, the instructor jumped on his computer to schedule a shot. He checked availability at Jones Beach and other places, but the soonest appointment was April.

Then, Garden City school officials announced in mid-January they had made an arrangement with NYU Langone Hospital-Long Island to provide hundreds of vaccinations for teachers and school staff. Rebolini, 61, of Nesconset, received his first inoculation last month and the second days ago.

"It gives me great relief," said Rebolini, adding that the vaccination effort has calmed the school atmosphere. "People are less stressed. There's less concern about overall safety, and a general feeling that we might resume normal activities."

Before he received the vaccine, Rebolini said he felt increasing anxiety about the virus that was spreading across the country and spawning more contagious mutations. As students returned in January, the district was moving toward more full-time, in-person instruction, which meant more children in his class, he said.

"I was concerned about bringing [the virus] home to my wife," he said.

At home, his wife, Linda, also was concerned. So, each day when Rebolini, who said he has high blood pressure, arrived home from work, he would change his clothes and wash up "before touching anything."

He said he sees the vaccine as the beginning of the end of the coronavirus nightmare, and hopes that by the end of this school term the district can stage traditional proms and graduations.

The superintendent of his district, Kusum Sinha, recalled how she scored the mass vaccinations.

The weekend after the state announced teachers and school staff were eligible, Sinha said she sent an email to NYU Langone asking if it could help provide shots to her workers. It was, she added, a shot in the dark. By that Monday, Jan. 11, they agreed and she sent the hospital group a list of teachers and staff.

"Sometimes timing works and the stars align," Sinha said. She believes many of her 700 employees received the vaccine.

Educator: Students are hurt the most

Brandy Scott, president of the Long Island Black Educators Association, said that until schools are fully open and safe, students are the ones bearing the brunt of the damage.

Remote learning, Scott said, has led to more absenteeism and students losing a sense of how to relate to others. Some students have become apprehensive to try new things or even raise their hands to ask a question, she said.

It's especially important to provide vaccinations in low-income communities, many of which have suffered the most from the pandemic, she said.

The anxiety over the virus is especially high among teachers in low-income communities, some of which have high infection rates, said Dafny Irizarry, president of the Long Island Latino Teachers Association.

Irizarry, who teaches English as a New Language in Suffolk, said she sees vaccinations as key to bringing back all students.

"Bringing students back is urgent. There's been a tremendous loss of learning," she said. "We're still struggling."

How to get a COVID-19 vaccine appointmentFor Long Islanders still looking to get a COVID-19 vaccine, these resources might help. More students returning means more kids on school busesLong Island school bus operators say they've seen a steady increase of passengers, as infection rates for the coronavirus have fallen in recent weeks. Some districts feeling safer, bringing more back in-personThousands of Long Island students are returning to a bit of familiarity they haven't experienced since the COVID-19 pandemic struck: more time in school with their peers. State struggles to keep up with demand for vaccines from newly eligible The state's vaccine scheduler was in high demand but officials said it was still functioning. Also Sunday, Gov. Andrew M. Cuomo extended the hours of gyms, bars, restaurants and other businesses till 11 p.m.