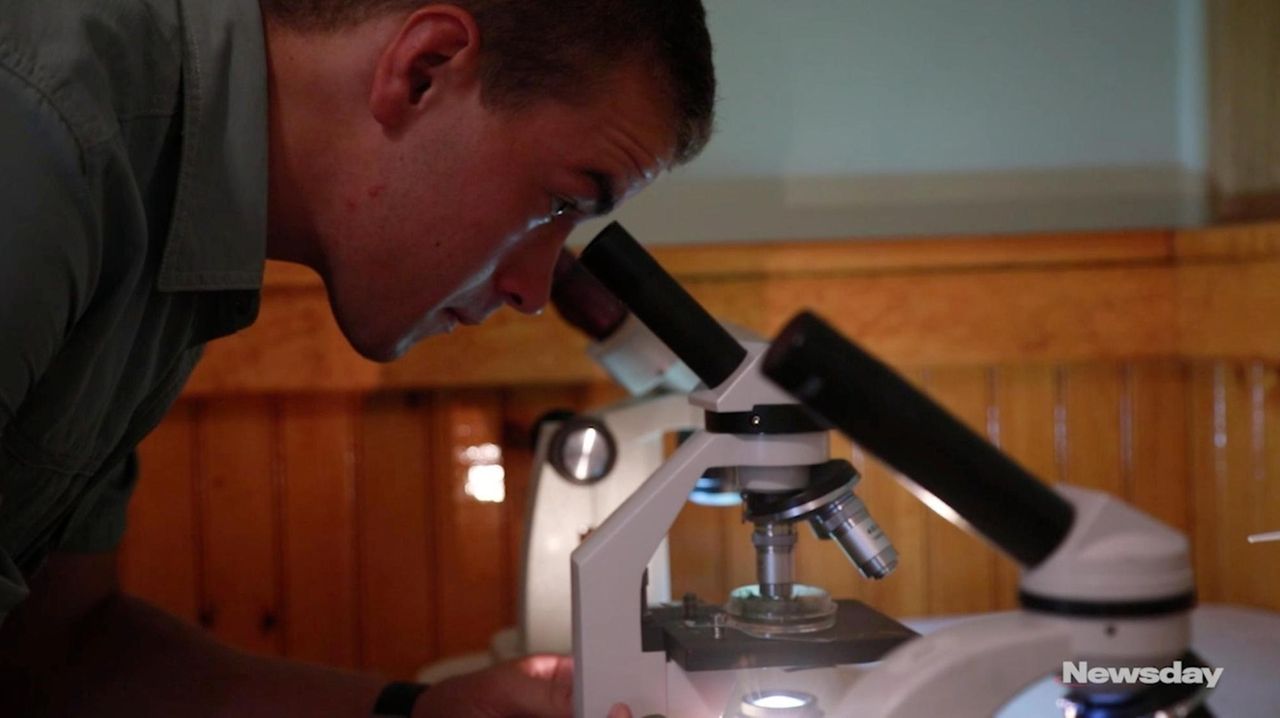 Hofstra University professors took a group of local science teachers through Hempstead Lake State Park on July 12, part of a summer workshop to learn about Long Island's environment, geology and coastal resiliency. The educators plan to put this knowledge to use in their classrooms. Credit: Newsday / Shelby Knowles

A group of Long Island teachers listened attentively, water bottles in hand and backpacks strapped on, as they settled into their roles as students for the day on a trek through Hempstead Lake State Park.

The field trip, on Day Three of the “Living with the Bay” workshop, aimed to school the teachers about the lake’s biodiversity and the harm of plastics to the environment. About a dozen elementary and secondary school teachers followed Annetta Centrella-Vitale, Hofstra University's director of sustainability studies, along the park's dirt paths and across its grass plains to the lake, where a freshwater sample was collected to be studied and compared with saline water.

The focal point of the experience for the teachers: Come September, to share new knowledge with their students in the Amityville, Valley Stream and Sayville school districts and several parochial and private schools, including St. Patrick’s School in Huntington, North Shore Hebrew Academy in Great Neck and Notre Dame Catholic School in New Hyde Park. The educators came from 10 districts and schools.

"I wanted to bring more information, more hands-on activities in for my students," said Lawrence Puccio, who teaches physical and life sciences at North Shore Hebrew Academy. "I can bring in a rain garden now. I can also teach them more about aquifers. And having them do it hands-on, they learn a whole lot more than they ever would reading it in a book."

The workshop was born of what had been a catastrophe for thousands of Long Islanders — superstorm Sandy, which caused widespread destruction when it hit Oct. 29, 2012, flooding communities, felling trees and downing electrical lines.

A portion of federal funds for renewal provide for the $125 million "Living with the Bay" initiative, administered by the Governor’s Office of Storm Recovery. It aims to restore sections of the Mill River in the Town of Hempstead and increase the resiliency of communities along its watershed and the South Shore’s bays.

One focus area of the broader initiative is social resiliency, and that is where Hofstra and the teachers in the workshop — the first of its kind — come in. Community organizations and educational institutions are encouraged to develop academic approaches to teach students and the public about the local environment and its history.

This year marked the first of Hofstra’s three-day “Living with the Bay” curriculum development and teacher training workshops, led by Centrella-Vitale and Amy Catalano, an associate professor at Hofstra’s School of Education. Hofstra plans to offer the workshop for at least two more summers.

Catalano designed an earth science and living environment curriculum centered on promoting social resiliency through education, with the teachers' workshop meant to serve as an introduction to the curriculum. It incorporates lesson plans for students in third through fifth grades, as well as for middle and high school students. If implemented, it would cover one or two units of an earth science course.

With knowledge gleaned from the workshop, she said, educators should be well equipped to pose pertinent questions to their students: What can you do to change your environment, or adapt to it, after a storm? What kinds of soils work best when you have excess water? How do plants help water get into the ground more quickly?

“We built it up that way so that people can understand, ‘OK, you need less pavement, you need more plants, you need certain kinds of plants,' ” she said of the workshop. “As we build up, the teachers understand a repertoire of what is needed to have a resilient community on Long Island, so that we can keep our water clean, but also have less of a disaster after a hurricane, like we did in superstorm Sandy.”

Besides the workshop, there are several other components to Hofstra's involvement. Those include a sustainability certification program for local officials, a summer science research program for high schoolers and training for construction workers, said Lawrence Levy, the project director and executive dean of the National Center for Suburban Studies at Hofstra University.

The first day of the workshop had the teachers sitting in a Hofstra lab room for lectures by Centrella-Vitale and Catalano and hands-on scientific activities and experiments — with examples both on an elementary and a secondary level — that could be practiced with their own students.

Puccio, who teaches sixth through eighth grades, said he plans to take a lesson about storm runoff and watershed activity back to his classroom. In the exercise, students crumple a piece of oak tag, spread it out to replicate a watershed area, with the bumps representing ridgelines, and then color it in with water-soluble markers. Once it is wet, they actually can see where surface runoff would go.

For Puccio, educating his students about the environment’s health takes on extra meaning because some of them will be voting in about five years.

“They need to be informed citizens,” he said. “They need to make some informed decisions and have some background. They don’t have to know everything, but they should at least be able to tell what’s right and what’s wrong.”

On the workshop's second day, the educators went on a field trip to the Hempstead Plains Education Center, learning about the importance of native plants to Long Island’s ecosystem and the role of vegetation — and prairies, in particular — in filtering rainwater to aquifers. They also discussed potential activities for their students if they were to bring them to Hempstead Plains, such as having them write about the specimens, make observations or count members of a species spotted around the nature preserve.

Sima Lis, a special education science teacher in the Elwood school district for grades seven through 12 and a self-proclaimed perpetual learner, said she had not been too familiar with superstorm Sandy's connection to the environment, as much of the news coverage focused on destruction of property.

Lis plans to incorporate what she learned in the workshop into discussions in her biology classes about humans' impact.

“By exposing them to the importance of the environmental aspect, you’re opening up worlds to them that they might not even know existed and interests that they might not have,” she said. “As a teacher, your job is to expose kids to as much outside life as you can, so they can have real-life experience, which gives them ownership of whatever curriculum you’re teaching.”

The “Living with the Bay” workshop, open to all educators on Long Island, had spots for 25 to 30 teachers when word went out in April on emails at schools and through social media. Participants were chosen on a first-come basis, with 15 ultimately attending the program. Centrella-Vitale said she anticipates next year’s workshop will be in July as well.

Raymond Williams, who will begin his teaching career this fall at Sayville High School as a living environment and chemistry teacher, saw the workshop as a constructive, professional way to learn about Long Island’s ecology and be able to transfer the information to his pupils. He said he would like to take students to Hempstead Lake State Park.

“The classroom environment can become boring,” Williams said as he hiked near Hempstead Lake under a hot sun. “It’s the same thing every day, the same four walls. They’re not going to be living their life in those four walls — they’re going to be living life out here, so it’s better to get them exposed to life out here and teach them more practical things that they can learn.”