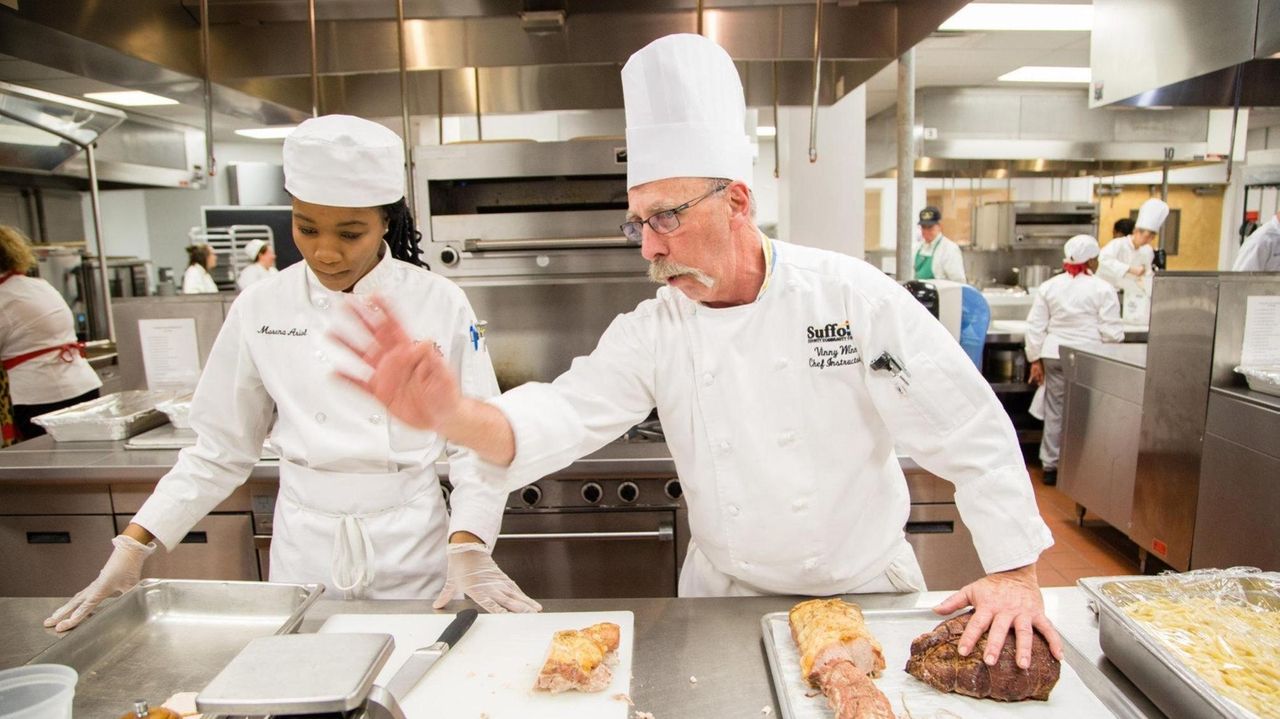 All this, and more, went into some 200 Thanksgiving dinners that students and faculty in Suffolk County Community College’s Culinary Arts and Hospitality program prepared Wednesday for local residents in need.

“I come from a single-parent home, so I know what it is to struggle during the holidays,” said first-year culinary student and volunteer Kelly Smith, 38 of Westhampton. “I know a lot of people gave when my mom couldn’t, so this is me giving back.”

It also was a learning experience, said Smith, who helped carve the approximately 16 turkeys. The instructor taught them to slice the turkey differently than you would at home to “stretch the meat so that he made sure that everybody gets a piece,” she said. “It was a lot of turkey!”

The dinners were delivered to Greenport-based Community Action Southold Town’s food pantry and Clinton Memorial A.M.E. Zion Church. Community members had the option of eating a dinner hosted by the church Wednesday, or taking the meal home, organizers said.

“This is an event we all look forward to,” said Laureen Gauthier, director of the culinary program. “Our college’s decadelong celebration of cooking for Thanksgiving connects us to our neighbors in the communities around our campus.”

This is the 10th year of the program, and its second year working with Community Action Southold Town, a not-for-profit that helps low-income residents and serves as a safety net for families in the town, according to the college.

“Everybody is extremely grateful,” Community Action Southold Town executive director Cathy Demeroto said. Most of their clients on the North Fork are seasonal workers whose hours are typically reduced this time of year, she said. “They’re out of work, so to have the opportunity to have a home-cooked meal that the culinary students make, they’re just grateful.”

Some of the food was donated by local companies, including pies and dinner rolls, and the ingredients were purchased by Community Action Southold Town using donations, Demeroto said.

The school has been prepping for the event since Monday, said Chef Vinny Winn, a culinary instructor at SCCC. There’s also a lot of instruction on the day of, with some students from nursing, baking and dietetic also volunteering, Winn said.

Tess Wonderling, 34, of Riverhead, a first-year culinary student, signed up to help others, and also gets the extra credit. But the event took on a new meaning when she heard the meals were going to Community Action Southold Town.

When Wonderling, a single mother, moved to the Island with her son three years ago, she took advantage of the nonprofit’s services.

“They helped me immensely with clothing and food, and helping to fill out forms to get everything taken care of for my son and I,” she said. “They were great and they treated us like we were human.”

Wonderling said she is back on her feet, going for her associate degree in culinary arts — and on Wednesday was given the opportunity to do something for Community Action Southold Town.

“I’ve always wanted to give back to them somehow for everything that they did for us when we got here,” she said. “It feels good to give back.”