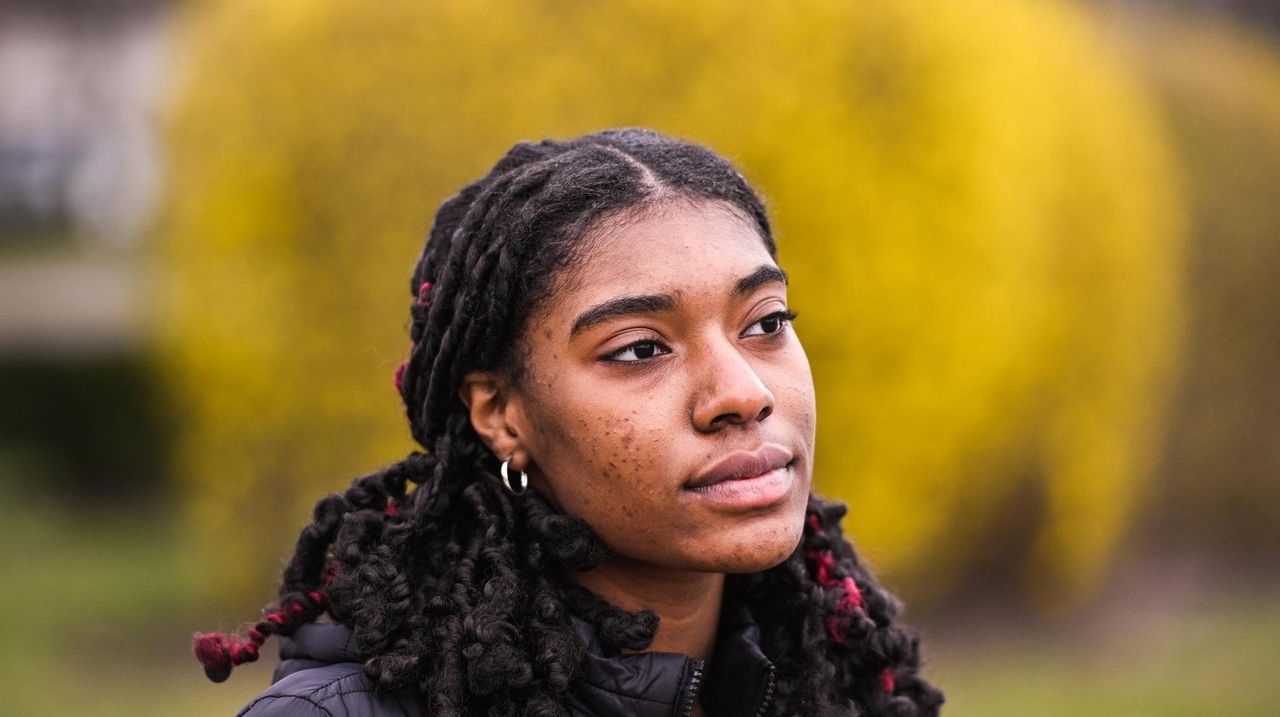 A Central Islip senior, Twyla Joseph, landed on the cover of Time magazine, reflecting the story of young people during the pandemic — her struggles with virtual schooling, her anxiety over college and career choices. Credit: Newsday / Steve Pfost

In so many ways, Twyla Joseph reflects the story of young people during the pandemic — her struggles with virtual schooling, her anxiety over college and career choices.

Time magazine has placed the Central Islip High School senior on the cover of its upcoming issue, which focuses on the "lost year" experienced by so many students.

The sprawling story begins and ends with Twyla wrestling with the challenges of the COVID-19 pandemic. It chronicles how the 17-year-old from a family with limited means lost her job early on and often felt alone in making decisions on what college to attend and what career to pursue.

"I lost a year of education," said Twyla, of Islip Terrace. She felt, she said, "frozen in time."

Twyla's comments are those of a thoughtful and mature young person, but her reaction to being on the cover of one of the world's most influential news magazines was that of a prototypical over-the-moon teenager.

Time magazine found her through her volunteer work with the group Make the Road Action, which advocates for justice in education, immigration and the criminal justice system.

Twyla said she hopes the Time article, available online and soon on newsstands, makes a difference, crystallizing the harmful effects of the pandemic on young people.

"In my community, Central Islip, we're kind of lower income and our schools are underfunded, so I wanted this story to go out there," she said. "I'm not the only person with this story. You come from a family that doesn't have unlimited resources. … It's harder, and it's not just harder for me, it's harder for my community."

She said she worries that the "lost year" will become a lost generation of young people. The isolation and endless hours watching online classes, she said, "gave us a lack of motivation. … We got used to being lazy."

At one point last year, Twyla said, she considered not going to college, taking a gap year to rebuild her finances and let the pandemic settle down. Her mother, who was raised in the Caribbean island nation of St. Lucia and didn't attend school in the United States, could not offer much help. Twyla said her guidance counselor was mostly available through email and seemed always overwhelmed.

She regained her job at Panera Bread in Bay Shore in August and decided afterward she would attend college. But the pandemic has forced her to recalibrate her college choices, from going away to a historically Black college to a place closer to home.

Her career choice also has changed. Her dream of becoming an occupational therapist was scrapped due to the educational costs, and instead she's applied to be a psychology major, with hopes of being a social worker.

"The important thing is I want to help people," Twyla said.

This is not Twyla's first moment in the limelight. She was among several young people who spoke with senators Bernie Sanders and Elizabeth Warren in 2019 about issues important to their generation.

"When Twyla shares her story, she doesn't only connect the dots for everyone. She takes apart the structural issues in the world, and then connects them to the very personal part of her identity and her community," said Kendra Cornejo Munoz, lead organizer with the youth power project of Make the Road Action.

Twyla has emerged as a leader among the organization's young people, said Cornejo Munoz.

"Not every youth is comfortable sharing how difficult it has been in this pandemic. Her vulnerability has touched the hearts of a lot of people," Cornejo Munoz said.

Twyla has received letters of acceptance from four schools but is holding off her choice until she sees how much financial aide she'll receive.

Her appearance on the Time cover lifted her spirits, she said, after a year in the COVID-19 doldrums.

She offered a behind-the-scenes view of the cover shot, which looks as through she's sitting on a desk in school flanked by some lockers and holding a laptop and her college-level statistics book. In truth, Twyla said, the picture was taken in the driveway of her home. The Time photographer brought a blue screen for background and placed a desk and some lockers there, she said.

Her mother beams with pride over her daughter's achievement.

"I'm very proud, very, very proud," said Catherine Phillips. "She has a lot of potential. She'll be able to do whatever she sets her mind to do."

That approval, Twyla said, means so much to her.

"Throughout the pandemic, I kept asking myself, 'What can I do to make my family proud?'" she said. "Now I feel I accomplished something, so I feel better about everything."