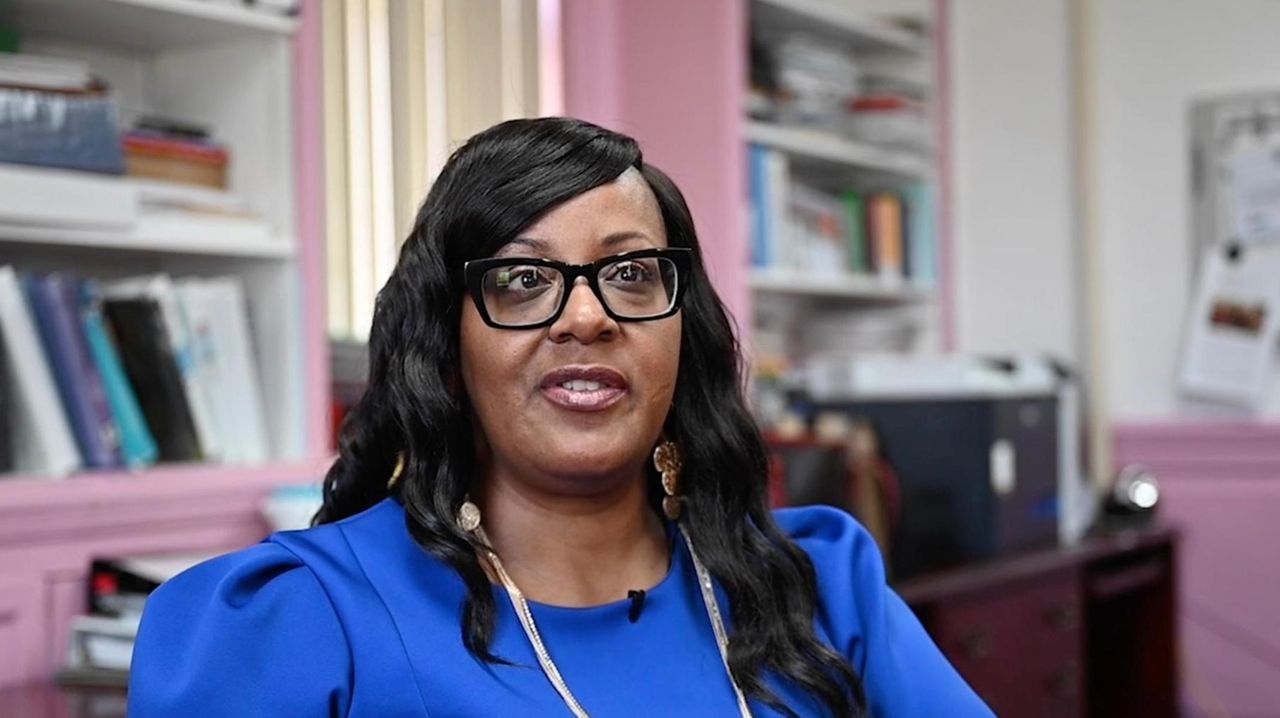 Long Island school districts are using federal and state financial aid totaling $1.27 billion to expand school programs. Regina Armstrong, acting superintendent of the Hempstead district, spoke to Newsday on Friday about how her district plans to use the funding. Credit: Danielle Silverman

Many Long Island school districts holding budget votes on Tuesday are offering residents modest tax breaks, while at the same time calling for expanded spending on staffing and student services.

Both the tax reductions and the higher spending stem from the same source, finance experts said. Growth this year in federal and state financial assistance is allowing many districts to schedule improvements ranging from increased tutoring to upgrades in school ventilation systems without raising property taxes to pay the costs.

School polls generally open at 6 a.m. or 7 a.m. and close at 9 p.m. or 10 p.m. in Nassau County and western Suffolk, though there are exceptions. In the East End, many polls close at 8 p.m.

Across the Nassau-Suffolk region, proposed school budgets for 124 districts total a combined $13.75 billion. Those spending plans cover the 2021-22 fiscal year, which begins July 1.

Five districts will seek to override state cap restrictions on their tax levies, which are total revenues raised through local property taxes. Those districts are Bridgehampton, Islip, Sagaponack, Three Village and Wantagh. Under state law, overrides must be approved by at least 60% of local voters.

One beneficiary of added funding assistance is the William Floyd district in southern Brookhaven Town, which is receiving a $14 million, 15.6% hike in "foundation" aid, the state's largest school funding program. As a result, William Floyd is among districts freezing taxes next year.

"I mean, we went up $14 million in one year!" said Kevin Coster, superintendent of the sprawling system that enrolls about 8,900 students. "If there's any year when we could go out with a tax freeze, this was the year. Our community deserves the tax relief."

At the same time that William Floyd holds the line on taxes, the district is planning improvements for schools serving the communities of Mastic Beach, Moriches and Shirley. Proposed upgrades include building renovations and repairs, as well as expansion of summer enrichment courses funded with federal stimulus money.

Hempstead schools also are freezing taxes, while restoring about 55 jobs for teachers and other staff that were eliminated in the recent past. Central Islip, meanwhile, is cutting taxes by six-tenths of 1%, while expanding summer programs at both elementary and secondary levels and providing additional Chromebook electronic tablets to students.

"We understand as a school district that our homeowners can't afford a tax increase, especially in this climate," said Regina Armstrong, Hempstead's acting superintendent. "We realize that most residents have taken a financial hit, even in terms of food purchases."

Sharon Dungee, superintendent of Central Islip schools, said her administration was "proud to be presenting a budget that is responsive to the needs of our students and community, while reducing school property taxes."

Across the Nassau-Suffolk region, a total of six districts, including Elmont, Freeport and Oysterponds, are calling for small tax cuts. Tax freezes have been proposed in another 14 systems, including Lawrence, Mineola, Brentwood and Rocky Point.

Meanwhile, the great majority of districts are raising taxes, but at a lower rate than was forecast several months ago, before the unprecedented scope of new federal and state assistance payments became known.

Four districts in the region held votes early on May 11 to avoid conflict with a Jewish holiday, and all their budgets passed. The remaining 120 districts vote Tuesday.

Islandwide, projected taxes for next year are going up an average 1.38%, the lowest rate hike in five years. Average proposed spending is up 2.91%, the biggest increase in eight years.

Spending proposals submitted to voters do not include federal stimulus money, which is handled separately and spent at the discretion of local school officials following national guidelines.

Regional school analysts observed that the neediest districts are benefiting most from recent infusions of federal and state money, which total $1.27 billion. For this reason, analysts contended that those districts are finding it easier to reduce taxes than more affluent systems, which received smaller shares of aid.

"Simply put, there is not a one-size-fits-all scenario," said Lorraine Deller, executive director of the Nassau-Suffolk School Boards Association.

LI school elections: full resultsSchool district residents went to the polls Tuesday to vote on budgets and members of their local boards for the coming school year. Here are the latest results from LI's 124 districts.