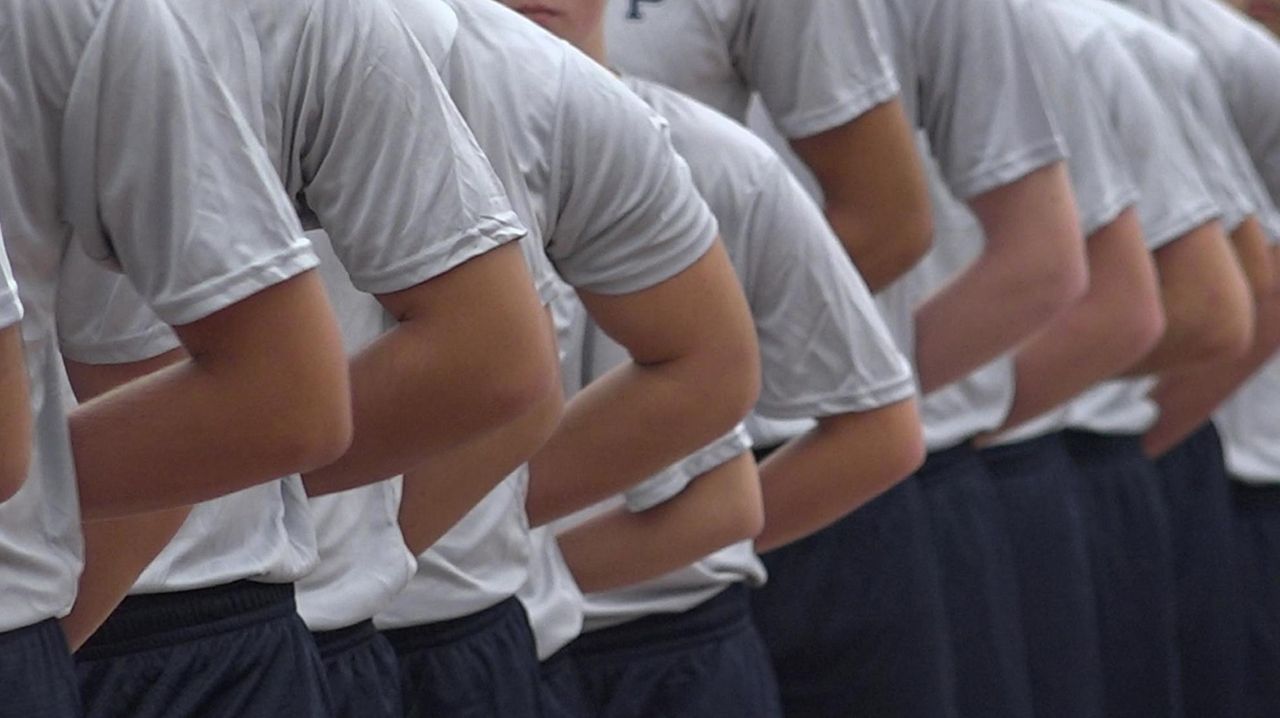 Capt. Ryan Sullivan, an attorney with the U.S. Military Academy, spoke to Newsday on Feb. 10, 2017, about the military's Special Victims Counsel program, aimed to improve the way in which victims of sexual assault are treated in the armed services and at federal service academies.  The program's lawyers act as independent counsel and can speak on victims' behalf and direct them to mental health counseling services. Credit: Craig Ruttle / Chuck Fadely

Capt. Ryan Sullivan, an attorney with the U.S. Military Academy, stands ready to represent students who are victims of sexual assault during their first experiences with the military’s justice system.

He sits with West Point cadets in interrogations, parries questions from investigators and defense counsel, and in some cases pushes prosecutors to dig deeper. “We think you missed some things” is a common refrain, Sullivan says.

The military’s Special Victims Counsel program, which is about four years old, has aimed to improve the way in which victims are treated in the armed services and at federal service academies, where coercion, bullying and retaliation, along with sexual assault and sexual harassment, are documented problems. The program’s lawyers, empowered by attorney-client privilege, act as independent counsel and can speak on victims’ behalf and direct them to mental health counseling services.

That reform did not come to the U.S. Merchant Marine Academy in Kings Point until a consultant’s report this year highlighted its absence. As the academy grapples with how to better handle cases of sexual misconduct, implementing a program that expands the rights of victims has been among the key suggestions for improving the campus climate.

After Newsday’s inquiries about reforms to the sexual assault response program, academy officials said last week that the school is in the process of hiring a Special Victims Counsel.

The 74-year-old school, which comes under the U.S. Department of Transportation, does not conform to the Uniform Code of Military Justice, the rules and regulations that define the justice systems at the academies for the Army, Navy, Air Force and Coast Guard. That has put USMMA in a unique position, potentially hampering efforts to improve the reporting and judicial process for assault victims on the Kings Point campus, lawmakers and advocates said.

USMMA, with its accreditation placed on warning by the Middle States Commission on Higher Education in June 2016, is under increased scrutiny to address its efforts to prevent sexual assault and sexual harassment, as well as to correct weaknesses in governance and leadership. The commission’s decision on whether the academy’s leaders have done enough to return to good standing is expected later this week.

Changing the Merchant Marine student culture from one that blames the victim to one that advocates for the victim was among the recommendations in an independent study released in January by Logistics Management Institute of Virginia. The 138-page audit, commissioned by the Transportation Department, described victims’ lack of trust in the system and noted that the absence of independent legal counsel for victims worked to “hinder the effectiveness of the Academy’s response to sexual assault.”

Among other reforms the academy should undertake, the report said, were creating a policy that prohibits retaliation and ostracism; establishing a 24-hour helpline for confidential reporting of sexual assault, both on campus and during the intensive Sea Year training program, modeled on the helpline used by the other service academies; and setting up a forum for victims to exchange information with leadership and other victims.

The academy’s leadership, in response, said it had implemented an action plan based on the LMI report’s recommendations. An Academy Sexual Assault Review Board meets at least monthly and includes senior leadership who are overseeing the completion of the plan.

During the last year, USMMA has expanded the number of personnel in the sexual assault response office; contracted with an outside vendor to provide online prevention training; tripled the length of the training at freshman orientation, known as indoctrination; developed a reintegration training program for students upon their return from the Sea Year; and partnered with The Safe Center, a nonprofit victims’ services agency in Bethpage, for training support and 24/7 hotline responsibilities.

Beginning Thursday, educators from The Safe Center will conduct nine days of training focusing on bystander intervention to prevent sexual assault as part of freshman orientation.

“These trainings are essential to help people identify situations when a classmate might be in danger and talk about how to intervene to stop it. We are talking very clearly about consent and why it is always necessary,” said Anthony Zenkus, director of education at The Safe Center. “At this point, the Merchant Marine Academy is going above and beyond what some of the other schools are doing in terms of prevention training.”

The school also has updated and expanded the academy’s policy against sexual harassment, assault and retaliation, and joined the National Collegiate Athletic Association’s “It’s On Us” campaign to fight sexual assault on college campuses.

These reforms are aimed at increasing trust in the system so USMMA students are encouraged to file formal reports if they are victims or witnesses of sexual misconduct. In recent years, the number of documented reports was consistently low compared with the percentage of students surveyed anonymously.

That increase “demonstrates that the recently enhanced sexual assault and harassment training, a more robust Sexual Assault Prevention and Response Office, along with numerous initiatives designed to promote a campus culture of zero tolerance, are not only encouraging the reporting of incidents, but also empowering bystander intervention and helping midshipmen take personal responsibility for the safety and well-being of fellow students, faculty and staff,” Strong said.

USMMA, with an enrollment of about 900 students, trains men and women for careers in the commercial shipping industry and to serve national defense needs on U.S.-flagged ships. It is the only federal service academy operated by the Transportation Department through its agency, the Maritime Administration, or MARAD. The academies for the Army, Navy and Air Force are operated by the Department of Defense, while the Homeland Security Department operates the U.S. Coast Guard Academy.

A Newsday review published in January, based on public documents and interviews with midshipmen, showed that despite attempts at reform, sexual assaults, harassment and sexism have been documented and have persisted at the academy for almost a decade, both on campus and during the Sea Year program.

Adding to the school’s woes is the June 8 suspension of the men’s soccer program amid an investigation by the Transportation Department’s Office of Inspector General into allegations of sexual misconduct by team members. The academy is withholding the degrees and certificates of several soccer players who are under investigation, and seven seniors have challenged their “deferred graduate” status in federal court. The probe centers on an alleged incident that occurred on a team bus in September, according to court papers.

Richard Pokrass, a spokesman for the Middle States Commission on Higher Education, said the “commission is aware of the recent developments involving the student athletes,” but “it is unknown” whether those developments would be part of the commission’s discussions about USMMA and its accreditation.

USMMA’s students, called midshipmen, are civilians and don’t qualify for the same protections — such as representation by Special Victims Counsel — as those at the four military academies. They also are denied the same basic protections and support required at civilian colleges and universities that receive federal student aid, because USMMA does not fall under the rules and regulations of Title IX, the federal law banning sex discrimination on the basis of gender that applies to most institutions of higher education.

Sen. Kirsten Gillibrand (D-N.Y.) has described the school as being in a “no man’s land” with regard to oversight on sexual misconduct.

The senator, who has concentrated on the issue of sexual assault reforms in the military, visited Kings Point just before the presidential election last fall, announcing a plan to propose legislation that would bring USMMA under Title IX. She has not provided an update on the legislation.

A key difference for USMMA students: When a victim report triggers an investigation at the Kings Point school, the federal agency leading the probe often is the Inspector General for the Transportation Department. At the other service academies, a military criminal investigation would commence.

Many of the changes at the academies that are under Defense Department jurisdiction have occurred because of reforms recently enacted in the Armed Forces.

“They’re [USMMA] definitely off the radar of most members of Congress and really haven’t been part of the whole sexual assault conversation” affecting the rest of the military, former Air Force chief prosecutor Col. (ret.) Don Christensen said. He is president of Protect Our Defenders, a Washington-based organization that works to end sexual assault in the military and fights misogyny, sexual harassment and retribution toward victims.

“For women, it demonstrates a need for them to have someone in their corner fighting for them against an abusive environment, and an abusive command,” Christensen said. “And the SVC is a great first step to give them a voice to challenge that culture.”

Capt. Nick Tesmer, a Special Victims Counsel with the Air Force, described how the duty to advocate for students takes top priority. The Air Force, which in January 2013 was the first military branch to offer the Special Victims Counsel program, recently expanded the program to allow SVCs to represent victims at a hearing for an officer’s potential discharge from the military.

Lt. Cmdr. Elizabeth Hutton, senior Special Victims Counsel with the U.S. Coast Guard, said of the students she works with: “They’ve probably never been in trouble, never been introduced to law enforcement in their entire lives. A lot of it is helping them to calm their nerves and helping them to understand what’s about to happen.”

Even with reforms and the creation of Special Victims Counsel programs, the military branches have had their share of incidents of sexual misconduct.

Earlier this year, the Marine Corps launched an investigation into reports that service members exchanged nude photos of their female colleagues via social media. In 2013, the men’s rugby team at West Point was temporarily disbanded after reports that members sent lewd emails about female cadets.

Christensen said recent scandals have “shown that leadership across all the academies has not gotten the message out that this kind of conduct is not tolerated.”