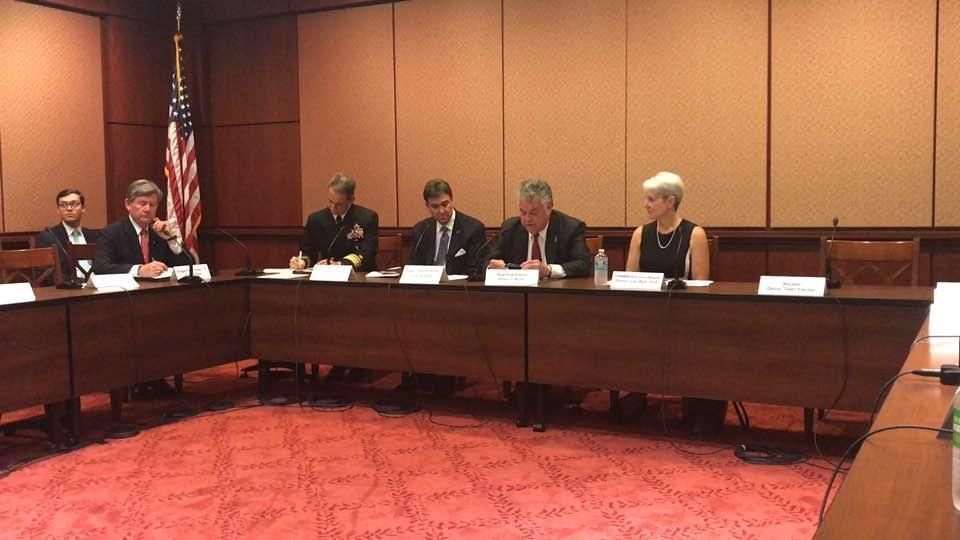 The USMMA Board of Visitors met in Washington, D.C., on Wednesday, July 12, 2017. The congressional oversight panel discussed a number of issues at the 74-year-old federal service academy, including prevention of sexual assault and its academic accreditation. (Credit: Newsday / Scott Eidler)

WASHINGTON — The congressional panel that oversees the U.S. Merchant Marine Academy on Wednesday praised the school’s work to upgrade prevention of sexual assaults after a year of tumult at the 74-year-old federal service academy.

“The academy has had a challenging year and has made strong progress on many fronts,” Sharon van Wyk, a member of the panel and chair of the USMMA Advisory Board, said at the meeting held in the Capitol Visitors Center. “More has to be done.”

The school, which comes under the jurisdiction of the U.S. Department of Transportation, has adopted new procedures for preventing sexual assault and harassment both on the campus in Kings Point and during its year-at-sea training program, which was temporarily suspended last year amid reports of sexual misconduct, bullying and coercion. It also has sought to regain good standing from its nongovernmental accreditor, which placed the school on academic warning in June 2016.

The 17-member panel issued a report that recommended:

“For over a decade, victims, witnesses, and survey data indicated that there had been occurrences of sexual harassment, assault, hazing, bullying, coercion and retaliation toward midshipmen,” said van Wyk, who reported on the issues at last July’s Board of Visitors meeting.

“There are early signs that these actions are making a difference,” she said. “Although it is still very difficult and unsettling to hear that there are more victims coming forward, this is a positive sign. It’s consistent with positive change . . . victims are coming forward with less fear of reprisal.”

Academy officials recently told Newsday that the school received a record nine reports of sexual assault in the 2016-17 school year — up from four in the previous year — citing it as a sign that the reforms are working.

Rep. Peter King (R-Seaford), the board’s chairman, said 2016 “was a very difficult year for the academy and, more importantly, for the midshipmen. I firmly believe that even one single incident of that type is one too many, and that serious measures must be put in place and precautions taken to do all that’s possible to safeguard midshipmen against all forms of sexual assault and sexual harassment.”

Rear Adm. James A. Helis, the academy’s superintendent, filled in the panel about recent hires and plans for new officials to work in the school’s Sexual Assault Prevention and Response office, including a victims’ advocate educator. A key takeaway of a Transportation Department consultant’s report, issued in January, was that victims did not feel supported on campus, he said.

“There’s more concern about somebody who has been accused of committing a sexual assault or sexual harassment than somebody who is a victim thereof,” Helis said. “That is a shift that we have to get in mindset. That we care about all midshipmen, but we have to care about the victims.”

The Middle States Commission on Higher Education, the Philadelphia-based accrediting agency, placed the academy on warning for failure to comply with five of 14 academic benchmarks. Last month, the commission said USMMA had made improvements in all but one of those five — institutional planning and allocation of resources — and said the warning status would continue. The school remains accredited while on warning.

Helis told the panel, “We are confident that we will meet the fifth standard.”

The Board of Visitors last met in November on the academy’s Kings Point campus, five months after then-U.S. Transportation Secretary Anthony Foxx had suspended the Sea Year program on both federal and commercial ships, prompting heated criticism from alumni and many parents of students. Training on federal ships was resumed, but not on commercial vessels.

The consultant commissioned by the Transportation Department reported in January that there was “a lack of trust and a culture of fear” on campus and recommended key changes, including a new credentialing process for commercial shipping companies. Training on commercial ships resumed in March.

Board member Sen. Roger Wicker (R-Miss.) took issue with the Sea Year’s suspension, saying it was “overkill and aimed at the wrong problem.”

Wicker, who attended and spoke at the academy’s June 17 commencement in Kings Point along with Transportation Secretary Elaine Chao, said, “We’ve got a treasure here at Kings Point that may need to be improved, but boy it sure needs to be preserved and sustained.”

He said, “Clearly, whatever cultural problem there is, it’s there on grounds more than it is during the Sea Year.”

No mention was made of an ongoing probe conducted by the Transportation Department’s Office of Inspector General into allegations of sexual misconduct by members of the academy’s men’s soccer team.

The existence of that investigation came to light publicly last month, when Helis suspended the NCAA Division III soccer program and placed seven players who were seniors on “deferred graduate status.” The students are suing the school in federal court for their right to graduate.

Rep. Thomas Suozzi (D-Glen Cove), attending his first meeting as a board member, said he hopes the school “regains its premiere status.”

Suozzi noted a recent bill he introduced along with Sen. Kirsten Gillibrand (D-N.Y.) that seeks to subject the academy to the rules and regulations of Title IX of the Education Amendments of 1972. That federal law bans gender discrimination, including sexual violence, and applies to schools that receive federal funding.