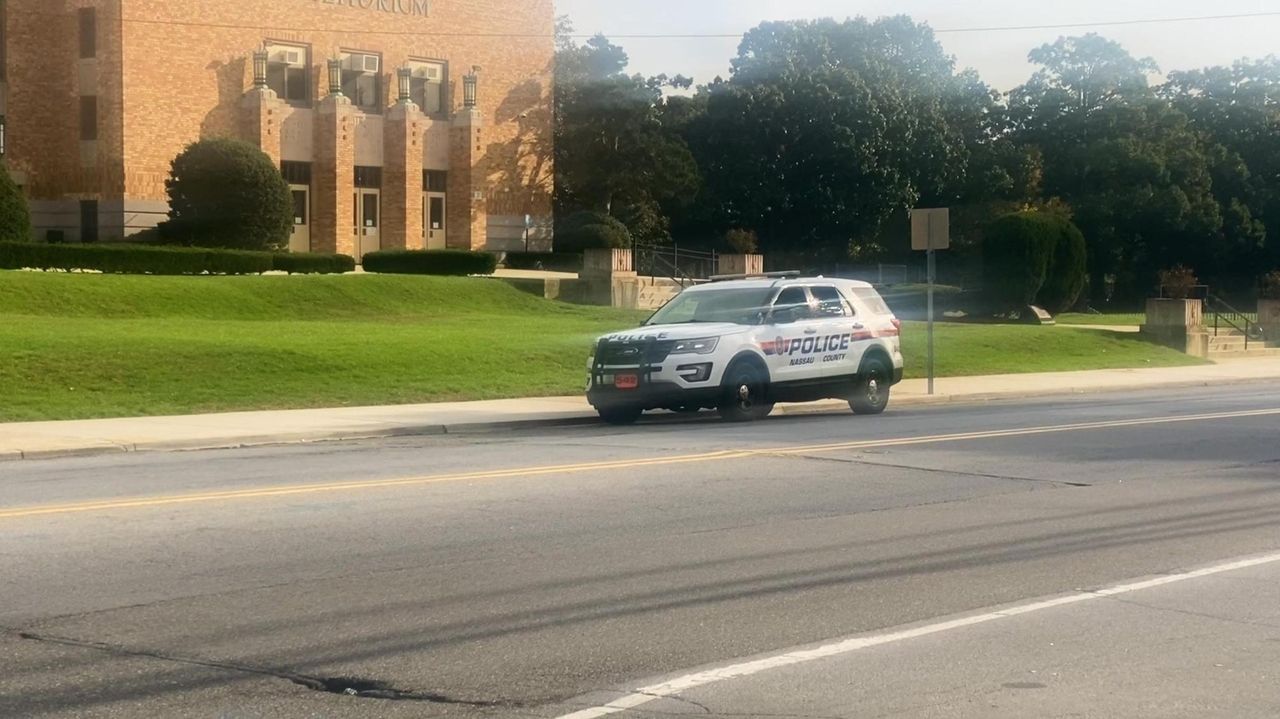 Schools in the Valley Stream Central High School District were under lockout protocol Monday due to multiple threats. The superintendent said the day was "uneventful" at schools, but out of an "abundance of caution" the lockout protocol will be in place again for the beginning of school Tuesday. Newsday's Cecilia Dowd reports. Credit: Howard Schnapp

Nassau police will be on Valley Stream Central High School District's four campuses Tuesday, with only students and staff also allowed inside for a second day after anonymous online threats, officials said.

One of the weekend threats was posted on social media and directed at "central high schools" around the country, prompting the cancellation of Saturday's homecoming events for Valley Stream Central High School, district officials said. In addition, weekend social media threats specifically named North High School and Memorial Junior High School, according to the district. No threats were reported against the district's South High School.

The threats spurred an enhanced police presence at all four school buildings on Monday, as well as the institution of "lock-out" protocols, limiting entrance to students and staff.

Although Monday "remained an uneventful day at our schools," with "no additional threats," said acting district Superintendent Wayne R. Loper in a letter to the schools' community, "out of an abundance of caution" heightened security will continue.

"As an additional security measure, we will again have Nassau County Police presence at our schools and enhanced security measures will remain in place," Loper said. "We understand and appreciate the impact the events of this weekend have had on our community. Please be assured we are taking every measure to ensure the safety and security of your children."

Kevin Galvez, 17, a North High School senior, said many students and some teachers were absent on Monday.

Feeling unsafe, he said he got permission to leave after two classes attended by just a handful of pupils instead of the usual 25 to 30.

Describing how it felt to be at school on Monday, he said: "It was crazy, it was very overwhelming, it was worrying to us."

He added: "They were being cautious with everybody."

A district spokesperson said there were increased student absences on Monday. Attendance numbers for the district were not immediately available.

Social media threats allegedly made against a high school in the Midwest led to the safety measures at Valley Stream Central High School.

The common name of the high school, however, prompted copycat cases and various lockdowns from New York to Kansas to Louisiana to Texas, according to the Valley Stream Central High School District and media reports.

Nassau and Suffolk police as well as a NYPD spokesperson said they were not aware of any other such threats.

Nassau Police Commissioner Patrick Ryder said in a statement that community policing officers and detectives from the department's Homeland Security division were at the Valley Stream schools.

"I would like to assure all Nassau County residents, school personnel and students that all threats received by the police department are taken seriously until they are deemed unfounded or noncredible," Ryder said. "Numerous investigative resources are expended during these investigations and false threats will never be tolerated."

District: Threat leads to canceled homecoming events at high schoolAfter consulting with police, the Valley Stream Central High School district said, it will keep North High and Memorial Junior High open Monday. But it will operate all of its schools under lockout protocols.