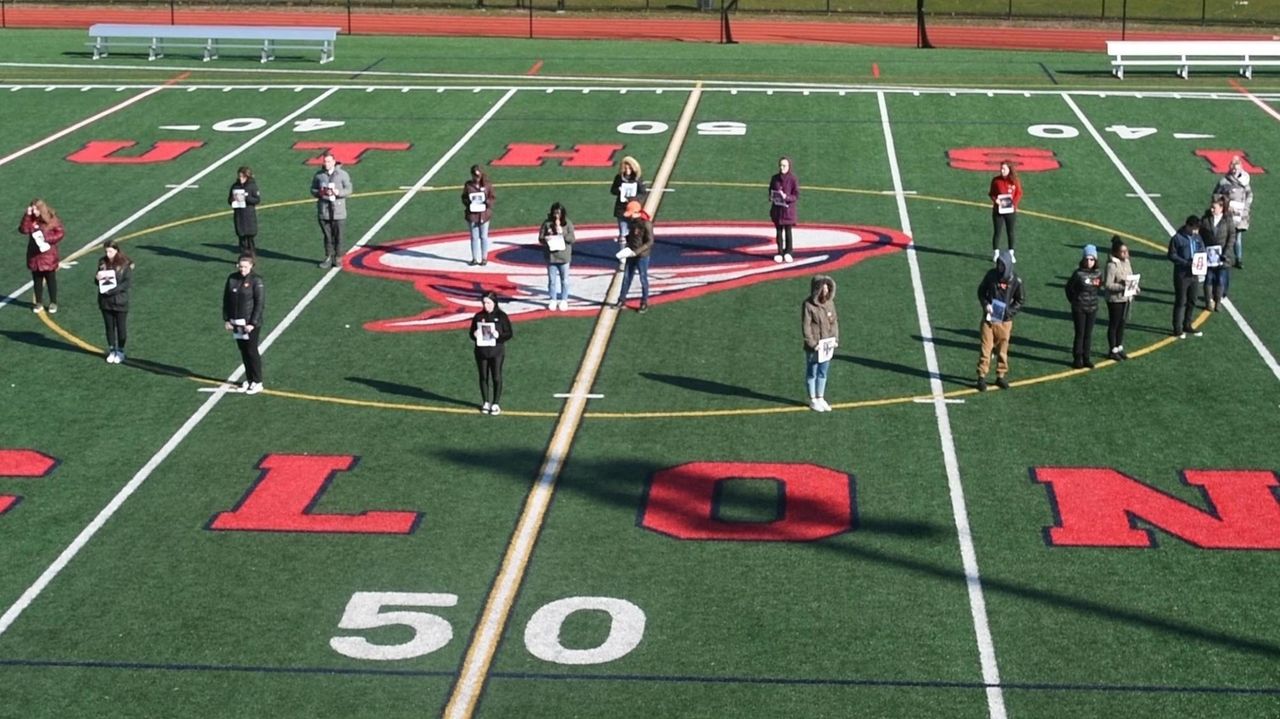 Students in districts across Long Island walked out of their school buildings or participated in other demonstrations on Wednesday, joining a mass national protest to remember the victims of last month's shooting in Parkland, Florida, and make calls for greater gun safety. Credit: Newsday Staff

Students in districts across Long Island walked out of school buildings or participated in other demonstrations Wednesday, joining a nationwide protest to remember the victims of last month’s shooting massacre in Florida, and to call for greater gun safety.

Demonstrations spanned the Island, from the Lawrence school district in western Nassau County to the Bridgehampton district on the East End. A mix of private and public schools participated. The local events, most organized by students on social media, were part of a national mass movement to memorialize the 17 people shot dead at Marjory Stoneman Douglas High School in Parkland, Florida.

“It was an amazing experience at the high school,” said Baldwin schools Superintendent Shari Camhi. “In complete silence, students walked into the gym and observed 17 minutes of silence. They read the names of each victim at the top of each minute.”

Wednesday’s national walkout — which lasted 17 minutes — was organized in the days after the deadly rampage carried out by former Stoneman Douglas student Nikolas Cruz, 19, who police said used a semiautomatic AR-15 rifle. Cruz has been indicted on 17 counts of premeditated murder and 17 counts of attempted murder. He is being held without bond and could face the death penalty.

On Long Island, many districts organized school-sanctioned tributes or walkouts Wednesday that served as a memorial to the 17 people killed. Some districts had warned students that they could face disciplinary action for walking out of class, and parents in at least three — Connetquot, Lindenhurst and Rocky Point — said their children had been disciplined.

Julie Ginsberg, 17, a senior at Connetquot High School, received a three-day in-school suspension for joining about a dozen other students, a teacher and another staffer outside the school at the flagpole, where they all joined hands.

“My school wanted us to only stand in a hallway and that doesn’t show anything, and 17 seconds is very disrespectful for the lives that were taken,” she said, of the school’s shortened moment of silence.

High school psychology teacher Barbara Martorelli, who joined the students outside and said she too was facing disciplinary measures, said the students were respectful and called a three-day suspension “ridiculous.”

“They are taking these kids out of three days of education for a 17-minute walkout,” she said.

Lynda G. Adams, superintendent of the Connetquot school district, declined to comment on the students’ discipline, but said: “Messaging was distributed to parents and students, and they were advised that any actions which violate the district’s code of conduct would be disciplined accordingly.”

Michelle Salz, parent of eighth-grader Isadora Luce, 14, who is president of the Rocky Point Middle School student council, said her daughter was given a one-day in-school suspension for walking out.

“It is disgraceful that our school district is choosing to penalize our activist students instead of embracing this event as a teaching opportunity,” Salz said.

Charity Astarita, whose two daughters walked out in the Rocky Point school district, said her elder daughter, a freshman at the high school, told her that she received two days of in-school suspension.

“They have the right to protest. These are our kids that are being killed and I think the kids have finally had enough and I am proud of them for speaking up,” Astarita said.

In Lindenhurst, parent Victoria Vine said her daughter, who is a senior at the high school, told her that she could face out-of-school suspension. She said that the punishment was too severe.

“They are overstepping their bounds,” Vine said.

Lindenhurst school officials, in a statement Wednesday, said they had downgraded the disciplinary action, but did not provide details. They did say that students had violated the code of conduct.

“While we respect the students’ desires to make their voices heard, our paramount priority is always student safety,” read a statement from schools Superintendent Daniel Giordano.

Massapequa school officials confirmed that fewer than two dozen students who participated in their own remembrance — instead of a school-planned activity — were also disciplined.

Still, the protests statewide were lauded by top education officials.

In a joint statement, state education department Commissioner MaryEllen Elia and Board of Regents Chancellor Betty Rosa said, “These young people, united in peaceful protest to demand action by our Congress on gun violence, are turning tragedy into a teachable moment for our federal lawmakers.”

Thousands of students participated in the day across the Island.

About 150 students defied the administration of the Three Village schools and marched out of Ward Melville High School holding signs and chanting against gun violence and for closer regulation of deadly weapons.

They went past security guards posted at the school entrance in East Setauket.

Three Village school officials had told parents that they could not support a walkout. School officials said later no disciplinary measures were taken against any students.

About 1,000 Lawrence High School students took to the track outside the school.

Hundreds of students at South Side High School in the Rockville Centre School District gathered on the football field while victims’ names and ages were called over the loudspeaker.

South Side student Kieran Travers, 17, said the Parkland shooting made him rethink his stance on gun control and spurred him to help organize the walkout at his school.

“I used to be very pro-second amendment, but because of the tragedy in Florida, seeing students our age being killed, it really made me change my political alignments,” Travers said.

There were no calls for gun control at the Bridgehampton 45-minute walkout, which was intended as a memorial to those who lost their lives or were wounded in the Parkland shooting.

About 250 seventh- through 12th-grade students from Bridgehampton School and the nearby Hayground School marched onto an icy tennis court as Sarah McLachlan’s “Angel” played over the loudspeakers.

About 50 students and as many staff gathered outside the Henry Viscardi School in Albertson, which serves students with physical disabilities.

The group remained silent in the cold for 17 minutes, one moment of silence for each victim. Student leaders lined up at the front of the crowd wearing signs with victims’ names.

Student Mahnoor Mujahid, 14, and her fellow organizers said they wanted to show solidarity with their peers across the country.

Student at protest: ‘We have a voice’Scenes from around Long Island as students participated in events honoring the victims of the Parkland shooting or protested gun violence. U.S. students stage walkouts to protest gun violenceWarning that their futures are being stolen from them, tens of thousands of young people ... What do you think about LI school walkouts?Students across Long Island — and the country — might walk out of their schools on March 14 to send a message in the wake of the recent school shooting in Florida. Do you think students should face disciplinary action if they walk out of their schools Wednesday without their district's support? LI students tell us why they wanted to walk outOn March 14, one month after the mass shooting at Marjory Stoneman Douglas High School, thousands of students in schools across the country will walk out of their classes. Several young activists on Long Island are planning to join the movement, walking out of their schools at 10 a.m. for 17 minutes to honor the 17 victims.