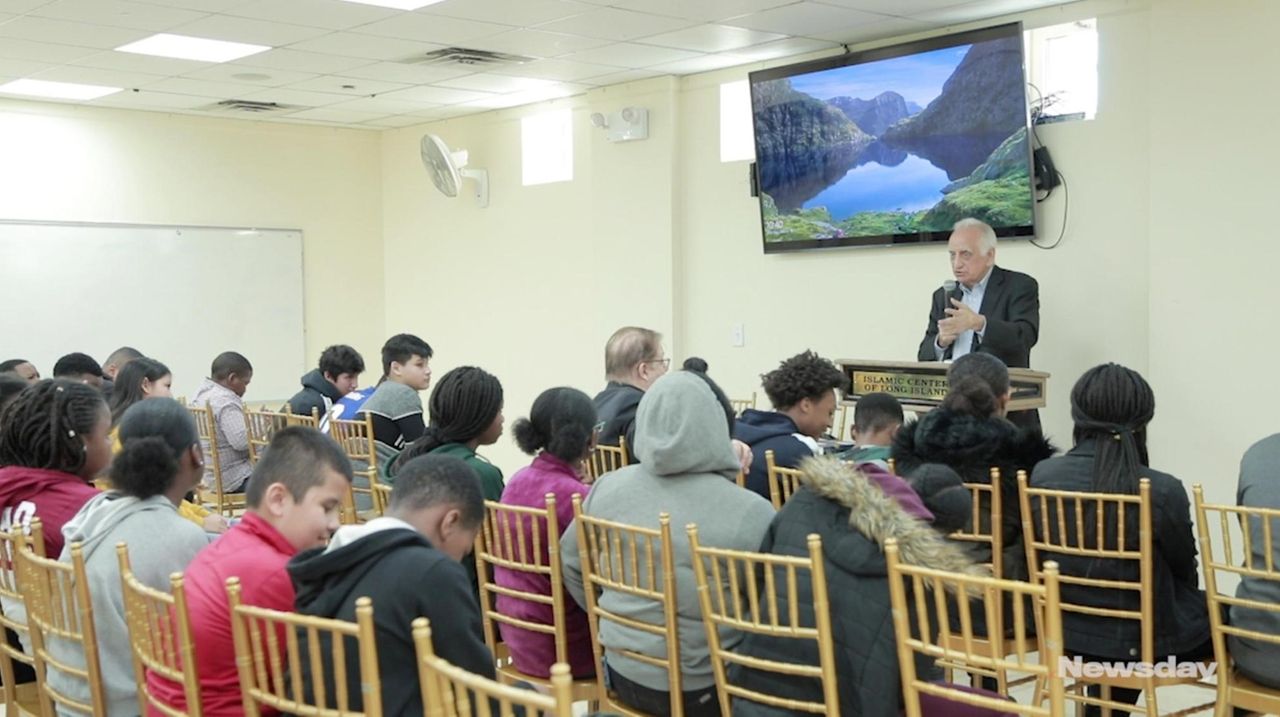 Westbury teacher Daniel Chavez, who has never been inside a mosque, spoke about the experience, which he considered eye-opening, and described what it taught him and his students as they visited The Islamic Center of Long Island on Monday.  Credit: Newsday / Yeong-Ung Yang

James Jean-Louis, an eighth-grader in Westbury, had never stepped foot in a mosque before.

On Monday, three days after the terrorist attacks in New Zealand, he found himself at the Islamic Center of Long Island as part of a school trip to expose young people to Islam and dispel misconceptions about the world’s second-largest religion.

A Nassau County police car was still stationed outside the mosque for security and most of the building’s doors were locked.

But for Jean-Louis and many of the three dozen students from Westbury Middle School, it was an eye-opening experience.

“It was very helpful because now I have a different point of view of Muslims,” said Jean-Louis, 14, a Roman Catholic who was born in Haiti. “When you talk about Muslims now I’m not going to think about those 9/11 guys. I am going to think of” the Muslims he met at the Westbury mosque.

The Islamic Center, the largest and one of the oldest mosques on Long Island, has long engaged in outreach to educate others about Islam.

But its members are stepping up their efforts as part of the mosque’s recently established Interfaith Institute.

“We realize that the best way to change minds is to reach out to the ones who are the most impressionable,“ said Naz Khan, who heads the mosque’s children’s religion class program. “We need to sow the seeds of love amongst our youth, not just Muslim youth.“

When Habeeb Ahmed, president of the mosque, asked how many of the students had ever visited a mosque before, not a single hand went up.

Lewis White, a social worker at the school, said some students were apprehensive before the visit. “There were a lot of negative views about what Islam was all about,” he said. The trip was intended to “help them to understand it is quite the opposite.”

The program included a tour of the mosque, along with talks by local Muslims including Khalid S. Lateef, the leader of a mosque in Wyandanch who regaled the students with tales of his Malcolm X-like journey from gangs and drug addiction in Brooklyn to his conversion to Islam.

A stop at the facility’s gymnasium caught the eyes of many students when they learned that a former NBA player who converted to Islam, Mahmoud Abdul-Rauf, previously known as Chris Jackson, visited there recently.

“He was Curry before Curry,” joked Eric Hamza Byas, a former president of the mosque, referring to Golden State Warriors star Steph Curry.

Jean-Louis said he was amazed to learn that Muslims pray five times a day, and that many Muslim women wear head coverings called hijabs to maintain modesty.

The students also saw a clear reminder of the New Zealand terrorist attacks in which a gunman killed 50 people  in two mosques during Friday prayers.

During the weekend, neighbors and other well-wishers visited the Westbury mosque to express solidarity and provide comfort.

They visited children in the religion classes, and brought them flowers and signs, Khan said.

Some of the signs, which were still on display in the lobby on Monday, said, “Hate has no home here” and “I love and support my Muslim friends.“

Khan said that when some of the Muslim children received the flowers and hugs from the well-wishers, they cried.

Faroque Khan, who organized the school program, said the mosque is still stunned.

“I was in a state of daze and shock over the weekend,“ he said.

One Westbury teacher, Daniel Chavez, said he was  impressed by his first visit to a mosque.

“I was also blown away being outside looking at the police cruiser standing guard,” he said, comparing it to the Roman Catholic Church where he worships and where he has never seen police.

Yet he saw similarities between the two faiths. “People come here to worship and to sort of feel connected to one another,” he said. Islam and Christianity are filled with people “who are just about love.”