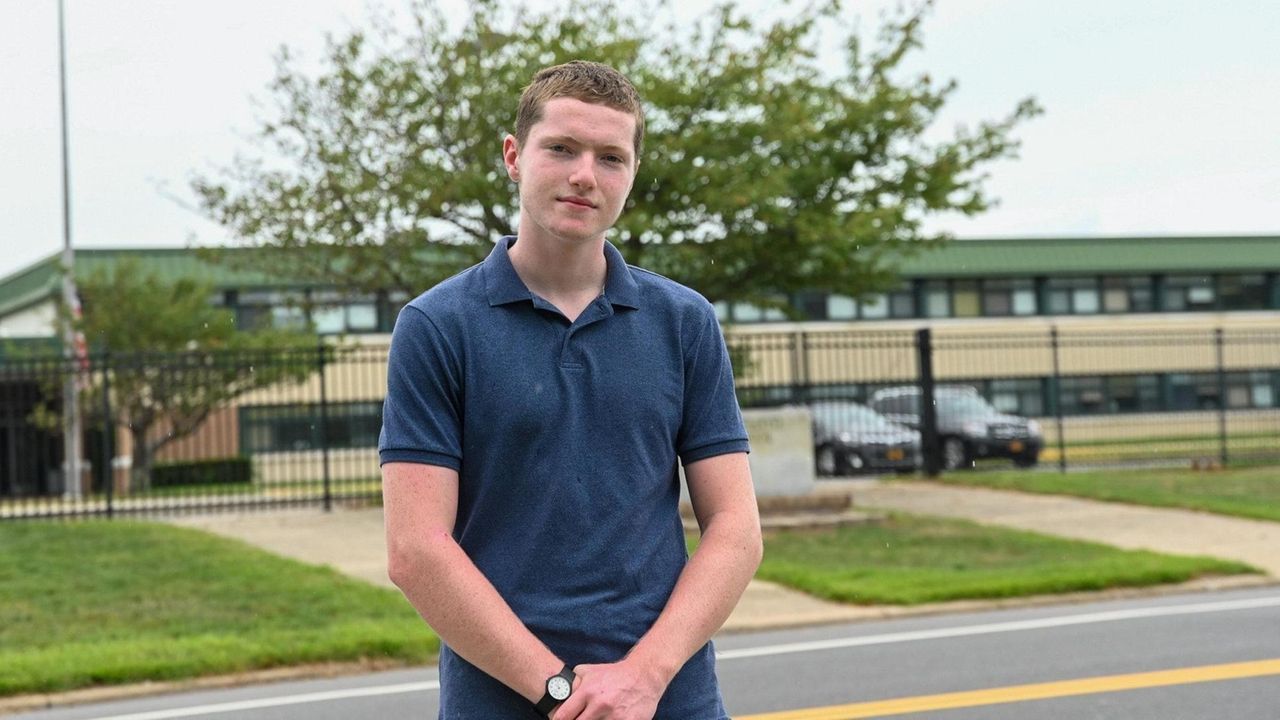 William Floyd High School senior Maverick Stow spoke to Newsday on Wednesday about why he thinks students should be attending school five days a week, rather than  abide by the district's hybrid attendance plan. Credit: James Carbone

For the second day in a row, William Floyd High School senior Maverick Stow arrived at school Wednesday morning wanting to attend school five days a week, rather than abide by the district's hybrid attendance plan. This time, school officials called the police.

No arrest was made, but the standoff Wednesday marked an escalation between Stow and school officials. On Tuesday, Stow, 17, had shown up and was given a five-day suspension. On Wednesday, school officials told him that if he does so again, he would face charges of criminal trespassing, he said.

Stow said he is trying to overturn the school's hybrid plan in which students attend school a few days a week and learn remotely the rest. He said he believes students should attend five days a week and that the school can find a way to do so safely.

"I think it's very simple. Five days a week is the best way to educate students," Stow said.

He said school officials could allow students who desire full remote learning to stay home, which would free up space for others. The students in school would wear masks and socially distance when possible, he said. In addition, Stow believes students involved with sports could sign a waiver releasing the school of any responsibility.

District officials said in a statement Wednesday that the hybrid schedule is needed for students to practice social distancing, and if Stow wanted to protest, he should take his advocacy to state elected officials.

Moreover, they said Stow was "insubordinate" to several school officials who asked him to leave the campus Wednesday, and at one point "squared up to a district official" and said he would have to be forcibly removed.

"His rights as a student do not surpass the rights of the other 8,799 students we have the privilege of educating," said the statement. "We take school safety seriously and since he has escalated this situation, the police are now involved."

Stow said he is scheduled to attend the school Thursdays and Fridays while learning remotely the other days. He said he believes remote learning is ineffective.

When Stow showed up Tuesday morning, he was able to enter the building after getting his temperature checked. When he was detected by his first-period teacher, he said he refused to leave and eventually returned to class and finished the school day. He said he learned about his suspension from his mother, who had received a phone call from the school.

When Stow showed up Wednesday morning, he said school officials blocked his entrance to the building and handed him a notice saying that if he did so again, he would be charged with trespassing. Stow said he was polite to the officials.

Suffolk police officials, in their own statement, said “police responded to William Floyd High School on September 9 after a student showed up to class when he was not scheduled to. … Police advised the student to attend only when he is scheduled to. The student left without incident."

The teenager's mother, Nora Kaplan-Stow, agreed with her son's desire to attend classes on campus full-time.

“I’m 1,000% behind him,” Kaplan-Stow said. “I’m very proud of him. I support him for sticking up for something he feels passionately about.”

The coronavirus has killed more than 2,000 in Suffolk County and 25,000 across the state.

Stow said he plans to continue to show up at school to protest the school's hybrid policy.