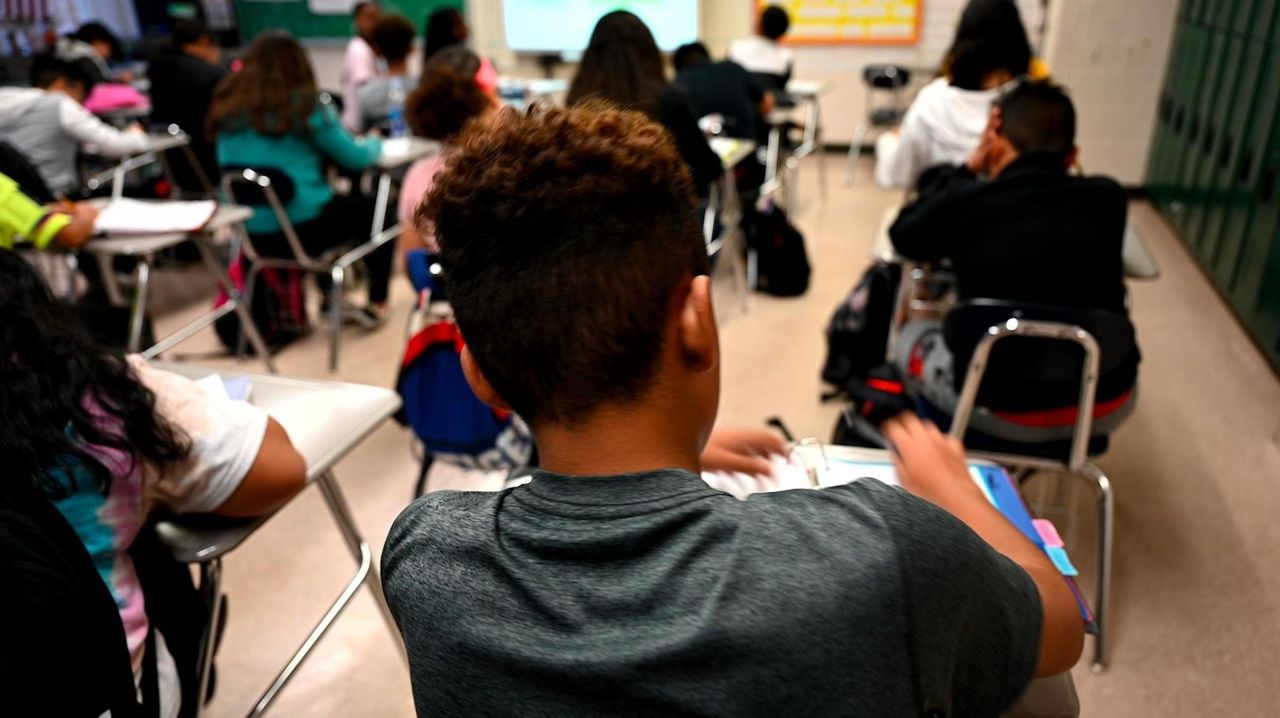 The Wyandanch school district in June laid off 30 teachers, along with dozens of other staff, because of budget cuts. The State Legislature that same month passed a bill that would put a monitor in charge of the district. In August, the superintendent was suspended. And, just before the school year started, the sports programs almost got canceled because of a lack of funding.

The district is at a critical moment, with some residents questioning what's next for the four-school, nearly 2,900-student system. Others, including administrators, board members and community advocates, insist Wyandanch is making progress and challenge detractors to become part of the solution.

Gina Talbert, Wyandanch's acting superintendent, said that though the district is “in a challenging season," it is moving forward on a platform of "greater transparency, greater accountability, and greater collaboration.

"I believe our schools have a great opportunity to do better than we’ve ever done before," she added.

Several community leaders and local officials said Wyandanch's struggles have been because of a mix of factors: political infighting, poverty, insufficient school aid, poor fiscal management, lack of a solid tax base, pressures created by an influx of immigrants, and segregation.

Last school year, 24% of the district's students in grades three through eight were proficient or better on the state’s English Language Arts test, compared with a statewide average of 45%. In math, 20% were proficient, compared to 47% statewide. Wyandanch Memorial High School is the lowest-ranked on Long Island in terms of students earning advanced diplomas, a key indicator of college readiness — 5.1% last year, compared with 56.4% Islandwide. It ranked 112th out of 114 Long Island high schools in graduation rates.

"It’s a win-win situation. We can't go anywhere but up.”

Talbert listed several accomplishments in the district. She said a growing number of middle school students are earning high school credits, taking courses such as living environment, algebra and Spanish in the eighth grade. Last school year, for instance, 66 eighth graders passed the Algebra Regents, which is typically taken by ninth graders, she said.

Students in grades three through five have access to Chromebooks and are Skyping with students around Long Island and outside the United States, Talbert said. The district has implemented a full-time prekindergarten program, and is pumping more resources into its K-3 programs. And, high school students can earn an associate degree in mechanical engineering technology — at no charge — through Farmingdale State College. The program spans the four years of high school, then culminates with two years at Farmingdale, where the first group graduates in May.

"We are turning the tide at the lower level, and we are going to see the difference as we progress through the years," Talbert said.

Talbert has seen some of the district's struggles, too, especially this year. Mary Jones, the superintendent for 14 years, was suspended with pay after prolonged clashes with the board over a wide range of issues, including budgeting and staff layoffs. Jones, who makes $230,000 a year, will be paid through June 30. Talbert said she is not receiving any extra pay as the interim.

The sports programs came close to being canceled for the school year — until Good Samaritans, Suffolk County government and the New York Jets teamed to come up with $350,000 and save them.

In May, Wyandanch voters twice rejected proposed school budget increases, of 40% and 20%, forcing the district into a contingency budget. The contingency budget — as required by law after the proposed budgets failed — for 2019-20 is an estimated $69 million, about $2 million less than last school year.

Spending last school year was about $25,600 per student — compared with the Suffolk County average of $28,770.

Wyandanch, which had 2,838 students enrolled in September, about 74 more than during that same time last school term, said about 87% of its students are economically disadvantaged. The district is the most impoverished on the state's Combined Wealth Ratio, which calculates average family income and property wealth per student. While the state average is 1, Wyandanch dropped from 0.337 to 0.291 in the latest annual figures. When a district's number rises, that signifies more wealth.

Some Wyandanch school officials “try to make the issue we need more money,” said DuWayne Gregory (D-Copiague), presiding officer of the Suffolk County Legislature, whose district includes Wyandanch. “That may be the case, but my opinion is if there is dysfunction, you can give them a billion dollars more, [and] if you don’t address the dysfunction, you are just going to waste that money.”

Shirley Baker, president of the Wyandanch Board of Education, rejected criticisms that the 388-employee district is dysfunctional. She opposes bringing in a state monitor, or the state taking over the district completely. The monitor bill approved by lawmakers has not yet been signed by Gov. Andrew M. Cuomo. The state last took over a Long Island district, Roosevelt, in 2002, and that lasted 11 years.

“Give us our funding that we need and we can do it ourselves," Baker said. “That’s the root of the problem — the funding."

Former Wyandanch board president Khalid S. Lateef said the problems go beyond money, and that minority children are not integrating with white students in more affluent districts — preventing them from gaining access to more resources, which would lead to a better education.

"That school district, despite all the deficiencies it may have had in the past and has today, is kept there because of racism, segregation," Lateef said.

Wyandanch, which is a hamlet in the Town of Babylon, has undergone a demographic shift in recent years, with hundreds of Central American families moving into the majority African American community. The school district is 54% Hispanic and 44% African American.

Overall, the Wyandanch community is 57% African American and 34% Hispanic, according to census figures.

Lateef said the state should desegregate the Island by dissolving districts such as Wyandanch. But he said that will never happen because of politics.

Richard Holland, a 1979 Wyandanch graduate, said the district should be carved up and taken over by systems next door. The southern part of Wyandanch would go to North Babylon, the east to Deer Park, and the rest to Half Hollow Hills, he said.

“For me to say that is almost sacrilegious,” said Holland, who lives in the district. “I loved Wyandanch schools.”

Holland said he attended Wyandanch back when the district was strong in sports and respectable in academics. The district has a different look today.

During a two-year span starting in 2014, more than 300 Latino children — many of them unaccompanied minors — arrived in the district as part of a wave of Central American immigrants who came to several Long Island districts, school officials said. They were among thousands of families who fled violence and poverty in their homelands.

Education officials said that has led to increased costs, including language instruction for children who don’t speak English and sometimes cannot read or write in their native language, along with translation services, including for parents.

Dafny Irizarry, president of the Long Island Latino Teachers Association, said such an influx does add to a district's costs, and the state needs to help pay for the mandated services.

"The district is doing the best they can with the limited resources they have," she said.

The district, which didn’t have enough space for the new students, purchased portable classrooms, including spending more than $1.25 million at Milton L. Olive Middle School. The district said it leased space from the Half Hollow Hills district, and also paid extra for busing.

The Rev. William Brisotti of Our Lady of the Miraculous Medal in Wyandanch said the shifting demographics have not meant an equal voice for Latinos in the community. He noted that no Latinos are on the school board, though they make up a majority of students. He said that is partly because many Latino parents — often overstretched with work — don't always have the time to get involved.

“It should be better, and it’s going to take time,” Brisotti said.

Monique DeMory, a lifelong Wyandanch resident who is African American and administers an annual scholarship program for Latina students in the district, said that as in other communities with big demographic changes, there are tensions between the newcomers and long-established residents.

Latinos "sometimes encounter resistance and ignorance," said DeMory, who is also a counselor in the middle school.

"I also look forward to when there is representation on our school board of the Latinos because that will make sure they have a stronger voice," she said. "It's a concern."

Others said immigration and money are not the root of Wyandanch’s challenges. They point to other issues. For instance, many people get hired — or fired — based on who they know or are related to, Gregory alleged.

“I think when you have poor communities like that and you have a school district that is the major employer in the community, there is such a power grab, and it all stems around getting relatives jobs, these $80,000 no-show jobs and stuff like that,” Gregory said.

Nathan Jackson, a spokesman for the district, disputed those criticisms.

“This is a small district, and the number one employer [in Wyandanch] is the school district,” he said. “Everybody is related or has a friend working in the district or is on the board. But everyone hired by the district is qualified. The state has mandated standards that most people in the community do not understand. You can't sneak a relative in under the wire.”

The district also has suffered for years because of a lack of tax base. Lateef said part of the reason the district does not receive sufficient tax revenue is because many single-family homes have two or three families living there, though the owner is paying taxes only for a single-family home.

There also are not enough businesses, something that has happened over decades as boundaries were drawn and neighboring districts got the tax revenue benefits of things like an industrial park, Lateef said.

“It’s a very complex situation,” he said. “It’s not one or two things. It’s really something that needs to be dealt with from the top down.”

Wyandanch teacher 'having the best time of my life'Wyandanch may have low test scores, but teachers see children with great potential and schools that are making progress.