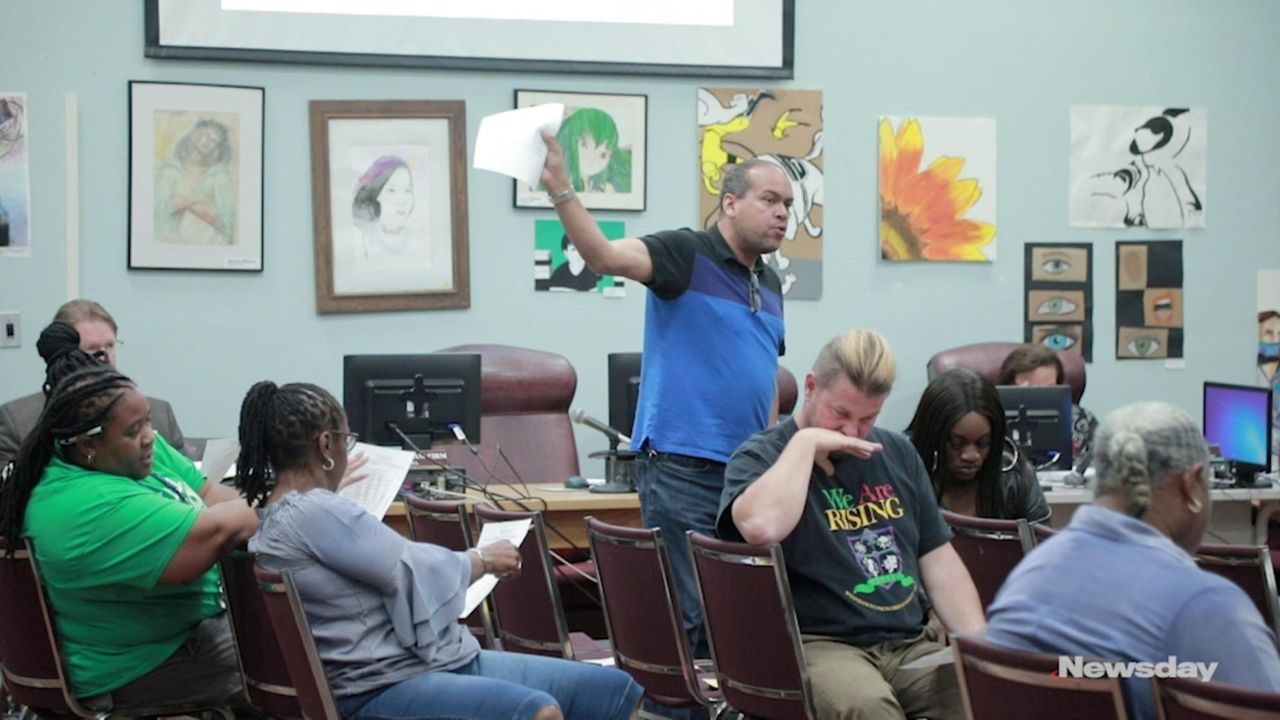 Tensions were high at the Wyandanch school board meeting Tuesday evening as district residents were told about planned cuts, even if a proposed $73.3 million budget passes in a revote later this month. Credit: Newsday / Yeong-Ung Yang

The financially pressed Wyandanch school district will cut at least 10 administrative, teaching and other staff jobs, while also slashing $1 million from student bus transportation, even if a proposed $73.3 million budget passes in a revote later this month, district officials announced Tuesday night.

Should the budget be defeated, staff layoffs and program reductions would bite much deeper, officials added. That scenario would include laying off or eliminating positions of 30 staffers including 15 teachers; elimination of prekindergarten and after-school academic programs; and sharp cuts in sports, officials said.

The revamped $73.3 million budget proposal would boost spending 2.8 percent and taxes 20 percent, according to district officials. It would exceed the district's state-capped tax increase of 0.95 percent. For this reason, under law, the package requires approval by at least 60 percent of those voting to win adoption.

The revote will be held next Tuesday.

Wyandanch’s original spending blueprint, which would have sent taxes soaring more than 40 percent, was rejected decisively on May 21, with 332 “no” votes to 149 “yes” votes.

Many of the two dozen residents who attended a public hearing Tuesday night expressed anger and confusion, as district officials contended that the savings in bus transportation would be gained through consolidating bus routes, rather than eliminating students’ rides.

Jones went on to repeat a point she has often made before — that her prime goal is to save as many academic programs as possible, even if it means cuts in non-academic areas.

Some audience members voiced skepticism, however, over the arguments by district officials that they could save money by reducing the share of bus services outsourced to a regional BOCES, while also saving money by outsourcing more school security to BOCES.

The new budget would add about $920 a year to the average homeowner’s bill, according to the district.

Some residents said they would not be surprised if the effort fails again.

“I think more people will vote in favor of it this time, but I still don’t think it will pass,” said Samantha Lawson, a marketing manager and mother of a second-grader in the district, who was interviewed in advance of Tuesday's hearing. “The community is fundamentally angry at the way the school board is handling our money.”

Lawson was among residents who attended a heated board meeting on May 31, when board members decided on their latest budget after 4 1/2 hours of discussion and deliberation.

At a follow-up meeting on June 5, the board reviewed potential staff cuts in 16 areas, including districtwide reading teachers, three building administrators and curriculum associates in English, social studies and other subjects.

Lawson and other residents said they expect additional cuts in such areas as sports, after-school activities, tutoring and student busing, even if the revised budget wins approval.

Shirley Baker, a board trustee for 12 years, said she felt hopeful that the spending plan would pass.

“The people here are committed to the district for the education of our children,” Baker said while adding, “You have some naysayers.”

The situation could erode further if Wyandanch’s budget is voted down a second time.

Under the state’s tax-cap law, districts that lose two consecutive votes in the same year must freeze taxation for the next 12 months and adopt “contingency” budgets that bar purchases of new equipment and other nonessential spending.

Wyandanch’s contingency budget for 2019-20 would be set at $69 million — down more than $2.3 million from the current year’s figure.

Board president James Crawford, who won re-election in a tight race last month, said at a later meeting that the district plans to rally support for its revised budget through "old-school methods, like knocking on some doors."

At the close of Tuesday’s 2 1/2 /hour budget presentation and debate, Crawford told a reporter an effort would be made to involve parents and students in a social-media campaign in support of the budget.

Crawford himself is an educator and works as an assistant high school principal in another district. While election results indicate he enjoys some personal support, many residents said the district faces an uphill task in winning back public confidence.

One reason for fading trust is a series of critical reports from the state comptroller's office, indicating that board trustees as a group failed to properly monitor Wyandanch's fiscal operations.

A March 29 report stated, for example, that the district overestimated revenues and underestimated expenses during the 2017-18 and 2018-19 school years, and was in danger of closing out the current year with a $3.7 million deficit unless it took action to balance its accounts.

Another resident interviewed before the hearing, Janet Villalta, a real-estate representative and mother of three, said she worried about the school services children could lose, if Wyandanch is forced to adopt a contingency budget. Even so, Villalta hopes the budget fails to pass on the second try.

"If it passes, we're going to get stuck with the tax bill," Villalta said. "We cannot give more money to people who are mishandling the money they have now."