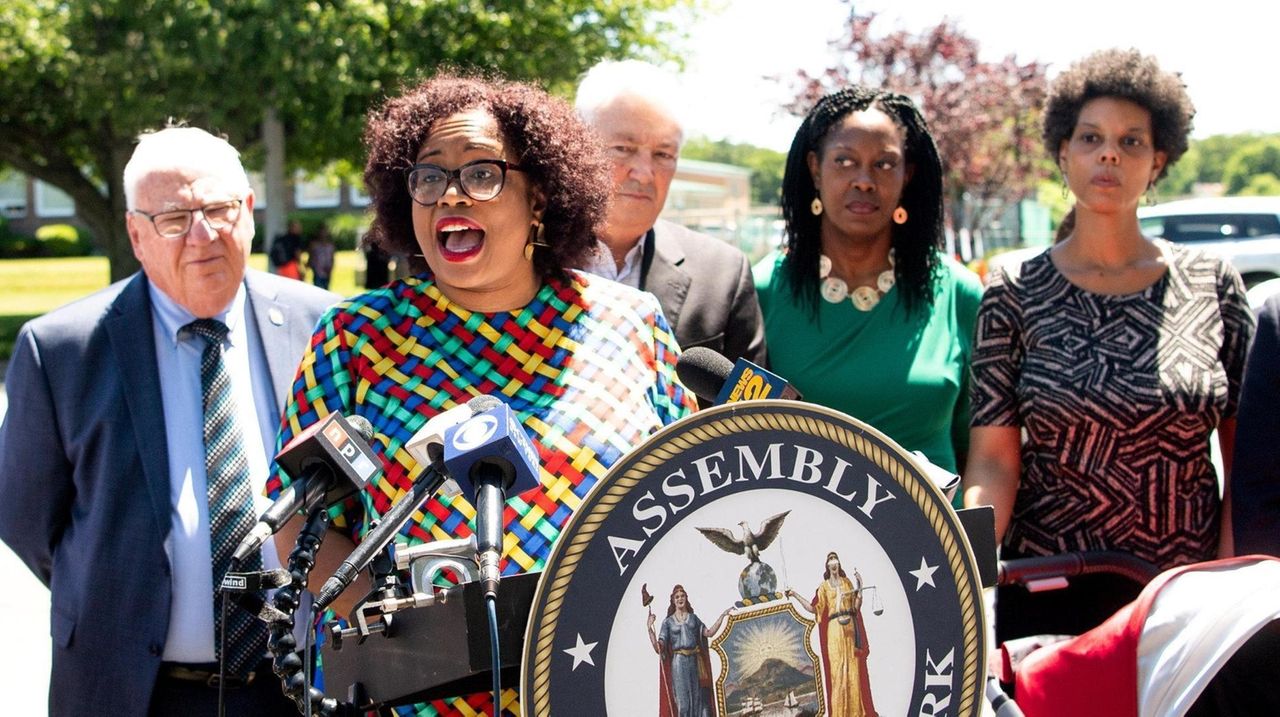 Assemb. Kimberly Jean-Pierre (D-Wheatley Heights) speaks at a news conference Wednesday about the need for a state monitor's oversight of the Wyandanch school district, which was forced to adopt a cost-cutting contingency budget for the 2019-20 school year. Credit: Newsday / Morgan Campbell

Wyandanch High School student Milani Clark listened anxiously Wednesday as state lawmakers assembled at a news conference declared her district in a state of "crisis" that must have independent oversight to clean up its financial mess.

For Clark, 16, who will enter 11th grade in the fall, the fiscal meltdown threatens her future as a runner.

She is among hundreds of Wyandanch students who face the loss of sports, after-school programs and other activities as the cash-strapped system prepares to cut nearly $9 million from its total spending for the 2019-20 academic year.

Clark, who attended the news conference as a spectator, said she worries especially that the district may lose its track team. This spring, Clark set a school record in the 800 meters.

"It keeps me grounded; it keeps me out of trouble," Clark said of her athletic participation.

On July 1, Wyandanch will enter the 2019-20 year on a cost-cutting contingency budget — the first district in western Long Island to do so since the state first imposed tight restrictions on taxation and spending seven years ago.

Under the tax-cap law, districts such as Wyandanch that try to exceed state limits on taxation with cap-busting operating budgets face tax freezes unless they win support from at least 60 percent of those voting. Wyandanch lost its second attempt to pass a budget last week in resounding fashion, with more than 60 percent voting against a revised spending plan.

A growing number of elected officials and residents have called for state intervention in the 2,800-student district. Those in favor point to recent evidence of dysfunctional school management, a divided school board, wasteful spending and long-term failure to curb a growing budget deficit.

The point was underscored when state lawmakers and community leaders from the area held the news conference across the street from Wyandanch's district headquarters. Sponsors of the event are pushing the state to appoint a financial monitor for Wyandanch, similar to a step taken in 2014 for the troubled East Ramapo district in Rockland County.

"This is a moment of crisis. It's going to hurt the students," said state Sen. Phil Boyle (R-Bay Shore), a co-sponsor of bipartisan legislation authorizing a monitor's appointment.

The measure sailed through the State Legislature on June 14 in the final hours of its session, though it must have Gov. Andrew M. Cuomo's signature to become law. The proposed monitor for Wyandanch would exercise an unusual degree of power, including the authority to veto district spending and appointments of new superintendents

Tanya Crawford-Bryant, a nurse and grandmother of three children in the Wyandanch district who stood with the lawmakers at the news conference, said many students are doing well despite the system's problems but a monitor is needed to get financial affairs in order.

"The oversight would be good," Crawford-Bryant said.

So far, Wyandanch's seven school board trustees have stayed virtually mum on the monitor issue. Hempstead's board, in contrast, held a Tuesday news conference where it excoriated the idea of a monitoring board for its 7,600-student system.

On Wednesday, a Wyandanch spokesman issued a public statement on the monitor issue in response to an inquiry by Newsday. The spokesman, Nathan Jackson, said board members received no advance notice of the legislation. That was in contrast to earlier statements by state lawmakers that they had reached out beforehand to district officials.

"We were blindsided," Jackson said.

The prospect of a state monitor arriving soon in Wyandanch remains in doubt. One potential obstacle is a shortage of state funding.

State Assemb. Kimberly Jean-Pierre (D-Wheatley Heights), in response to a question at the news conference, said she and her staff so far have secured about one-third of the estimated $300,000 needed to pay for a monitor during the coming school year.

No date has been set for the state Senate majority leader's office to send the legislation to Cuomo for consideration, lawmakers said Wednesday. They added that they intended to do so before summer's end.

Once the legislation is sent to the governor, he has 10 days to approve or veto it. Cuomo's office has not taken a position on the legislation for Wyandanch or for Hempstead in accord with its practice of not making advance statements about such matters.