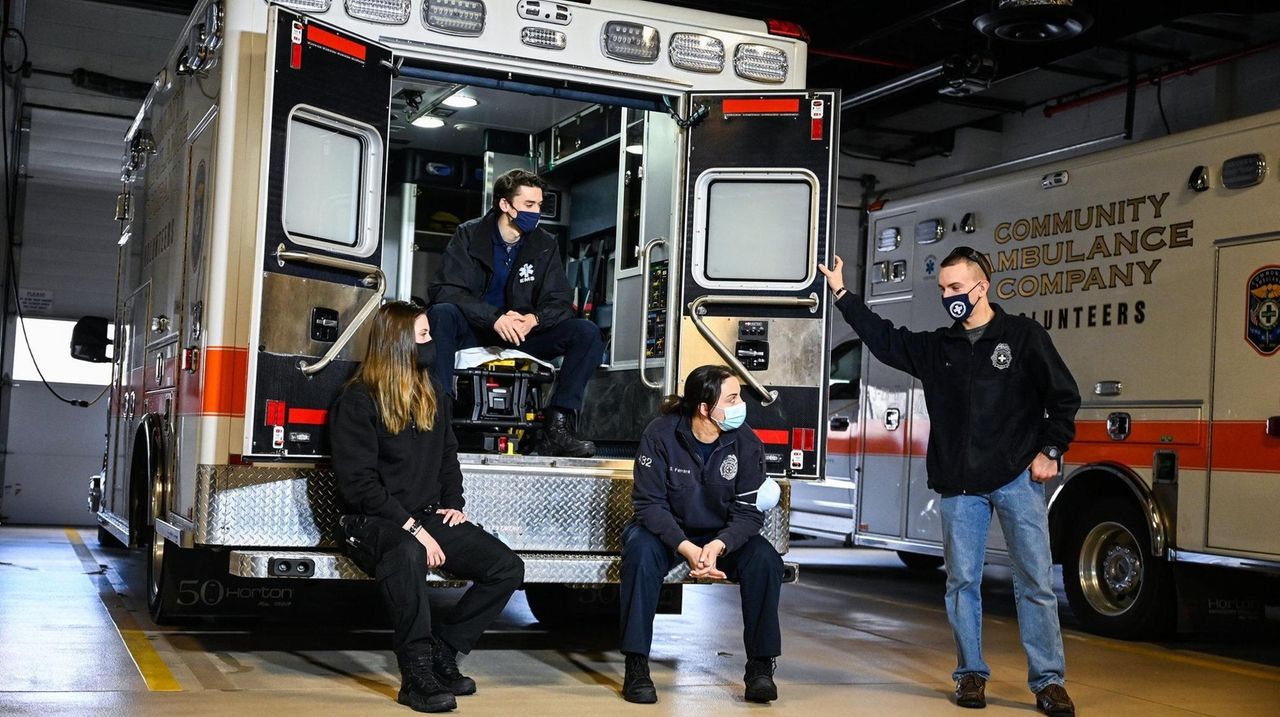 Volunteer fire departments and other emergency responders on Long Island have had to change the way they answer calls during the pandemic.  At the same time, officials said, they have seen an uptick in young people — home because their colleges have moved to remote learning — signing up. Credit: Newsday / Steve Pfost

A year into the COVID-19 pandemic, Long Island's volunteer firefighting and medical first responders said they've made important changes in dealing with emergency calls and discovered unforeseen solutions amid the crisis.

While many local fire departments and ambulance companies saw vulnerable members sidelined by COVID-19, members who would've been away at school or unavailable due to work became active. First responders also gained a heightened awareness of the value of personal protective equipment and decontamination, and developed new strategies in emergency response and coordinating with each other.

"I think what the pandemic did was it brought EMS and fire closer together, by far," said Jamie Atkinson, a member of Suffolk County REMSCO, or Regional Emergency Medical Services Council, and president / director of Community Ambulance Company in Sayville.

"Fire needed our medical expertise in dealing with situations they'd never dealt with before, and we needed their help in dealing with things as well — things as basic as, 'How do we decontaminate an ambulance?' … Firefighters never wore an N95 mask on a call, while we had them for specialized circumstances.

"What it did was got us together," Atkinson said. "That's good."

Though fire rescue and emergency response systems and protocols vary greatly among the more than 70 fire departments in Nassau and the 120 or so fire departments and ambulance companies in Suffolk, the common goal, Nassau REMSCO chairperson Thomas Mastakouris said, remains the same.

And the goal now is adapting to the pandemic.

"It's halftime. You're in the locker room. You've got to make adjustments. But we know the plan and we know where we've been getting beat on the floor and so making those adjustments, well … it's not as difficult now as it was at the beginning of the pandemic, when we knew nothing," said Mastakouris, who also is a commissioner with the South Farmingdale Fire District.

Some of that happened, he said, because high school- and college-aged recruits suddenly were home, remote-learning, while others were working from home — or perhaps not at all.

"I think they saw what was happening [in the world] and said, 'What can I do to help?'" Kaplan said.

Many of those recruits signed up to become medical responders, versus vying to be firefighters, he said. It's a similar story across Long Island.

Rethinking how to respond

The pandemic forced responders to find solutions that may ultimately provide long-term benefits.

The biggest change is how 911 operators answer calls, and something called the "fever-cough," or FC, response protocol. Atkinson described it as a telephone-triage protocol, with operators asking basic questions that have proved hugely important for responders.

If a patient can move or be moved, he said, the caller will be asked to have that person go outside, into an open-air environment, if possible. If not, the caller is asked to open windows at the scene to increase air flow inside — or even to have everyone on premises assemble in one room.

All of that, he said, is designed to limit exposure.

And responders, knowing they might face a COVID patient, are now able to "gear up" with the proper personal protective gear before they arrive.

"Human nature is to run in and help," Kaplan said. "Before, we'd send an entire crew inside. Now, knowing what we know, it's one responder to assess a situation. The whole theory has changed."

Where medical responders used to wear PPE that was no more than a pair of gloves and blood-borne gear, he said, "Now, it's gloves, a gown over your gear, a face mask and eye protection." And for firefighters, gear now includes a face mask.

Decontamination also has been vitally important, officials said. Firefighters with hazmat team backgrounds have provided guidance on cleaning and containment that even ardent EMS and EMT personnel weren't equipped for, Atkinson said.

The basics have included decontamination of ambulances, said Mastakouris, who also is a fire commissioner in the South Farmingdale Fire District.

The more stringent protocols hopefully will remain in place long after the pandemic, he said.

The procedures also help get ambulances and their crews back in service quicker, Atkinson said. And that can improve 911 response times.

As Mastakouris said: "We're all aware there's variants out there and so this thing could spike again. But, we know how to handle this now. We know how to knock it down. We became smarter, became more aware."

COVID-19: From 799 deaths in one day to path back to normalcyGov. Andrew M. Cuomo announced Long Island's first confirmed positive case of the coronavirus on March 5, 2020. Today, vaccines offer hope of a return to normalcy, yet the future remains uncertain. See the percentage of LIers who are fully vaccinatedCheck the latest numbers on how coronavirus has spread in your community. See latest news on the coronavirus, vaccinesStay up to date with the latest on the pandemic.