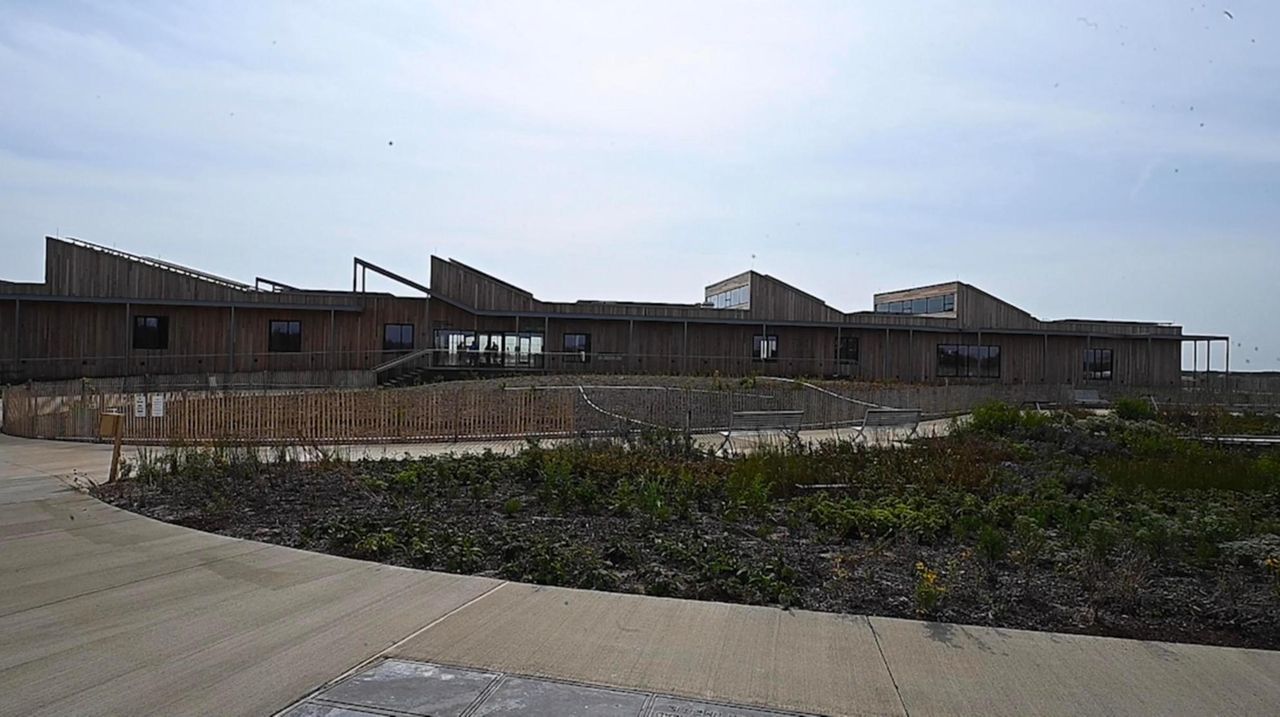 New York State and LIPA officials cut the ribbon Friday on a $25 million energy and nature center at Jones Beach that officials hailed as an educational gem at the crossroads between power and the environment, but which critics snubbed as expensive and ill-placed. Credit: Newsday / J. Conrad Williams, Jr.

New York State and LIPA officials on Friday cut the ribbon on a $25 million energy and nature center at Jones Beach that officials hailed as an educational gem at the crossroads between power and the environment, but which critics snubbed as expensive and ill-placed.

Designed to "bring human beings, energy networks and the natural environment together," the center features dozens of indoor and outdoor exhibits, an outdoor veranda overlooking the dunes and ocean

The net-zero energy-use building includes "state-of-the-art exhibits, teaching spaces, laboratories, a new 8.8-mile bike path, and a new 219-acre preserve." A 9.5-acre section of parking lot was replaced by "pollinator" vegetation, and there are six electric-vehicle charging stations and 13 outside exhibits.

But some saw the exhibits and the money and energy spent to build them as inconsistent with the environmental message.

"This is a really clear demonstration that not every green technology project is environmentally friendly," said Alena Walters, a critic of the project and one of nine plaintiffs who sued to try to stop it, alleging violations of state and federal laws. "The areas you could formerly view as just wild scrubland now look like city park plazas with aluminum furniture and bicycle racks and sidewalks."

Walters conceded the main building itself is "very beautiful," but said it displaced a Robert-Moses-era comfort station that "served the public in an important way."

She called the building’s promise of bringing public education to the nexus between energy and nature "inconsistent with what has happened here." Added fellow plaintiff Herb Jurist, "What they've done is destroy the appearance of a beautiful area."

LIPA and the New York State Department of Parks, Recreation and Historic Preservation covered the bulk of the costs to design the center, demolish the old comfort station and build the new center and a separate bathroom facility. Other state agencies, including the New York Power Authority and the state Energy Research and Authority, also contributed, as did industry donors.

The net-zero energy center produces its own power and features demonstrations on renewable energy, including a giant wind-turbine blade in an outdoor display. Entry is free to those who pay the $8-$10 cost to enter the Jones Beach West End.

State Parks Commissioner Erik Kulleseid in an interview expressed surprise at the criticism.

"You still have the beach out here," he said. "There’s a parking lot with a comfort facility. People can still walk to the beach. The fishermen are still here. All that activity continues, and yet we’ve pulled out 12 acres of concrete. It’s a zero-net energy area. We’ve populated the area with native species. I think we’ve really made a statement about adaptive reuse."

As for the cost, he said, "We feel like it’s Jones Beach and you have to do it right … We feel like this has been a great investment in the future of the park. It’s a great way to say, Jones Beach is changing with the times."

Tom Falcone, the LIPA chief executive who helped spearhead the project with $9.75 million in ratepayer funds for design and construction and $6.45 million to operate it over 25 years, said: "It’s still a beautiful and scenic and serene place."

"This is what you’re supposed to do if you’re an electric utility," he said of ratepayer funds expended. "You’re supposed to be helping educate customers and this is another educational opportunity ….We’re going to be running programs out of here."

Asked if the center was better situated for Nassau residents than those in eastern Suffolk, Falcone said, "We have been talking with Brookhaven National Lab, they have something in development, it’s still early, we’ll see."

He added, "We do realize it’s a long way to go if you’re in Suffolk County but I think you would be rewarded with one of the most beautiful spots to spend the day. It’s worth the drive."