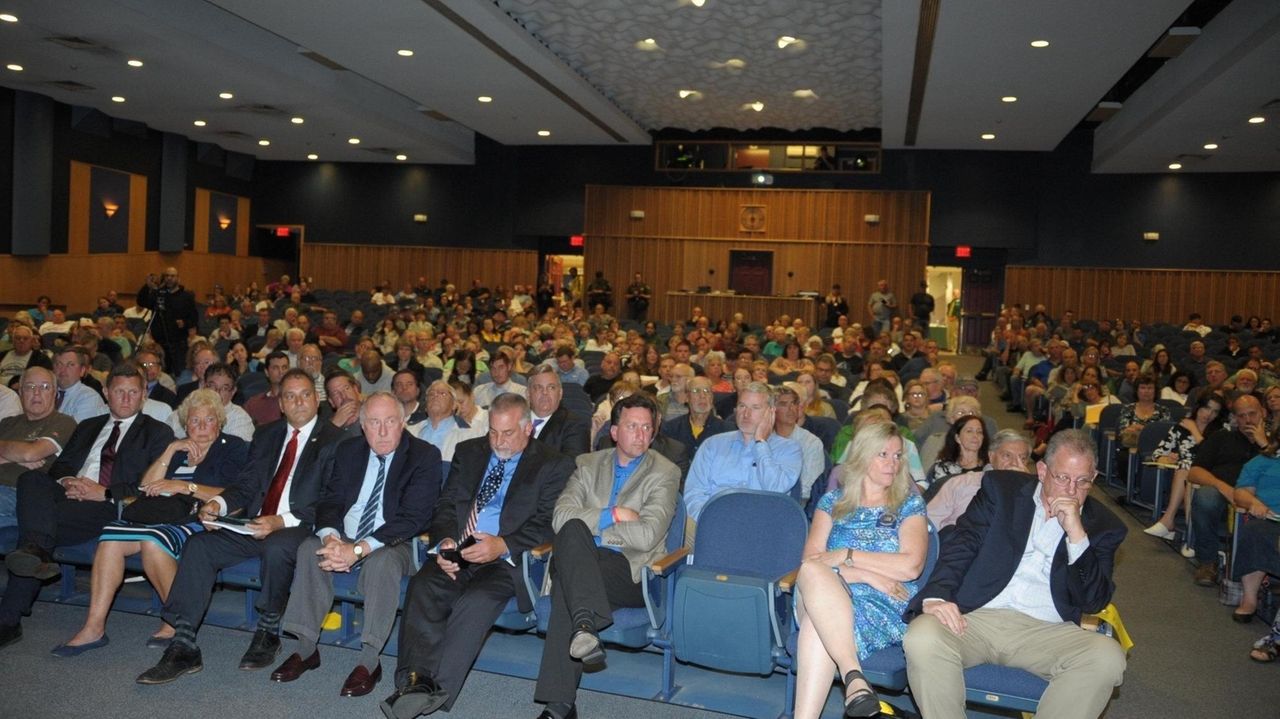 Hundreds packed Bethpage High School Monday to hear an ambitious state plan to contain and treat groundwater pollution from a toxic plume that has affected 11 public water supply wells and threatens another 16 as it moves a foot per day.  Credit: Howard Schnapp

Hundreds packed Bethpage High School to hear an ambitious state plan to contain and treat groundwater pollution from a toxic plume that has affected 11 public water supply wells and threatens another 16 as it moves a foot per day.

“This is a big night in this community. This is the next giant leap forward in a problem some of you have been dealing with for decades,” said Martin Brand, deputy commissioner for the Department of Environmental Conservation.

He called the groundwater pollution well, which is now more than four miles long, “a legacy of industrial contamination in this community,” referring to the Bethpage manufacturing site once used by the Navy and Northrop Grumman.

The $585 million state plan would be the first that seeks to contain the spread of the pollution in groundwater, as well as extract and treat the contaminated water.

To do that, it would operate 16 wells on the edges of the plume and 8 wells pumping “hot spot” areas with higher concentrations of contaminants. The water would be treated and recharged into the aquifer including at recharge basins and through irrigation at Bethpage State Park and at the Massapequa Creek.

Many residents came in hopeful about the state’s commitment, but wary after years of promises to address the plume, only to see it continuing to spread.

Before the formal hearing, he pointed to his house on a map of the plume, highlighted in pink. “This is where I am. I’m in the middle of it,” he said.

Lenny Tricarico, 72 of Massapequa, said he’s watched the edge of the plume spread, now south of the Southern State Parkway, nearer to where he lives.

“I’m not too happy about it, but it’s just a fact,” he said, noting that his wife, like many others in the community, drink bottled water, despite assurances by water providers that the water meets all state and federal drinking water standards.

Also at Monday's hearing, state health officials assured residents that their water was safe to drink.

Water providers and local politicians have been pressing the state Department of Environmental Conservation for years to force Northrop Grumman and the U.S. Navy into a more aggressive cleanup plan.

They said in recent years, the state DEC has been more responsive.

Bethpage Water District Commissioner John Coumatos called this “a big day for Bethpage. The start of a new era.”

Brand said after the DEC picks a final plan, sometime after the public comment period closes July 7, they’d ask Northrop Grumman and the Navy to implement it.

“If they don’t, we’ll use all our resources at our disposal — legal, political and social,” Brand told the audience.

During the public comment portion, residents expressed fear about cancer and other health effects, as well as timing.

Gina McGovern, a 25-year-resident of Bethpage, said “it sounds like a wonderful plan. My question is about time and money.”

She asked “what’s the carrot and what the stick?” to get them to the table.

“Grumman stopped loving Bethpage a long time ago,” she said.

Brand said good science would bring them to the table, but state law requires them to ask the polluters to pay for the plan before taking further action.

The state's study found the plume has spread 4.3 miles south toward the Southern State Parkway, was 2.1 miles wide at its widest point and up to 900 feet deep.

The Navy and Grumman set up manufacturing, research and testing facilities on a more than 600-acre plot in Bethpage beginning in the late 1930s. The facility was home to the Apollo moon lander and turned out Hellcat, Tigercat, Albatross and other planes during World War II and the Korean War.

The DEC's plan is expected to take five years to design and implement. It could take 110 years to fully remove the contaminants from groundwater, according to state documents.

Northrop Grumman and the U.S. Navy have said they plan to submit public comments on the DEC proposal.

Brand said the new plan would be on top of existing cleanups that Northrop Grumman are undertaking, including pumping wells and plans to remove contaminated soil.

Stan Carey, superintendent of the Massapequa Water District, which is in the path of the plume, said the district supports the proposal, but it wants to see the plan implemented in three to four years.

"Five years seems a little too long for us given the history," he said. "The fact this has been going on 40 to 50 years ... now we're getting to full plume containment and it'll take five years? It's kind of tough to swallow."

Mike Boufis, superintendent of the Bethpage Water District, said calls from residents since the plan became public has been for an expedited schedule. He said he expects "bits and pieces to be moving forward before the five years is fully developed."

Rich Humann, president of H2M architects + engineers, a longtime consultant for Bethpage Water District, said, "We’re putting our faith in the state that they know their plan and know what it takes to get done."

Water providers had been critical of the DEC for years for not forcing a more aggressive cleanup and allowing the plume to spread, but generally praised the DEC's new recommended plan, which it has been developing since 2017.

The plan the state favors was detailed in a report released last month. It calls for wells to be located inside the plume to "aggressively" remove areas with the highest contamination concentrations. A series of wells around the edges would prevent the plume from spreading.

The state DEC can modify the plan or select alternative proposals based on new information or public comments.

Alternative proposals could cost from $332 million to $748 million. The DEC said its recommended plan is the "most cost-effective" because it includes extraction of groundwater from the central portion of the plume, combined with hydraulic containment of the entire plume.

DEC officials said they expect Northrop Grumman and the Navy would oppose their plan, given their previous statements that containment of the plume isn't feasible.

Gov. Andrew M. Cuomo and other state officials have said that if the Navy and Grumman balk at the cleanup proposal, the state would proceed with the project and sue them later to recover the costs.

“Bethpage and residents are not responsible,” Kenna said. “It’s the Navy/Grumman plume.”

Those who couldn't attend Monday's public hearing can submit written comments through July 7 to: