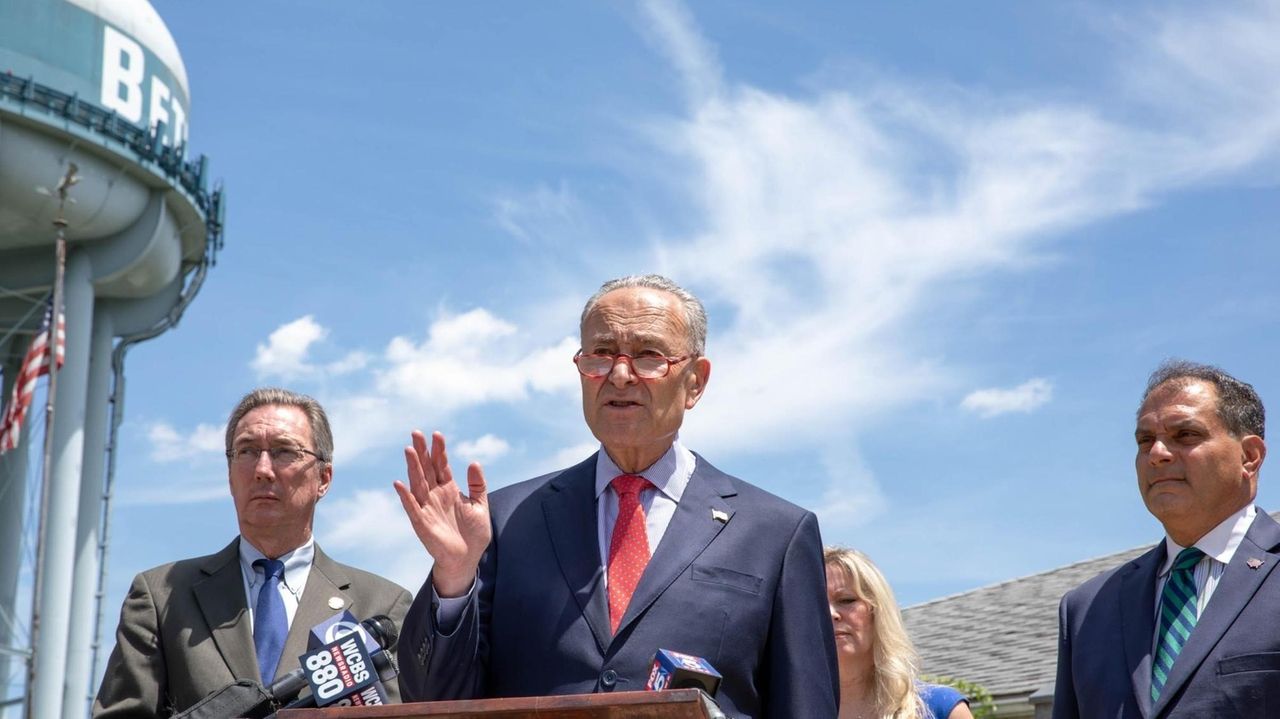 The U.S. Navy would hire a second consultant to check radium levels in Bethpage groundwater under an amendment being pushed by Sen. Chuck Schumer, who said Monday the contractor has a "checkered past."

Pasadena, California-based Tetra Tech in 2017 was caught falsifying soil tests at a San Fransisco Superfund site and is being sued by the U.S. Justice Department.

"We don't want anyone to have any doubts about the safety of the water supply, and if we make sure there's a second check, we'll all be much happier," Schumer (D-N.Y.) said at a Monday news conference at Bethpage Water District headquarters with other officials.

Tetra Tech did not respond to requests for comment.

The Navy, through Tetra Tech, has done radium testing as part of the pollution cleanup in Bethpage from the former Northrop Grumman and Navy facilities. The Navy previously has said radium levels are within naturally occurring ranges, though some environmental groups and attorneys for residents have raised concerns about the levels.

Since 2012, one Bethpage Water District well has not been used for drinking water because of elevated radium levels, though it did not exceed state or federal drinking water standards.

“I think anytime you can get another set of eyes looking at the data, just to confirm nothing gets missed is a great thing," Mike Boufis, superintendent of the Bethpage Water District, said after the news conference. "I don’t feel this is slowing up any other process. Hopefully it’ll bring some closure to what we’ve been battling — is this naturally occurring? Or is this from the plume?"

Radium was widely used during World War II because its luminescence allowed aircraft dials, gauges and instruments to be seen at night. It occurs naturally at low levels in rock, soil, water, plants and animals, and is considered a carcinogen.

Melville-based attorney Nicholas Rigano, who represents a group suing the state and Navy over the cleanup and possible health effects, said the testing should be done by a third party. The Navy, Northrop Grumman and their contracts have "misled the public" about what levels are naturally occurring to avoid having to pay for the cleanup, he said in a statement. He said the $585 million proposed state plan released in May to clean up and contain the plume "ignores radium, leaving it to persist in the plume indefinitely."

A spokeswoman for the state Department of Environmental Conservation, which is overseeing the cleanup, said it "carefully reviews all sampling plans and data and requires the U.S. Navy to provide any and all information related to the work conducted at Navy and Grumman remediation sites to ensure the accuracy and validity of information collected."

The Navy and Northrop Grumman did not respond to requests for comment Monday.

Tetra Tech already has completed four radium samplings at the Naval Weapons Industrial Reserve Plant in Bethpage, according to Schumer's office. The first sampling was done in April and May in 2018, the second in September 2018, the third in December 2018, and the fourth most recently in March. Tetra Tech is scheduled to conduct a fifth sampling this month.

In September 2017, the Navy released a preliminary analysis of a cleanup at the Hunters Point Shipyard in San Francisco, which found that nearly half of the samples taken from the site had been falsified or manipulated, according to Schumer's office. Two field supervisors pleaded guilty in 2017 to falsifying records by directing workers to substitute samples from potentially contaminated areas for clean soil samples.

The plume from the former Northrop Grumman and Navy facilities in Bethpage is considered Long Island's largest groundwater pollution source, with 24 contaminants, including TCE, a human carcinogen that according to the Environmental Protection Agency is toxic to the immune and reproduction systems, but which is being treated for at well heads.

Oyster Bay Superintendent Joseph Saladino said tests for radium should be subject to a "third party review. In that way, our residents can feel safer, and this can ensure this is getting done right."

He said even though radium has been found as part of the legacy of the Grumman and Navy operations, the drinking water has met federal and state drinking water standards.

"Safe, clean affordable drinking water should be a right. Not a privilege," he said.

The state cleanup plan has drawn praise from Bethpage officials after years of complaints that New York officials had not moved aggressively enough.
"We can't let Navy and Grumman have another five, six, seven years, which means 15 to 20 down the line. We have to take care of this now," Bethpage Water District Trustee John F. Coumatos said.

According to a Department of Health spokeswoman, “Routine testing has not shown a violation of drinking water standards for radium for the Bethpage Water District.” She said the level at the Bethpage well taken off-line is “not inconsistent with some naturally-occurring radium concentrations.”