One of the worst brown tides in years may threaten hard clams in the Great South Bay, weeks after a mahogany algae bloom devastated oyster larvae in Islip’s hatchery.

And in eight Suffolk ponds, blue-green algae — which can be toxic to humans — have already emerged this summer.

Feasting on the nitrogen long poured into Long Island's waters, primarily from home cesspools and septic systems but also from fertilizers, the latest bloom flaring in the Great South Bay — one of the metropolitan area's favorite places to fish, sail and swim — is a particularly troubling one, scientists told Newsday.

"This is the most intense and widespread brown tide in four years," said Christopher Gobler, endowed chair of coastal ecology and conservation and principal investigator with the Gobler Laboratory at Stony Brook University. 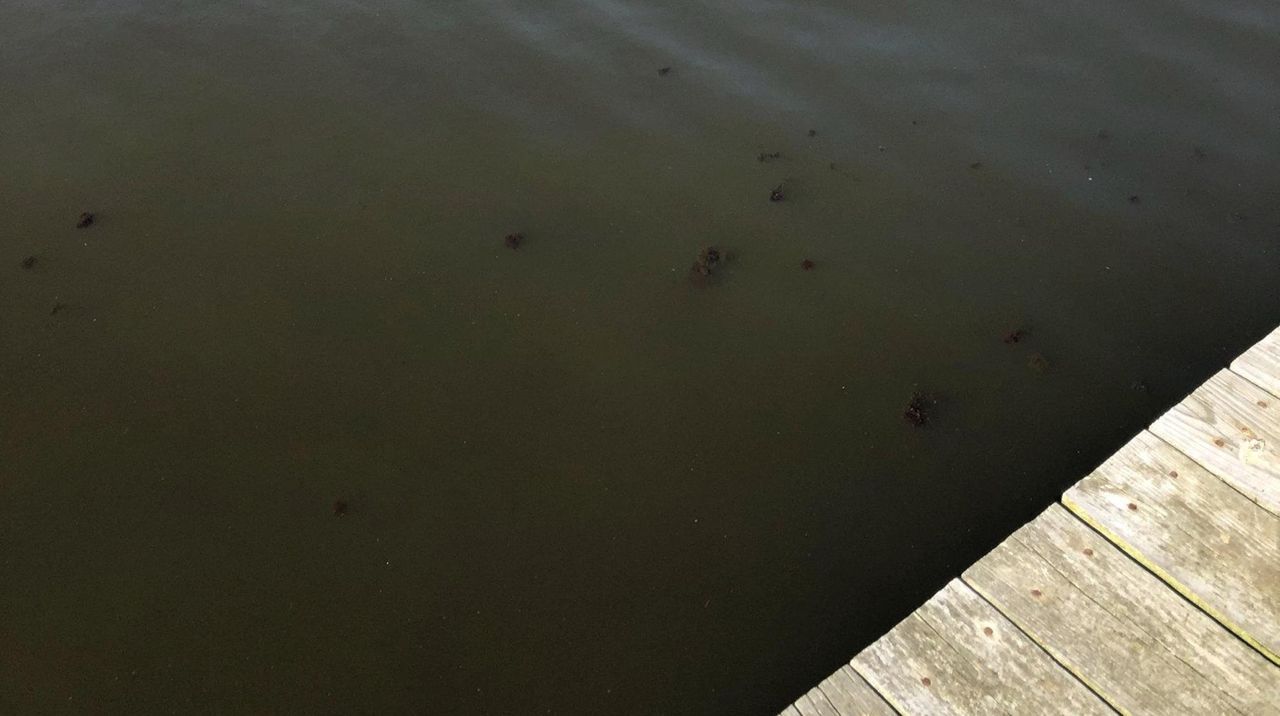 Algae bloom after algae bloom has struck since the mid-1980s on Long Island, killing shellfish and fish by depriving them of oxygen, or by releasing toxins. Algae blooms have decimated Peconic Bay’s scallops through the years.

And while many blooms are not harmful to humans, blue-green algae can trigger a host of illnesses, including rashes, headaches, fever and trouble breathing.

Algae blooms can also harm many key bottom dwellers, as they block the sun rays needed by eel grass and other plants, causing them to die. That means more erosion, as the plants anchor bottom sediments, and fewer fish, mollusks and shellfish, which need the plants for nurseries.

Now, said Gobler, recently spawned clams could also be affected by the brown tide in the Great South Bay.

"The fate of these young-of-the-year clams may rest on the duration of the current brown tide, which usually intensifies through June and into July until water temperatures get into the mid-70s," Gobler said.

What are algae blooms?

Algae are both crucial and destructive powerhouses. During the day, they produce 50% to 85% of the Earth's oxygen through photosynthesis, scientists say. Yet at night, like so many forms of life, they burn oxygen. That is why nighttime levels of dissolved oxygen can plummet but rebound during the day.

Certain conditions such as excess nitrogen cause some harmful species of algae to skyrocket, such as brown tide and blue-green.

"There are any number of factors that will determine whether you’re going to see harmful algae blooms anywhere," Jacqueline Lendrum, research scientist at the New York Department of Environmental Conservation, said in an interview.

For example, she said, a cloudier summer could mean fewer algae blooms because they need light to photosynthesize.

How winds and tides mix layers of water that are at different temperatures and have varying amounts of oxygen is another crucial variable, scientists said.

"If it’s very windy and choppy … the cyanobacteria can’t get to the surface to get to the sunlight they need to grow and reproduce," Lendrum said, referring to the culprit in blue-green blooms. "They get squashed down and sort of can’t find their friends to stick together and bloom."

After the summertime blooms die, algae sinks and decays, a process that also consumes oxygen.

A drought, by evaporating water atop a pond or lake or bay, can also allow water from the bottom to rise up — and the lack of dissolved oxygen could possibly kill fish or shellfish, explained Charles Poukish, a program manager at the Maryland Department of Environment.

The pandemic, by spurring so many New York City residents to join year-round East End residents in the work-from-home revolution, "to a small degree" likely is increasing nitrogen pollution, Gobler said.

'We do know there were hundreds of (home septic or cesspool) system failures.'

Peter Scully, Suffolk deputy county executive, noted vacation homes now are lived in all year-round, and while no data shows nitrogen pollution spiked, "We do know there were hundreds of (home septic or cesspool) system failures and we theorize that they're the result of more intense use of marginal systems."

Bob Eichinger, COO of the septic system and cesspool maintenance company Clear River Environmental in Ronkonkoma, agreed: "Our business absolutely increased during the pandemic by a significant amount, but it wasn’t planned-ahead (projects), it was our emergency business."

While it may take decades for all the nitrogen from wastewater to reach inland aquifers, where groundwater collects, scientists say that on the coast, it may only take days or weeks for it to reach streams, rivers, estuaries and bays.

'Some of these algae ... now can bloom almost all summer because the temperatures get warm enough.'

In Suffolk, almost 70 bodies of water in the county had a suspicious, a confirmed or a highly toxic bloom in at least one of the years from 2012 to 2020, the DEC’s website shows. By contrast, Nassau, which has fewer ponds and lakes and relies mainly on sewers, had one bloom in Kings Point Pond in 2018 and a suspicious one in Schodack Pond in 2015, the DEC says.

The problem, according to county officials, is that only about a quarter of homes have sewers. About 70% of the polluting nitrogen flows from 360,000 cesspools and septic systems — and more than two-thirds of cesspools put in before 1973 "are essentially injection wells that direct contaminants to groundwater," the county says.

Recently, Gobler's laboratory at Stony Brook University revealed that the new brown tide's density in Patchogue Bay was the highest it has been since 2017, with more than 300,000 cells per milliliter — nearly nine times the level that can hurt marine creatures.

Lower but still harmful amounts were also found in the approximately four-mile stretch of coast between Sayville and Patchogue.

And in late May, blue-green algae was found in Lake Agawam in Southampton and Wainscott Pond in East Hampton, about a month after the DEC began testing a trio of floating solar-powered ultrasonic devices that cause algae to sink and die from the lack of sunlight. They also release hydrogen peroxide, a known algae killer that then breaks down.

The DEC will evaluate whether the buoys work this summer and expects to release the results by autumn.

What’s being done and how you can help

In addition to the ultrasonic devices, the DEC said it may use an aquatic pesticide to try to cleanse Lake Agawam.

Other experiments include trying to restore the shellfish industry and growing sugar kelp, which is also fueled by nitrogen and could improve the growing acidity of the Great South Bay.

A total of 10,000 cesspools and septic systems would be replaced by 2023, half with upgraded technology. The other half, located near South Shore rivers, would be linked to sewers along with downtown business districts, the county says.

Starting in 2024, 177,000 cesspools and septic systems in high-priority areas would be replaced — a 30-year $1.9 billion project — if owners who sell or whose systems fail are required to upgrade.

Over the 15 years beginning in 2054, unimproved areas would gain new systems, costing $1.3 billion.

Grants and loans are already offered by the county to improve home systems, and Bellone in April unveiled a $100 million plan to enlarge a sewer district and create a new one.

Starting July 1, the county says new homes and renovations that add a sixth — or more — bedroom and commercial buildings all must install advanced systems.

While upgrading Suffolk’s home cesspools and septic systems is a costly and lengthy process, the Narragansett Bay, New England's largest estuary, shows such initiatives can make a difference.

There, improving wastewater treatment, reducing bacteria, and other steps reclaimed more than 3,000 acres for growing shellfish from 2010 to 2017, the U.S. Environmental Protection Agency says.

'As Long Islanders, we have to reconsider whether that ideal lawn, that perfect green lawn, is worth losing the Bay over.'

Robyn Silvestri, executive director of Save the Great South Bay

Long Islanders can immediately help limit algae blooms by throttling back on nitrogen-rich pesticides and fertilizers that are 10% to 12% of the source, scientists say.

They also can plant rain gardens with native species, and keep rainwater from running off with barrels or porous driveways, said Robyn Silvestri, executive director of Save the Great South Bay.

"In general, as Long Islanders, we have to reconsider whether that ideal lawn, that perfect green lawn, is worth losing the Bay over," Silvestri said.