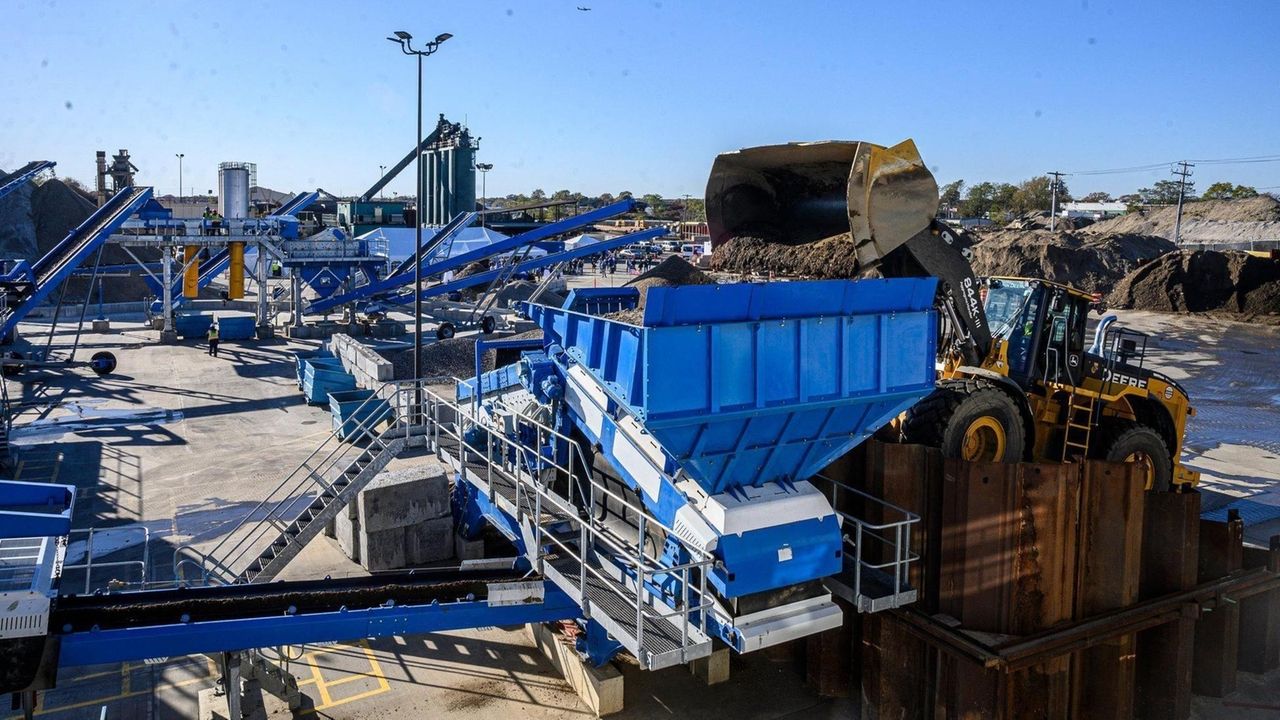 One of the world's largest facilities to clean contaminated soil has opened in Farmingdale, beginning a new chapter of soil recycling to address the ground pollution that has plagued Long Island.

State and local officials celebrated the opening of the Posillico Materials Soil Wash Plant on Thursday, saying it will protect the Island's drinking water and groundwater, even as it helps return polluted properties to good use.

"This is a new technology for the world," said Posillico Materials partner Michael Posillico. "This will treat millions of tons of material that would potentially contaminate the ground water."

Soil washing is not a new concept, he said, but the company has combined that with a process to treat the resulting wastewater on site as well.

Island officials praised the new facility as a shared triumph of the private sector, public agencies and the environmental community. Company officials say it is the largest such facility in the world.

Carrie Meek Gallagher, regional director for the state Department of Environmental Conservation, said the facility would greatly assist the Island in addressing its history of toxic dumping and industrial pollution.

Beforehand, thousands of tons of polluted soil had to be trucked off the Island to landfills approved to take such toxic materials. Then, clean soil had to be mined to fill the sites, she said.

"It helps us reduce the amount of contaminated soil we have to take off Island," Gallagher said. "We can reuse the material when it's cleaned. And we don't have to mine new gravel, soil and rocks."

Long Island has been a dumping ground for the illegal disposal of toxic waste, which officials say has been fueled by its proximity to booming construction in New York City.

Elsewhere, the legacy of Grumman in Bethpage came with contaminated soils and groundwater. Wells on Grumman property were tainted by the late 1940s, volatile organic chemicals had been found in water by the 1970s, and in 1983 the state added the site to its hazardous waste Superfund list.

The plant has been operating for two months and has already treated 50,000 tons of soil contaminated by fuel oil in Harbor Island, Posillico said.

A company affiliated with Posillico has purchased the property, so there will be no cost to taxpayers in the cleaning of the site's contaminated soils, he said.

On Thursday, visitors watched as contaminated soil was loaded into the sprawling mechanism, where tall conveyor belts fed it into machines that shake out and wash varying sizes of rocks and stones, sand and gravel.

From there, the wastewater is piped into a giant pool that can hold 190,000 gallons of the muck, which contains the vast amount of the contaminants. These pollutants are filtered out and compressed into slabs of waste, weighing about 1,000 pounds each, which are shipped to approved landfills.

In the process, the facility can recycle up to 90% of the soil, Posillico said.

"This is the perfect place and the perfect time" for this plant, said Suffolk County Executive Steve Bellone. "I think it will be a model not only for the state but for the country."

Town of Babylon Supervisor Richard Schaffer recalled his initial reaction to hearing about a facility that would bring a massive amount of contaminated soil to his area.

"I thought I should pack up because I'm not going to be town supervisor," Schaffer said. "But this is exactly what's needed … This is the ultimate in recycling."