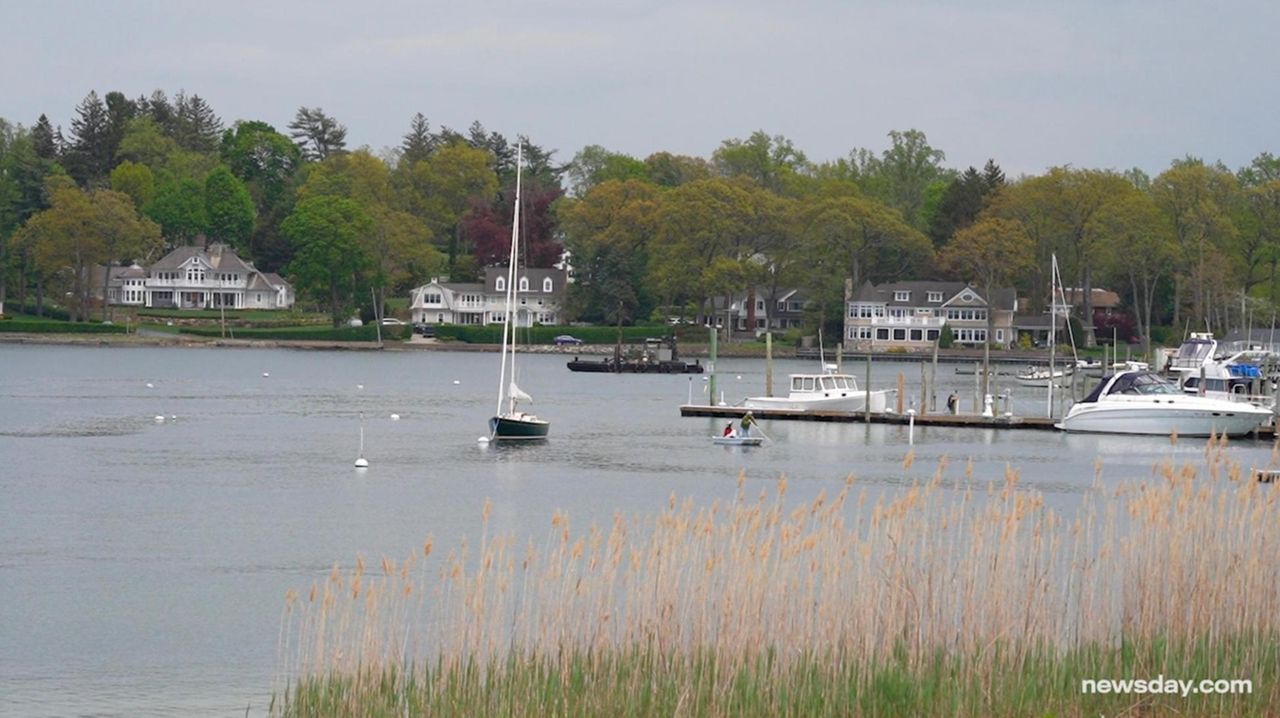 Jessica Morgan, a social worker and therapist, said she entered therapy after experiencing "a lot of climate anxiety." Marci L. Bortman, the climate adaptation director of the New York division of The Nature Conservancy, said "We work toward restoring natural areas so that nature can protect us." Credit: Randee Daddona

Marty Van Lith, 73, says in the decades he's lived with his wife in the low-lying community of Brookhaven hamlet along Beaver Dam Creek, he's seen evidence of climate change.

"Now I see flooding, oh boy do I see flooding. And it's something that 40 years ago when I moved here, you would see occasional flooding, but now you see it with almost every rainstorm," he said, meaning heavy storms.

He described water going right up to the house at least once a year, on average, and the backyard occasionally going under. The salt marsh bordering their property used to have water on it about two weeks every month during high tide — now it's always inundated, according to Van Lith.

"We're very anxious. We're worried," said the retired electrical engineer from Brookhaven National Laboratory. "We're now in our 70s, and we're worried if we're going to be driven out of our home."

"We're worried that if we survive into our 80s, that we won't have anywhere to live."

Van Lith and his wife, Anita Cohen, 75, have been involved in the climate and environmental movements for many years. They're among the Long Islanders dealing with climate anxiety — a term that has gained prominence as awareness grows about the environmental crisis behind it.

Such anxiety can be compared to the more widespread reaction to the coronavirus pandemic, according to Sarah Jaquette Ray, author of "A Field Guide to Climate Anxiety." She believes the uncertainty the pandemic has pushed front and center "is just an intensified version of what young people had been feeling already" with climate change. She calls Generation Z the "climate generation."

"The shock of coronavirus is certainly there with young people, but at least with my students, they were already feeling this on the horizon years ago. So this has just fast-forwarded it and put it into one really concrete cultural moment," said Ray, who teaches environmental studies at Humboldt State University in Arcata, California.

But climate anxiety isn't just for the young — even though he has a certain reserve, as Van Lith put it, "There's real obvious signs that change has happened."

He was a bayman in high school and college, clamming for extra money back when they were plentiful in the Great South Bay.

"At one time there were literally hundreds of boats on the Great South Bay, clamming. And it was just a very old-time, Long Island occupation. And we watched that disappear. We watched the bay itself change," he said.

For a long time, he had a January birthday tradition of hiking as far as he could on the beach on Fire Island National Seashore.

"There used to be the greatest dunes in the world. Just beautiful area," he said.

The gun mounts from World War II used to be behind the dunes, "then I watched them suddenly be on the ocean side, and then before you knew it they were gone."

Liz Moyer from We Heal for All, who led a climate anxiety workshop hosted by Sunrise NYC in February before the coronavirus outbreak, says climate anxiety is "one term to describe a whole host of climate experiences, which could also be climate grief, or depression due to climate change."

They are "the normal, healthy emotional responses" that come with facing or working with what Moyer calls the exponentially growing, existential climate crisis.

Dr. Janet Lewis, a psychiatrist in the Finger Lakes region, also defines climate anxiety as an umbrella term. "It refers to all the different emotional reactions that people can have to climate change as well as to non-adaptive coping mechanisms," meaning something that doesn't work well in the long run, like denial, she explained.

Lewis is on the Climate Psychiatry Alliance's Steering Committee.

"We're all in various stages of emergence from what would be called disavowal, which is a defense mechanism where we're able to know and not know something at the same time. And that's the position where most of us are largely in with regards to climate change," she said.

We know it, "but we go about our daily lives as if we don't know it."

Lewis says there's a lot of concern about not pathologizing climate anxiety, so making it an official term is a bit tricky.

"We're at the very beginning of thinking of how it would best be included" in the Diagnostic and Statistical Manual of Mental Disorders (DSM), the authoritative handbook used by health care professionals. The way that would be done is as a "V code," which Lewis explained "are circumstances that even though they're not pathology, they're not mental illness, they still might be a focus of treatment," like a divorce.

'IS THE SCHOOL BUS GOING TO BE ABLE TO COME DOWN THIS ROAD?'

"Climate has always been part of my personal anxiety as someone who is at that nexus between land and water," said Marci L. Bortman, who lives in Huntington and has a background in coastal oceanography.

With climate change, we see accelerated sea level rise, more dramatic storm surge and groundwater flooding on Long Island's coast as a result of seawater pushing groundwater up, Bortman said. She cites persistent, everyday flooding along the South Shore in some cases and twice-a-month anxiety of whether a road is going to flood linked to the tides.

"Is the school bus going to be able to come down this road?"

"And then there are the more episodic concerns about storms," said Bortman, who lived through a hurricane in the Caribbean many years ago. "It leaves you with anxiety."

Her home is within walking distance of Huntington Harbor, but 75 feet above sea level. She chose to live somewhere that's not in a floodplain.

Bortman is the climate adaptation director of the New York division of The Nature Conservancy. She says one immediate solution to reducing anxiety and taking action is the $3 billion environmental bond act, proposed by Gov. Andrew M. Cuomo and passed in the New York State budget. It goes before voters in November.

"Nature is really our best defense for climate change," she said. "If we protect and restore natural barriers," such as wetlands, dunes and coastal forests, "they will protect us," Bortman said.

"Long Islanders know that the threat is real. I think the anxiety level has dropped a little bit as a result of not having another Sandy since 2012," she said.

"Although I don't think that's the case for people who live along areas where flooding is a regular occurrence."

THE SANDBARS 'WEREN'T THERE'

Chenae Bullock said although she doesn't feel climate anxiety, she had a moment when climate change became real for her.

"All my life my mom has always been a swimmer in the ocean, and in the bay," said Bullock, 32, who is a member of the Shinnecock Indian Nation and an African American.

Bullock, who is the CEO of Moshketu Consulting, a cultural heritage and preservation firm, learned to swim by holding onto her mom's back. "She would swim really, really far in the Shinnecock Bay." Her mother knew where all the sandbars were.

But one day, when Bullock came back to the reservation as a teenager, her mother "tried to swim out to those sandbars and they weren't there."

"You talk about causing anxiety.”

"Climate change is not going away," she said, adding: "We just have to start handling our anxiety the best we can, and that's going to be together."

'ARE WE ALLOWED TO ENJOY WARM WEATHER' IN WINTER?

"My mental health felt stunted in the face of the gloomy reality of our future, my future," Jessica Morgan said, describing her experience with climate anxiety two summers ago.

So the social worker turned to something that was familiar for help.

"Being a therapist myself, I thought, 'Oh, I should see a therapist,'" said Morgan, 32, who lives in Sound Beach. She wasn't even sure that counseling about climate was a thing — "so it was really kind of a new experience that I was unsure of."

Her therapist welcomed a lot of her anxieties. And she decided to take action and become part of the climate movement, volunteering with the Long Island Progressive Coalition.

"I went to Albany. I laid down in front of Gov. Cuomo's office willing to be arrested in a civil disobedience action," Morgan said, laughing.

She said in her age bracket people are just starting to have kids and buy homes — "long-term commitments that force you to look at the future."

"Can we protect our kids? Can we maintain our homes? Those are real conversations that we're having in our circles," she said.

She lives on the North Shore. In her lifetime, she has seen erosion of the beaches — "and noticeable sea level rise, which is really concerning."

"I'm 32 years old, and even for me, something that saddens me is winter, and how winter has changed in my lifetime," Morgan said.

"I was someone who never enjoyed winter, I never liked winter, but now that we're having noticeably warmer winters, that's a clear trigger for my climate anxiety," she continued.

Morgan says her climate activism makes her feel invigorated, humble and connected. "People are still showing up for the planet and for each other, which is super hopeful. It makes me really hopeful."

"With any type of mental health issue like anxiety, you're not alone, and when you isolate, it becomes worse," Morgan said. "And it really parallels the climate crisis.

"Each of us isolating in fear is not going to solve the problems."

'Field Guide to Climate Anxiety' author: Generation Z's norm will 'be a sense of instability'Sarah Jaquette Ray on what the "climate generation" faces, what the coronavirus pandemic is revealing and why eco-guilt is not helpful.