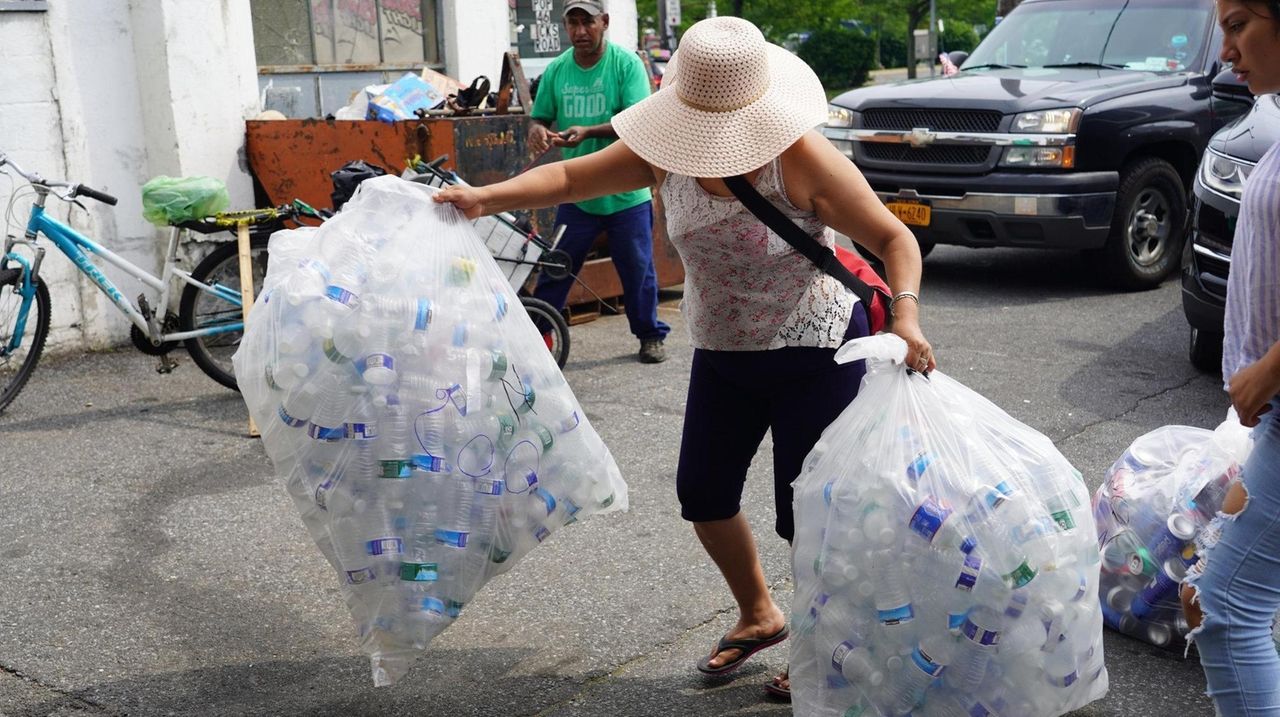 Assemb. Steven Englebright (D-Setauket) speaks about the impact of the COVID-19 pandemic on environmental initiatives in the state, including the ban on plastic shopping bags and critical issues like climate change. Credit: Newsday / John Paraskevas

Environmental initiatives are among the lesser-noted casualties of the COVID-19 pandemic, but some are losing ground temporarily and some may be altered for the foreseeable future.

A court-ordered delay in enforcing the state’s new ban on plastic shopping bags was prolonged when the court system, operating remotely, set aside all but essential cases. Some stores had refused to accept bottles for redemption, and recycling was suspended in some localities.

One of Long Island’s major recycling processors is still rejecting loads contaminated with garbage after COVID-19 infections spiked among its employees, forcing it to adopt less labor-intensive measures to keep workers safe.

And while the state Department of Environmental Conservation is responding to emergencies, it is performing investigations and inspections on "a case-by-case basis" and rescheduling inspections.

The state’s ban on single-use plastic bags took effect March 1, but its enforcement was delayed by a court order to allow time for a lawsuit against it to progress — and was delayed further when the courts began working remotely and only on essential cases. Enforcement was suspended until today, but with an additional 30 days added on to allow notification, according to a DEC statement. Oral arguments in the case are set for Thursday via remote hearings.

The plaintiffs amended the suit to include a claim about the potential for bacterial contamination on reusable bags, a claim environmentalists dispute.

"We spent five years working to change public behavior to bring our own bags, and this is being undermined by junk science," said Adrienne Esposito, executive director of the Farmingdale-based Citizens Campaign for the Environment.

In a statement, the DEC said it "continues to encourage New Yorkers to transition to reusable bags whenever and wherever they shop and to use common-sense precautions to keep their reusable bags clean.”

While stores may not ban reusable bags, they can require shoppers who use them to bag their own groceries. Many stores are already complying with the plastic ban, according to the DEC. However, Judith Enck, president of Beyond Plastics and a former regional EPA administrator, said her group had asked members to report noncompliance, and "in five days we got 100 responses from all over the state documenting that stores are still handing out plastic bags."

The DEC also has told stores they may no longer refuse to accept bottles for redemptions, although it is still getting complaints from New York City and Long Island about stores not accepting them.

Meanwhile, the agency said it is continuing to respond to emergencies such as spills and chemical releases, while conducting required inspections and investigations “on a case-by-case basis.” Some inspections are being rescheduled “if appropriate social distancing protocols cannot be followed.” Those seeking to delay compliance with regulations must document problems doing so “with a reasonably direct connection to the COVID-19 emergency.”

Anthony E. Core, president of Omni Recycling in Westbury, said his company’s operation was revamped after employees were sickened with COVID-19 at a rate higher than the infection rate in Nassau County. He declined to cite the number. Now, the company will accept only loads largely free of garbage so that, instead of many workers standing close together on a line plucking recyclable objects from the garbage, fewer masked and gloved workers can stand 6 feet apart.

“Late in March, we started rejecting towns that had highly contaminated recyclables,” Core said. “Let’s just ship it to the landfill where garbage belongs and is properly disposed of rather than exposing workers to it.

A related family owned company, Westbury Paper Stock, was sued months ago by the Town of Hempstead, Core said, because it sought to end its contract to process recyclables that it said were overly contaminated by garbage.

The focus on the pandemic’s human and economic toll has slowed momentum to fight what some environmentalists consider the most urgent threat of all: climate change.

“All of the attention on the environment has suddenly been riveted just on the human health impacts, which have been terrible, of a pandemic,” said Assemb. Steven Englebright (D-Setauket), who chairs the Assembly’s Environmental Conservation Committee.

He decried the “loss of focus” on long-term impacts of climate change with rising ocean temperatures, intensifying storms, and the spread of new infectious diseases.

Newly appointed members of a citizens advisory council — part of a state initiative to boost green initiatives to combat climate change — were able to meet only once this year, due to the pandemic, while some state operations were slowed if not “paralyzed,” Englebright said.

“We have to deal with the virus and we have to keep our eye on the horizon," he said, "and realize the global ecosystem must be preserved if we’re to maintain optimism for our children and the future.”