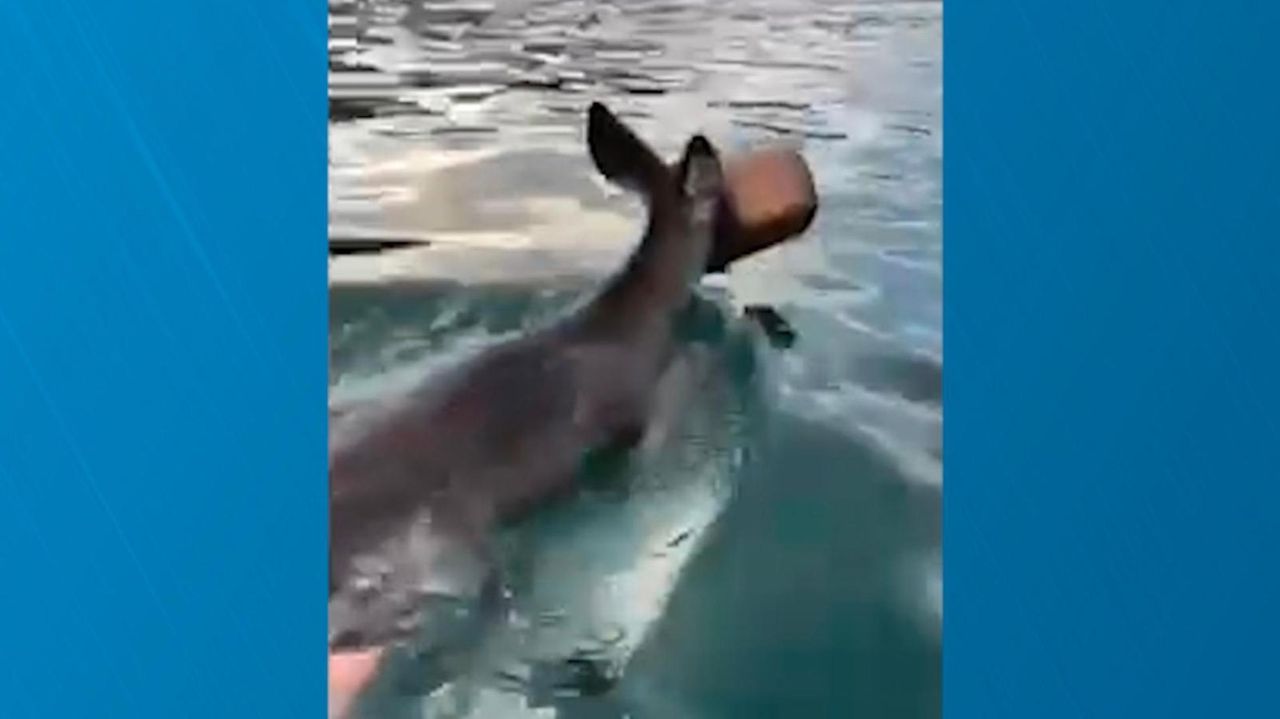 A swing and a miss and then a calm "I got it," says the man lying on the prow of an eight-foot motor boat who has just pulled a paint bucket off the head of a deer swimming in the Long Island Sound on Saturday.

The doe, likely a yearling, dives under the boat. When it reappears, possibly still traumatized by first being blinded by the paint bucket before apparently tumbling down a 75-foot bluff and ending up in the cold water, the deer does not at once head for the Port Jefferson shore, a video shows.

So her two rescuers, Frankie Floridia, president, Strong Island Animal Rescue of Port Jefferson Station, and the man at the helm, known only as Pat, again slowly approach the deer as she struggles to swim away from them.

Once again, Floridia at the bow reaches down into the water, clasps the deer in what he calls a bear hug by the chest, and the duo slowly and gently return her to land.

"She should be able to stand now," Pat advises, according to the video. "Beautiful!" Floridia exclaims. "OK, I’m going to let her go," he continues, and the deer scrabbles to her feet and races off, back up the bluff, where her rescuers, driving around to check on her, will spot her munching grass 10 or 15 minutes later.

Not a rare sort of rescue, hungry, thirsty or just curious creatures get their heads trapped in jars, buckets and other containers. And if no one frees them, they may be doomed, unable to see, drink or eat.

Just three years ago, Floridia swam out in Port Jefferson Harbor to rescue a fawn that first was brought back to land by a 6-year-old golden retriever named Storm, but then possibly panicked and ran right back into the warm July water.

The Long Island Sound now is about 55 degrees, according to weather.com.

The saga began when an alert homeowner spotted the deer with the orange bucket covering her head by the bluffs.

Floridia got the call and says he "geared up," donning waterproof, rip-proof, bite-proof pants, and raced out in seven to eight minutes — only to find the deer had vanished from sight when he arrived.

"I looked down the bluff and I couldn’t see her," he said by telephone. "I happened to look out at the view, and there she was, swimming in circles."

He said, "I immediately slid down the bluff like a little kid."

And then he swam out — only to realize when chest-deep and about 50 feet from the deer that the water was so cold that it was making it hard to breathe.

Retreating, Florida spotted a nearby motorboat and called out an "SOS" that Pat answered.

Floridia, who made sure he and Pat retrieved the paint bucket before it endangered another creature, recounted other times he and his 10-person team have saved deer and raccoons from various plights, caught in fences or with containers stuck on their heads, and kittens trapped in storm drains.