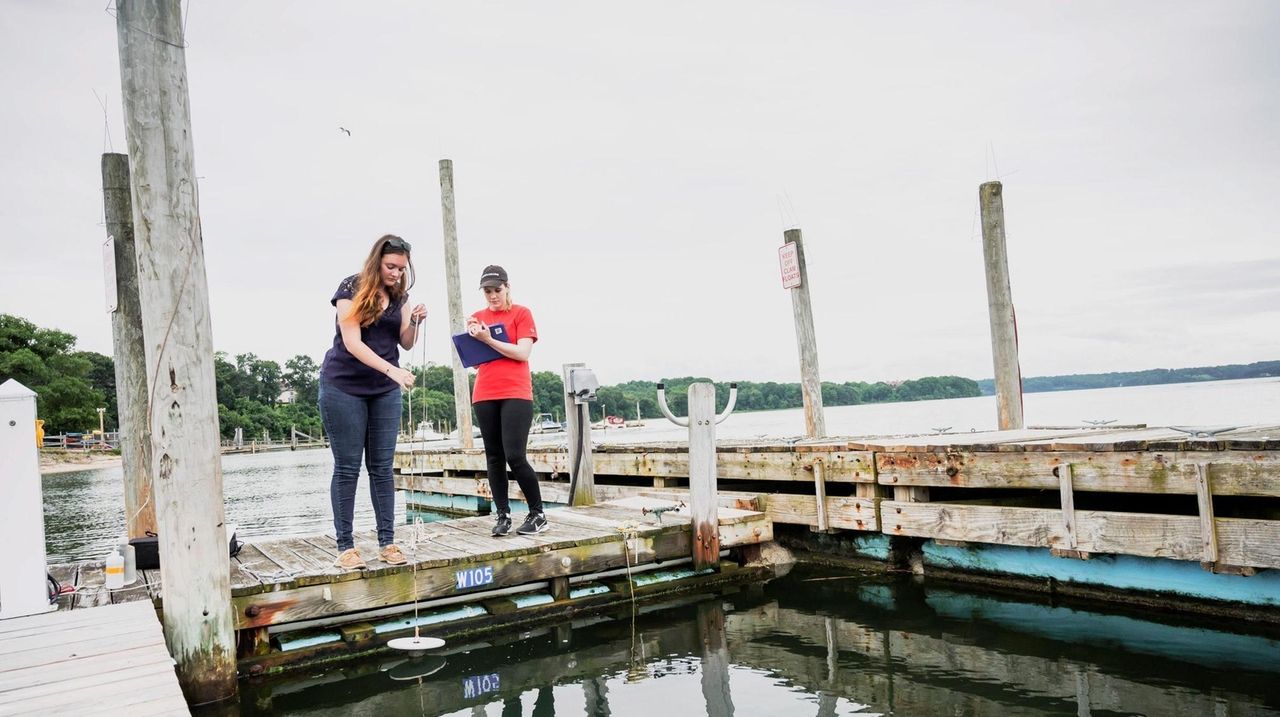 When it comes to water quality, it’s mostly thumbs up for Long Island bays, harbors, rivers and inlets just in time for the first official day of summer.

“Water quality is largely good across much of Long Island,” said Chris Gobler, professor of marine science at Stony Brook University and director of the New York State Center for Clean Water Technology.

Gobler bases that assessment on the findings of his Long Island Water Quality Report, a weekly score card issued from Memorial Day to Labor Day by him and his team of more than 20 students and scientists.

Newsday plans to share the results each week through the summer on its app and on Newsday.com.

Out of 29 shore locations sampled Monday, 16 got “good” ratings, meaning clear water, no or low levels of algae and/or bacteria from human or animal waste, and hospitable conditions for fish and shellfish.

Still, two spots were tagged as poor — the Forge River and Peconic River, both with reduced water clarity, low levels of oxygen and high levels of fecal bacteria. Also high were levels of algal bloom in the Peconic. Harmful algal bloom levels were found for the Forge.

The prime driver of the project is to provide regular snapshots of ecosystem health, with an eye to how well locations are supporting — or not supporting — robust fishing and shellfishing activity.

While the beach crowd may find some basics useful — water temperature and clarity assessments — this is not the place to go to see what locations are up to snuff for swimming and splashing around. Look, instead, to official calls from county health departments on where to swim or not, Gobler said. And, for any curtailment of shellfishing, the state Department of Environmental Conservation is the go-to official source.

Since the water quality project launched in 2014, the team has picked up on how water quality tends to morph as the summer progresses.

That means we shouldn’t necessarily get too attached to all these good scores so soon in the season, as, over the years, “we've learned that oxygen levels are high and good in June, but declined through July and August, sometimes to levels dangerously low for marine life,” Gobler said.

Three factors are at play, he said. As waters warm up, we get “the cumulative growth of algae over the summer,” warmer water holds less oxygen, and shorter days mean less of it is produced, Gobler said.

A native of Port Jefferson, Gobler is well acquainted with the Long Island coastal scene — boating on the North Shore with his father, enjoying ocean beaches and fishing out east, he said.

He has a distinct memory from the late 1980s, hearing of “the plight of the baymen and the collapse of the hard clam fishery.” That’s as “something called the brown tide had come in and just decimated that entire fishery.” He found it “shocking that a whole way of life on Long Island may have been lost.”

When it came time to choose the focus for his graduate studies, he went with marine science, looking for an answer to: “Why is the water getting so bad that we’re losing this major fishery?”

Over the past five years, 2014’s water quality could be deemed best, thanks to a cooler summer, he said. Warmer conditions prevailed in 2015, 2016 and 2018, which saw fish kills and toxic algae.

Sampling is done on Mondays, as six teams “fan out across Long Island, collecting water samples, making measurements, and downloading data from logging devices, like oxygen meters,” he said. During Monday’s sampling in Stony Brook, he pointed to one device that sits in the water all week, taking temperature and oxygen measurements every 15 minutes.

From all that, the good, fair and poor scores are determined.

For Samantha Mislinski, marine science major from Boulder, Colorado, the day out sampling was an eye opener on the effort put into collecting data. Her experience has been primarily on the other end, in the lab processing it all. Having lived on Oahu, Hawaii, for four years as a child, water quality has always been of high interest, she said.