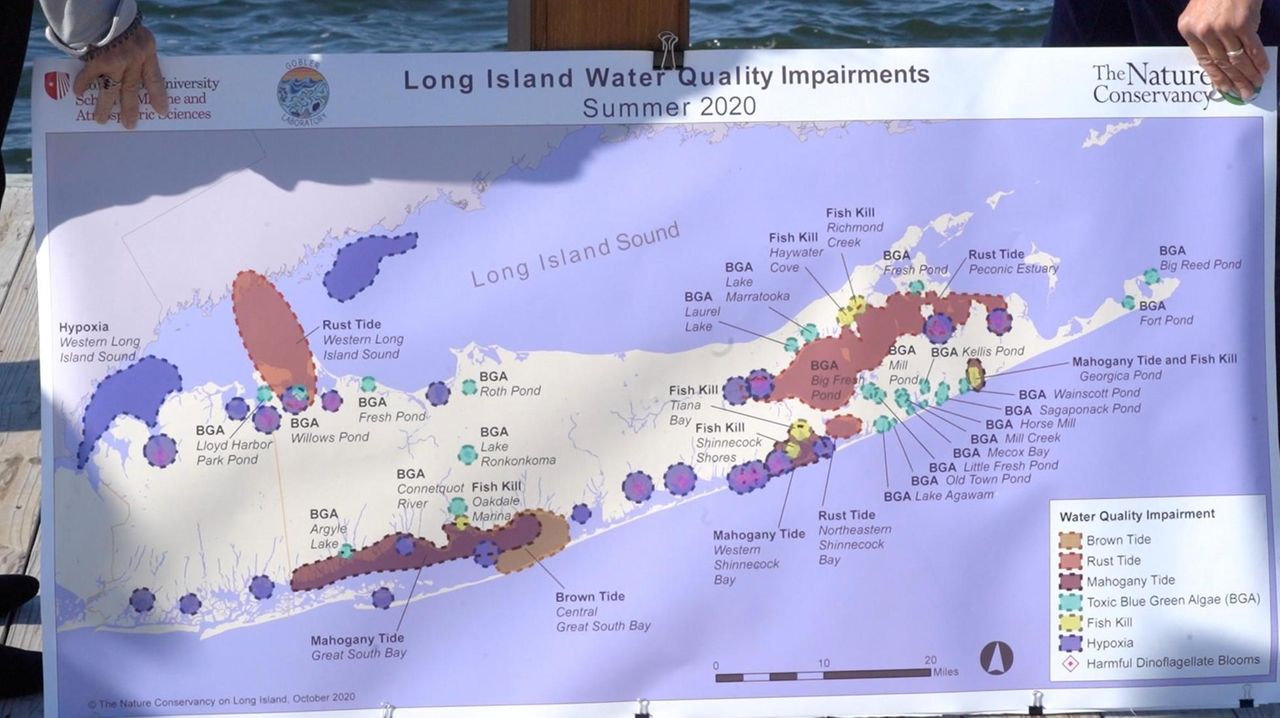 On Wednesday, Chris Gobler, a Stony Brook University professor, released his annual 2020 Assessment of Water Quality Impairments for Long Island, in which he says the water quality is not meeting all the standards. Credit: Randee Daddona

Every major bay and estuary on Long Island, from Great Neck to East Hampton, was afflicted this summer with toxic algae blooms or oxygen starved waters, primarily from heavy loads of nitrogen stemming from sewage and septic systems, according to a new report on the region's water quality impairments.

"The water quality was not good," said Chris Gobler, a professor of coastal ecology and conservation at Stony Brook University and the report's author at a news conference Wednesday in Patchogue. "Our waters are not meeting… standards and not making the grade."

The annual "Assessment of Water Quality Impairments for Long Island," report paints a dire picture of the challenges facing the region's waterways, including toxic tides, dangerous algae blooms and fish and turtle kills.

In June, Gobler said, scientists discovered "mahogany and brown tides" on the South Shore and East End that are harmful to marine life. The following month, those blooms were replaced by "rust tides" — an algae that kills fish — which were found in East Hampton, Riverhead, Shinnecock Bay and the Long Island Sound, the report found.

A record 24 lakes, ponds, rivers and other freshwater bodies in Nassau and Suffolk were also afflicted with toxic blue-green algae blooms that are harmful to aquatic life and are responsible for illnesses and deaths of several dogs, according to the report.

For the past five years, Suffolk has had more lakes with blue-green algae blooms than any county in the state, a distinction that it will likely keep in 2020, Gobler said.

And more than two dozen sites across the island were labeled as "dead zones" with oxygen levels below the standards set by the State Department of Environmental Conservation, the report said. In a half dozen cases across the Great South Bay, Shinnecock Bay and the Peconic Estuary, the depleted oxygen levels led to fish kills.

Virtually all of the water impairments are driven by rising nitrogen levels stemming from household sewage, activists said.

Adrienne Esposito, executive director of Citizens Campaign for the Environment, said this "potpourri of toxic tide soup" will continue to be Long Island's future unless reforms are made to the region's sewage systems.

"We need to replace our old septics and cesspools with the new modern integrative alternatives that treat for nitrogen," she said. "We need to upgrade sewage treatment plants. And we need to protect our groundwater and our bays because they are connected."

Bob DeLuca, President of Group for the East End, an environmental conservation organization, said the region's economy, from fishing to tourism, depends on the health of its waters.

"The quality of that water," he said, "is the gold that fuels our local economy."

2:20
Governor extends mask mandate for indoor public places to Feb. 10
3:06
Thousands gather to honor slain NYPD Officer Jason Rivera, a 'hero' who wanted to make a difference
3:10
Forecast: At least a foot of snow expected over much of LI
Two LI nurses accused of faking COVID-19 vaccination cards
Oyster Bay's computer outage prompts state review of town's IT security
1:51
How race is taught in LI schools — and why some educators feel under siege
Didn’t find what you were looking for?