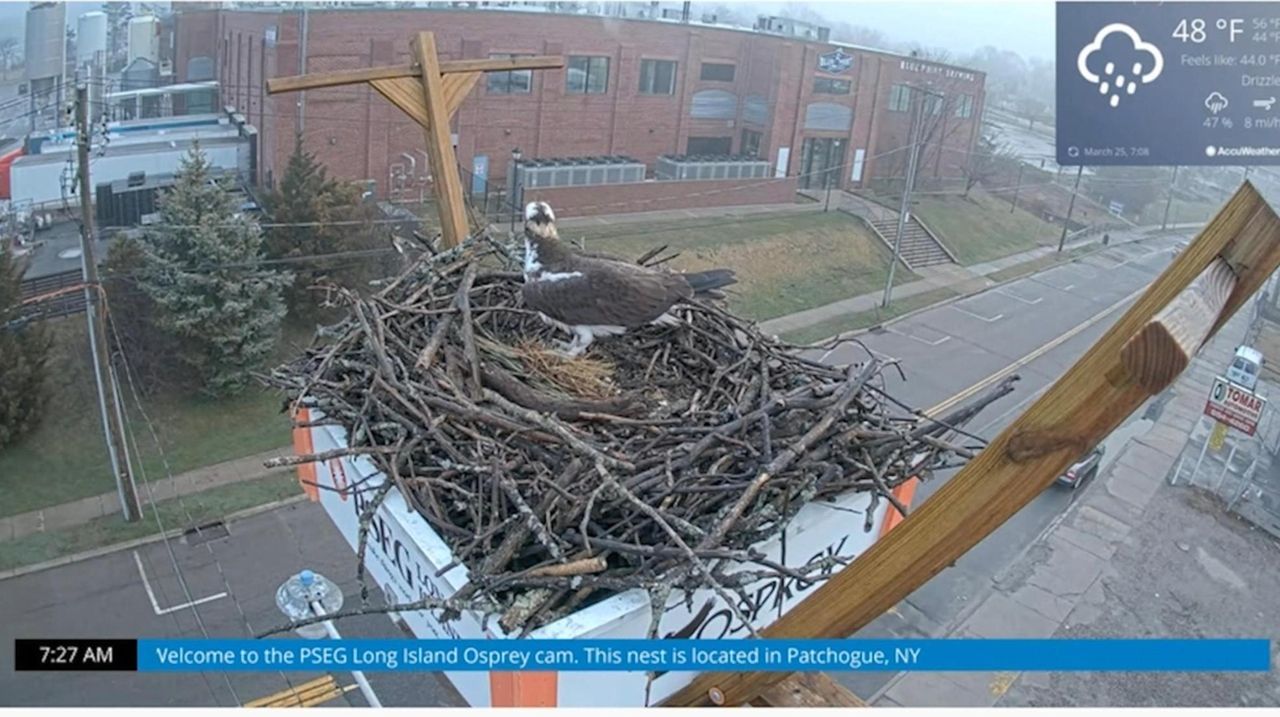 Touch down, spend a couple of minutes surveying the entire area, and then get right to work on home repairs.

The first osprey spotted this spring on a Patchogue webcam displayed that "work comes first attitude," though it probably had just finished an arduous migration.

These fish-eating, roughly three-pound seahawks, which can dive three feet into water for a catch, winter as far south as Latin America.

Apparently, PSEG Long Island’s nest-cleaning program, which removes potentially lethal debris, including fishing line, plastic bags and even bungee cords that all can ensnarl chicks and adults, failed to replace the sticks in the proper crosshatch fashion.

Like a lumberjack in a logrolling contest, the osprey, ignoring the squawking protests of what might have been a starling, also revealed its twig-balancing skills Thursday morning as it made its way around the nest on a platform installed atop one of the utility’s poles.

Ospreys favor these sites, experts say, hypothesizing they resemble the forks between tree branches and trunks or the tops of dead trees ospreys have long sought out.

"Eagles and hawks, they don’t seem to really bother our facilities as much," said Kevin Rodgers, a PSEG Long Island project manager who works with its osprey conservation project.

"That’s somewhat unique to ospreys, that they look at our nice distribution and transmission [lines], and it’s like a builder saying, ‘Hey, it’s a great foundation,’ " Rodgers said.

Eagles and other hawks have been known to take over osprey nests, which can lead to fights — and bald eagles also are known for swooping in and seizing fish just caught by ospreys.

The Patchogue osprey probably is a male; they tend to arrive first, the Cornell Lab of Ornithology says.

It also might be one of the chicks that hatched there last spring, or it may be one of the parents, who then will oust the youngster, Rodgers said.

Ospreys are one of the species that rebounded after the eggshell-thinning DDT pesticide was banned in 1972. That was three years after the number of osprey nests between New York City and Boston sank to 150 from 1,000 or so in the 1940s, the state Department of Environmental Conservation says.

In eastern Long Island, the number of ospreys has leapt 50% in the last seven years, estimated Bob DeLuca, chief executive of the Group for the East End, a Southold-based environmental advocacy organization, though the pandemic has limited its surveys.

"We know that there are roughly 2,000 nests occupied annually across Long Island, with the highest concentration being on the East End, where we generally have about 400-420 active nest sites identified and monitored each nesting season," he said by email.

The DEC now views ospreys as a species of "special concern," a less dire ranking than their previous listings as "threatened" and "endangered."

Yet the perils of nesting on top of utility poles — or $30,000 switches — are considerable, especially for ospreys because their four- to five-foot wingspan can brush live wires.

"When they get a nice, wet fish up there, it’s good for them; it’s not good for electricity," Rodgers said.

" We’ve seen examples where they started a fire, the top of a pole burned off," he said, "and the first notification we get is customer outages."

The DEC, which sets strict guidelines PSEG Long Island must follow, has let it move about 2½ dozen nests in the past couple of years, Rodgers said.

But sometimes the utility has to wait; disturbing a breeding pair might cause them to abandon the nest.To persuade the DEC to approve moving a nest, Rodgers said: "We’d have to say ‘Look, these guys are going to actually fry if we don’t do something,’ and there are times we have successfully prayed that we managed to get through a season because we couldn’t get permission to touch it."

Ospreys usually lay their eggs in April or May; they hatch about a month later and chicks start trying to fly, or fledge, in about two months.

"Last year was almost perfect," Rodgers said, with all five eggs successfully hatched and fledged at the two webcam sites, one in Patchogue and one in Oyster Bay.

"Maybe God was smiling last year," he said, as "everyone hatched, everyone got fed, and everyone flew away."