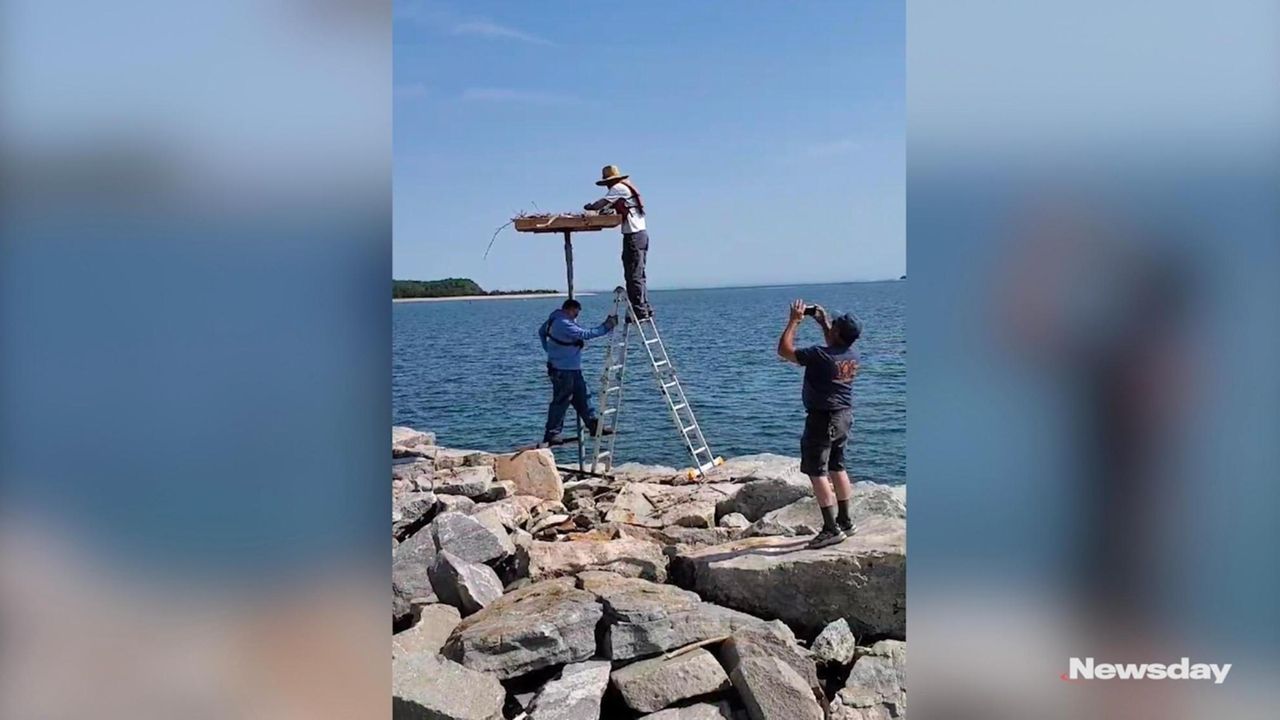 On Thursday, a small team from the DEC successfully relocated a pair of ospreys and their egg to a safer location at the Huntington Lighthouse. The ospreys had set up camp on the lighthouse's entrance dock, but officials, concerned that the birds would be exposed to curious boaters and animal predators, constructed a new home for them in a new location. Credit: Huntington Lighthouse Preservation Society

Ospreys may be flourishing on Long Island but these fish-eating sea hawks still can use some help, as the plight of five possibly abandoned eggs and the latest nest relocation demonstrate.

The Patchogue pair that arrived in late March after wintering in warmer climes evidently abandoned the platform PSEG Long Island built — with a webcam — leaving three eggs behind, which then were eaten by crows, said Jim Jones, naturalist, Bethpage State Park, by telephone.

In Huntington, however, an osprey nest and its one egg were successfully moved from the front of the lighthouse in the bay, where it was too close to the entrance — possibly a rookie mistake. The nest now sits on top of an 8-foot pole drilled into the granite foundation, according to the Huntington Lighthouse Preservation Society, a nonprofit.

"This could be their first nest," Chip Hamilton, state Department of Environmental Conservation senior wildlife biologist on Long Island, said in a statement. "They are just trying to figure out life, and thought this could be as good a location as any."

Once the DEC decreed the nest had to be moved, Frank Scobbo of Scobbo Contractors and Paul Kaiser of Kaiser Marine volunteered their time and the materials, said lighthouse president Pam Setchell. "They literally dropped everything to get the platform built." The DEC handled the nest.

In Patchogue, the experts, hoping the parents would return, held off on sending the eggs to be analyzed for any contaminants, Jones said, explaining that is how scientists discovered decades ago that DDT was fatally weakening the shells of eagles and other raptors.

"We were hemming and hawing about making the right decision; then the crows, being opportunists, started to peck and eat at the eggs."

Now, there is another pair of osprey eggs in the very same nest — which may or may not have been abandoned. The web cam showed that at least one osprey was visiting the nest from time to time this week.

Ospreys, along with other birds, often wait until they have laid all their eggs before they start incubating them, Hamilton said.

"And they don’t sit the whole time," he said. "They are monitoring the temperature of the eggs; that is their goal," he said, so the birds sometimes will stand beside the eggs or shade them from the sun on a hot day. "In cold, or rainy weather, they will sit on them."

Without scrutinizing all the web cam video, it is impossible to say whether the second set of eggs was laid by a different couple, but Hamilton said that is likely as ospreys only lay one clutch per season.

The first pair might have been scared off by people or predators; or, one of them may have been killed, and the other, unable to feed both itself and care for the eggs, did what wildlife does — preserved its own life and flew off, the experts said.

Ospreys are one of the species that recovered after the DDT pesticide was banned in 1972. That was three years after the number of osprey nests between New York City and Boston sank to 150 from 1,000 or so in the 1940s, the DEC says.

The DEC lists them as a species of "special concern," a less grave ranking than their previous listings as "threatened" and "endangered."

Long Island has around 2,000 or so nests occupied by ospreys. Suitable spots have grown scarce, Hamilton said, so some are settling in hazardous sites. Homeowners wishing to help out by building platforms should consult the experts, he advised.

And "Ospreys are loud; they are very messy; there are a lot of droppings," he cautioned.

So far, the Huntington pair — and one in Oyster Bay that also has a PSEG webcam — seem to be doing just fine. "We’ve been monitoring the new nest from afar, and we are thrilled to report that the ospreys are in residence," said Setchell.

Said PSEG Long Island spokesman Jeremy Walsh: "The Oyster Bay nest continues to host an osprey pair that are sitting on their eggs."