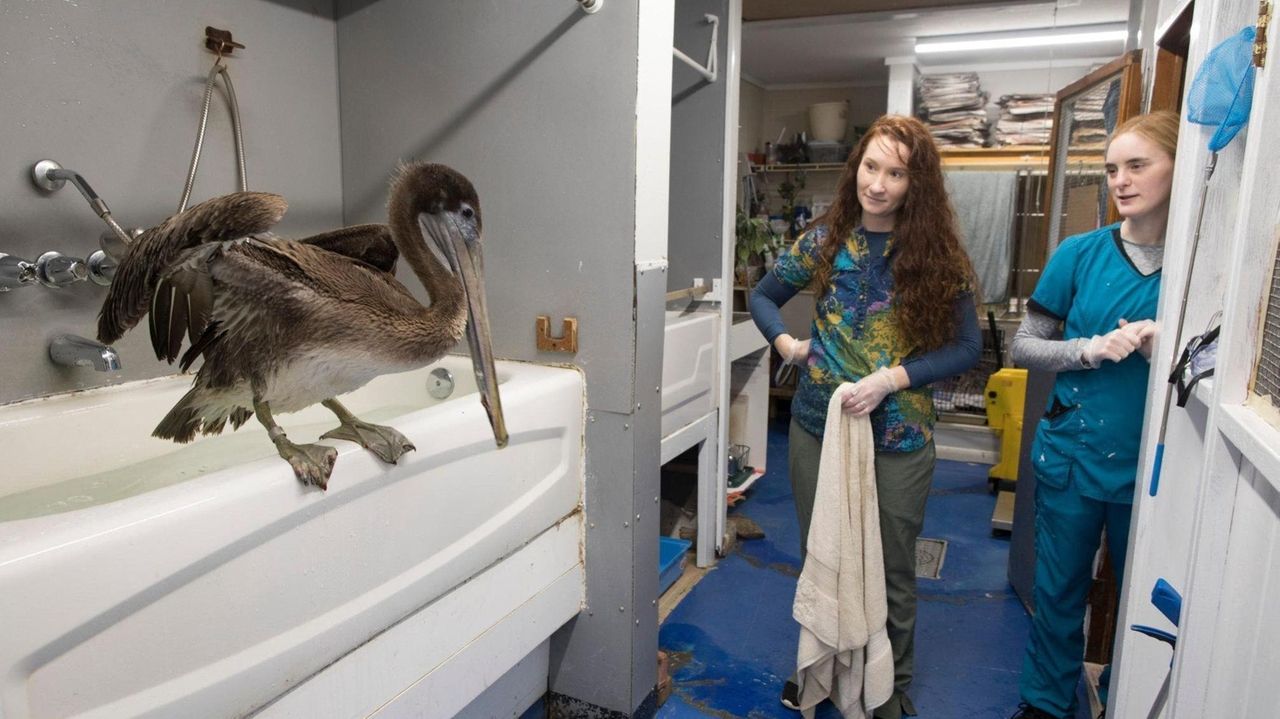 Two young brown pelicans that should've headed south by now are being treated at a Hampton Bays wildlife center, thanks to local fishermen who recognized their plight, as seen here on Tuesday. Credit: Newsday / Chris Ware

Two young brown pelicans, some of nature's most spectacular divers that should've headed south by now, are being treated at a Hampton Bays wildlife center thanks to local fishermen who recognized their plight.

The duo — both banded on July 19 in North Carolina when they likely were just a month or so old — were spotted weeks ago in Montauk, when they seemed to be doing just fine, as the fish were plentiful and the weather mild, said Amanda Daley, office manager and hotline operator at Evelyn Alexander Wildlife Rescue Center.

However, winter's blast caught them off guard, and the fishermen who had been feeding them saw their decline and caught one Dec. 3 and the second a day later, Daley said.

"Certainly, wind patterns could have helped them move up the coast, versus down the coast," said Scott Johnston, of U.S. Fish & Wildlife Service's branch of migratory birds, in Hadley, Massachusetts. "The fact is, they are young enough they don't exactly know where to go; they might have found a beautiful food source; then, when it got really cold, they didn't know what to do."

One of the birds, being treated with antibiotics for a respiratory infection, is swimming in a closed-off, outside saltwater pen under heat lamps. The other, suffering from frostbite on a foot and the bill, is indoors, getting regular baths with Epsom salts in a tub after being caught with a towel.

The two pelicans are among the 60 or so patients and residents — opposums to hawks — at the center.

Brown pelicans, the smallest of the seven species, can range as far north as New York and British Columbia, though they nest from Maryland to Venezuela and from California to Ecuador,  according to the Cornell Lab of Orinthology, a nonprofit that is part of the Ithaca-based university family.

Unlike most other pelicans, which herd small fish toward the shore by forming a line on the surface of the water and flapping their wings, brown pelicans catch the prey they spot from the air by diving — from as high as 65 to 70 feet, experts said.

When they hit the sea, their distinctive throat pouch opens and fills with around 2-1/2 gallons of water as they scoop up fish, typically menhaden, mullet, anchovies, herring, and sailfin mollies, according to the Cornell Lab. By slowly closing their pouch, they expel the water before swallowing.

Once they reach adulthood, brown pelicans can stand nearly 5 feet tall, with wingspans that top 7 feet, though they only might weigh 10 pounds, according to th U.S. Fish & Wildlife Service. They do not begin to breed until 3 to 5 years old and can live three decades, experts said.

Pelicans almost went extinct due to shell-weakening DDT and the pesticide endrin, which killed them outright, according to the Cornell Lab. The United States banned DDT in 1972 and curbed the use of endrin in the mid-1980s. Along with many other species, lost fishing gear and the destruction of their coastline habitat — from development to oil spills — now threaten their future.

Hearing one pelican's distressed breathing, and observing bill and eye inflammation, the nonprofit wildlife center sent photographs to a Florida vet who assured them these infections were not uncommon and would respond to antibiotics.

The pelican with frostbite might need surgery to repair the wound to his pouch, said Daley, who hopes a veterinarian swiftly provides a certificate of inspection needed to ship the pair to a Florida rehabilitation center.  "The skin is very stretchy so he will be able to heal normally," she said.

The pelican that must be kept inside because of its frostbite is standing longer than it would in the wild, which heightens the risk of developing "bumble foot" or foot infections, Daley explained. And the one now swimming outside would benefit from being in a larger enclosure at a more specialized facility.

"We're looking to transfer them; obviously it is in their best interest," Daley said.

Confining them also can lead to feather damage, delaying their release.

Though the local fishermen were able to feed them rather easily, even by hand, that was when they were in the wild, Daley said. Neither is particularly happy about being a captive, so the center minimizes their stress, handling them only when necessary and as quickly as possible.

"They are not particularly friendly," she said, adding, "I don't blame them."

The Hampton Bays wildlife center said it is trying to find a volunteer to fly the pair south. Otherwise, Daley said, it could be a Delta cargo flight out of a local airport.