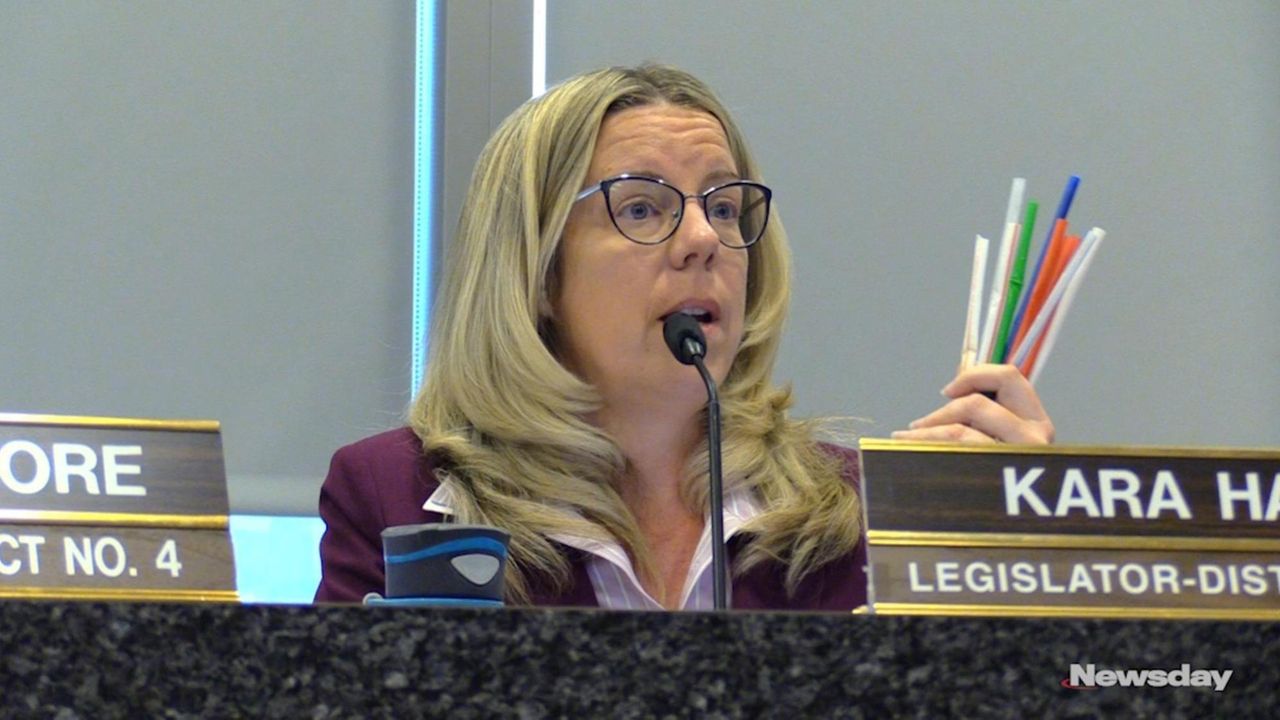 On Tuesday, Suffolk Legis. Kara Hahn (D-Setauket) addressed the county legislature to push legislation that would ban the use of plastic straws.  Credit: James Carbone

Suffolk County lawmakers passed bills Tuesday to crack down on the use of polystyrene and plastic straws to combat plastic pollution, spelling the end of days of getting a Styrofoam cup of coffee and plastic straw in a Slurpee.

Straws and stirrers would be by-request-only in sit-down restaurants and would have to be biodegradable — not plastic — in food establishments and self-service beverage stations starting Jan. 1 under a bill passed by the Suffolk Legislature. For consumers with a disability or medical condition, plastic straws would be available on request for consumers.

A separate bill that also passed would ban restaurants from using polystyrene foam takeout containers — commonly referred to under the brand name Styrofoam — and polystyrene packaging "peanuts" starting next year as well.

"This is sweeping legislation to begin weeding out single-use plastics," said Legis. Kara Hahn (D-Setauket), the lead sponsor of the bills.

The bills would have to be signed by County Executive Steve Bellone before they become law. County spokeswoman Marykate Guilfoyle said the administration is reviewing the legislation. Hahn said she believed he would sign them, citing the overwhelming support from lawmakers.

Legislators also passed a law that will ban the sale of single-use plastics at county parks and beaches, including plastic utensils, plates and cups. It would go into effect when current park vendor contracts are up.

The three bills passed the Legislature without an opposing vote, although one lawmaker abstained from the proposed straw law because, he said, they're a necessity for parents of little kids going out to eat.

"I don’t think it’s giving all of us with little kids all the options we need to go out to eat without our kids spilling soda all over themselves," Legis. Rob Calarco (D-Patchogue) said.

Hahn responded that there are plenty of biodegradable options for straws — made out of paper, bamboo and other plant material, and businesses are developing more to meet the demand as more municipalities pass laws.

"There are so many options out there that are biodegradable and compostable," Hahn said. "For far too long, we’ve been putting off" environmental legislation because of cost.

The bill does include a juice box exemption, meaning drinks that come with a prepackaged plastic straw attached would be allowed.

Legis. Kevin McCaffrey (R-Lindenhurst) said he had been skeptical of straw bans, but saw businesses adapt in places where they took place. He said one restaurant in his district is using all sustainable products.

While the goods cost more than the plastic and Styrofoam — McCaffrey said the restaurant owner said biodegradable straws cost 10 times more than plastic ones — it's worth it for environmental reasons. "We can all figure out a way to do it, if the effect on the environment is a good one," McCaffrey said.

The bill would exempt drive-through restaurants from the requirement that customers have to ask for a straw, but the straws they provide would have to be biodegradable.

Environmentalists and legislators across the country have targeted plastic straws and other disposable plastics for littering beaches, polluting waterways, getting ingested by marine life and breaking down into tiny plastic pellets that make their way into the food chain.

Straws "are a growing emblem of plastic pollution," Jordan Christensen, program coordinator for Citizens Campaign for the Environment, said at the meeting. She said alternatives include paper straws and bamboo straws.

A New York City study on polystyrene found it couldn't be recycled once it was used, she said.

"If you can't recycle it, the only thing we can do is ban it," Christensen said.

Andrew Fasoli, a spokesman for the American Chemistry Council, said a NYC study found it costs businesses twice as much for alternatives to polystyrene packages, which he called “a reliable, efficient and cost-effective package."