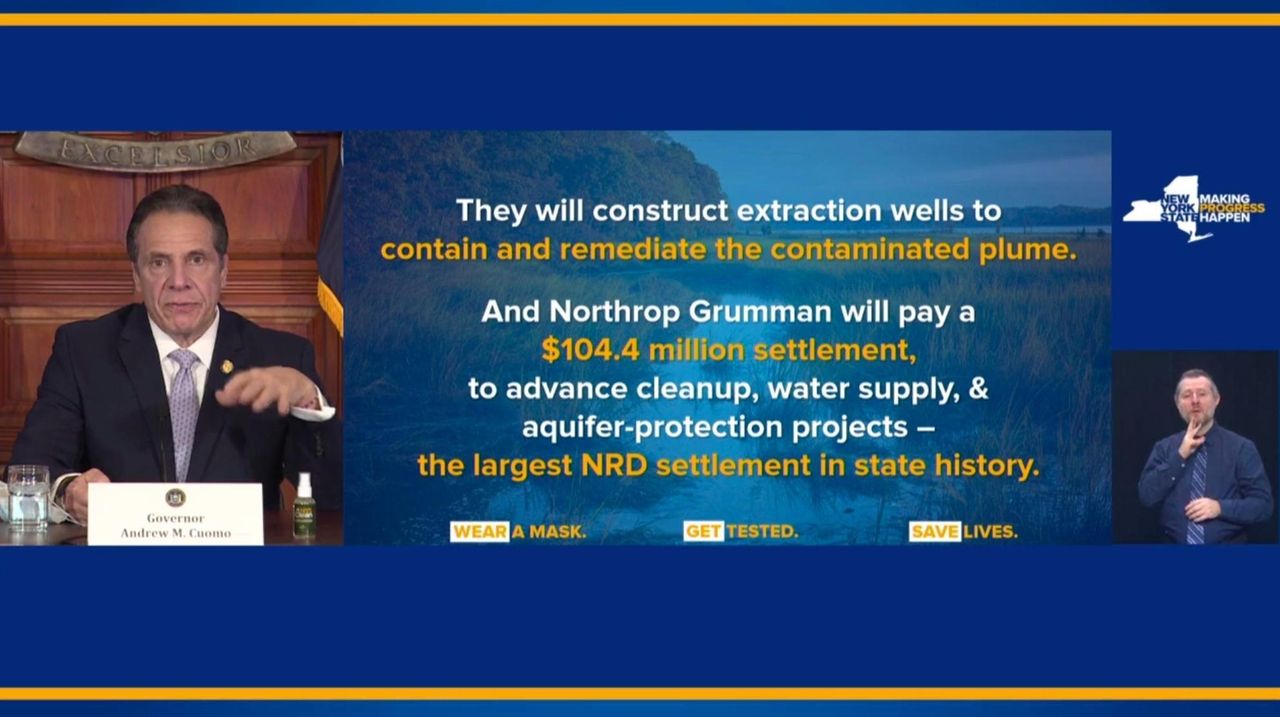 Gov. Andrew M. Cuomo on Monday said Northrop Grumman and the U.S. Navy have agreed on a financial plan to remove the groundwater pollution in Bethpage and surrounding communities. Credit: NY Governor's Office

Northrop Grumman and the U.S. Navy have agreed to a $406 million plan that for the first time would comprehensively stop and remove the Grumman groundwater pollution plaguing Bethpage and surrounding communities, Gov. Andrew M. Cuomo announced Monday.

After more than 40 years denying or downplaying what has become Long Island’s most intractable environmental crisis, the defense contractor, formerly Grumman Aerospace, and the Navy, which owned a portion of the company’s old facility, reached a deal in principle with the state that would install a series of new contaminant extraction wells inside and along the edges of the 4.3-mile-long, 2.1-mile-wide toxic plume.

Northrop Grumman, which long had fought requests to compensate municipalities and water providers, also will pay $104 million in environmental damages, some of which will go toward public drinking water treatment systems. It is the largest environmental settlement in state history, Cuomo said.

"It was a long fight, but it will protect the drinking water for people on Long Island," Cuomo said in his daily news briefing Monday. 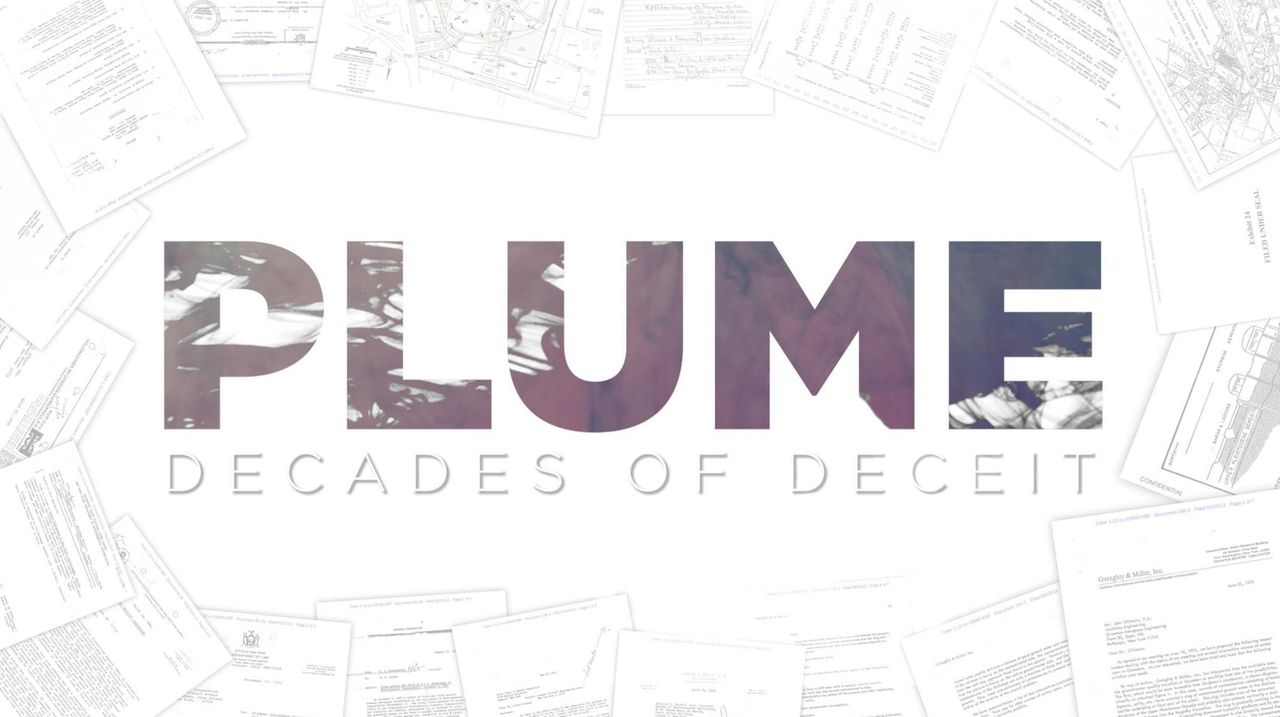 Emmy winner: Plume: Decades of Deceit A story about pollution, secrecy, water and fear: How the Grumman plume has grown into Long Island's biggest environmental crisis.

Work on the series of hydraulic containment wells along the Southern State Parkway — something the state itself once resisted — could begin as soon as January, officials said.

Containing two dozen contaminants, most notably the carcinogenic metal degreaser trichloroethylene, or TCE, the Grumman plume is as much as 900 feet deep in parts of the aquifer. It has forced installation of expensive treatment systems on public drinking water wells and widespread community concern about potential health effects. Officials have tried to reassure the public that the water is safe to drink because it has met state and federal drinking water standards.

Grumman employed more than 20,000 people at its former 600-acre site in Bethpage, where it built World War II fighters and the space module that landed Neil Armstrong and Buzz Aldrin on the moon. The contamination comes from solvents used to clean and degrease parts, additives used to make those solvents last longer and metals used in plating. The Navy owned a portion of the land where Grumman operated.

Newsday published an investigation earlier this year, The Grumman Plume: Decades of Deceit, detailing the history of false and misleading statements, missteps and minimization that aided the pollution’s steady spread. The stories prompted state, federal and local officials to pledge renewed focus on securing the comprehensive measures that were historically brushed off.

As recently as last year, when the state first proposed an aggressive cleanup, Northrop Grumman and the Navy had called the full scope of work infeasible and unnecessary.

A history of the Grumman plume in four parts

But the newly announced agreement has few significant differences from that plan, officials said. The Navy will handle the western side of the plume and Northrop Grumman the eastern. Most notably, the plan includes the new barrier of wells along the borders of the plume to prevent its foot-per-day migration south toward the Great South Bay.

"This historic achievement will result in the cleanup of the largest groundwater plume to ever threaten New York State’s environment and public health," Department of Environmental Conservation Commissioner Basil Seggos said in a statement. "The understanding reached with the polluters launch actions that will constitute one of the largest and most complex groundwater remediation projects in our nation’s history."

Northrop Grumman spokesman Tim Paynter said in a statement that the company was "pleased to have reached an agreement" with the state on "additional environmental remediation measures and other steps the company will take to help implement" the state plan and resolve its damages claims.

"These additional measures are intended to enhance steps already taken to protect public health and provide further support to the water districts," Paynter said. "As we have done for over 25 years, Northrop Grumman will continue to work closely with the state, the U.S. Navy and other stakeholders to implement the additional measures based on scientifically sound remedial strategies. The agreement reaffirms Northrop Grumman’s long-standing commitment to the ongoing collective efforts for the further protection of the Bethpage community."

Grumman knew its toxic chemicals were polluting groundwater. It kept the facts secret.

A Navy spokeswoman said the Navy was committed to additional commitments, largely matching those requested by the state, that it announced last month in a meeting with community residents.

The state in 2019 had selected a plan estimated to cost $585 million, including construction and operations and maintenance over 30 years. At the time, state officials vowed the state would do the work and seek to recover the costs in court from the Navy and Northrop Grumman if they did not agree to the plan.

The new plan is tabbed at $406 million over 30 years, which will be almost fully paid for by the Navy and Northrop Grumman. The state will look for other potential polluters for a western portion of the groundwater pollution plume, and said it would fund that cleanup if necessary. Officials attributed the reduced estimate to Northrop Grumman and the Navy using some of their own land for treatment systems, instead of a centralized treatment plant, and because a handful of remediation wells in the initial plan won’t be put online unless testing shows they’re necessary.

But they said the plan remains protective of Bethpage and surrounding communities.

"We’re committed to the same end result — ensuring the full containment of the plume and protecting Long Island’s sole source aquifer." Seggos said in a statement.

Michael Boufis, superintendent of Bethpage Water District, which for decades battled Northrop Grumman, the Navy and even the state, agreed. "I still think the plan is protective of public health," he said.

Boufis called the agreements "probably the best news we’ve heard in a very long time, and something that’s long overdue. We’ve been trying to hold them accountable for the plume and the pollution for decades." He added the water district would continue its own negotiations with Northrop Grumman and the Navy to recover their full costs to treat water and eventually move their wells outside the plume.

Northrop Grumman’s record $104 million in payments for environmental damages will be made under a legal mechanism known as a Natural Resources Damage assessment. The money includes $41 million for remedial work included in the $406 million cost estimate; $28.5 million for Bethpage and South Farmingdale Water District well protection and water supply projects; and establishing a $35 million fund the state will use for water projects associated with the plume.

While Northrop Grumman said it has spent more than $200 million in Bethpage since the 1990s, including on a long-running system of wells to capture additional contaminants from leaving the boundaries of its original property, on numerous instances it successfully avoided paying for measures that taxpayers ended up incurring.

In the mid-2000s, the Town of Oyster Bay sued Northrop Grumman to recover $22 million it spent to excavate contaminated soil at Bethpage Community Park, a former Grumman waste dump. But a judge found that the town had conducted the cleanup in excess of state standards, and the defense contractor paid nothing for that portion of the cleanup.

A few years later, Bethpage Water District sued Northrop Grumman over newly identified groundwater contamination stemming from the park, which had forced it to construct about $10 million in treatment upgrades. Northrop Grumman engaged in lengthy negotiations with the district, and when officials finally filed suit, the company got the case dismissed by arguing that the statute of limitations to bring a claim had passed.

Cuomo’s announcement is the culmination of a nearly seven-year evolution of the state’s position on the plume. Environmental regulators had once used the polluters’ own plume projections, agreeing with their assertions that full plume containment and cleanup was not feasible. This left Bethpage Water District and other local providers to pay for the treatments to remove contaminants from the drinking water supply.

But in late 2014, the governor signed a bill from then-Assemb. Joseph Saladino (R-Massapequa) that called for environmental conservation officials to study the feasibility of a full hydraulic plume containment. Cuomo appointed Seggos environmental conservation commissioner in 2015, and the state launched its own scientific modeling of plume growth. The state’s $585 million plan was adopted one year ago this week.

In statements responding to the proposal, Northrop Grumman and the Navy initially cast doubt on the science, the cost and the community’s acceptance of the work that it would entail.

By late last month, however, the Navy was revealing its new commitment to capture the plume from spreading further.

"We have recognized that we can do more," the agency’s project manager, Brain Murray, told a citizen advisory board.

All agencies finally 'on the same page' in Grumman plume cleanupWater districts, environmentalists, elected officials and residents hailed the agreements as a significant — but long overdue — victory for the communities that have battled pollution for decades.

80-unit apartment complex in Lynbrook replaces 'blighted' Capri Motor Inn
1:26
The school year began with hope. Then omicron hit. And (un)masking.
Winter storm watch in effect for LI, cloudy day ahead
Snowstorm could (possibly) be a bomb cyclone, forecasters say
Seniors Calendar: Events from Jan. 30 to Feb. 6
0:59
Islip councilman collecting biographies of town veterans for journal
Didn’t find what you were looking for?