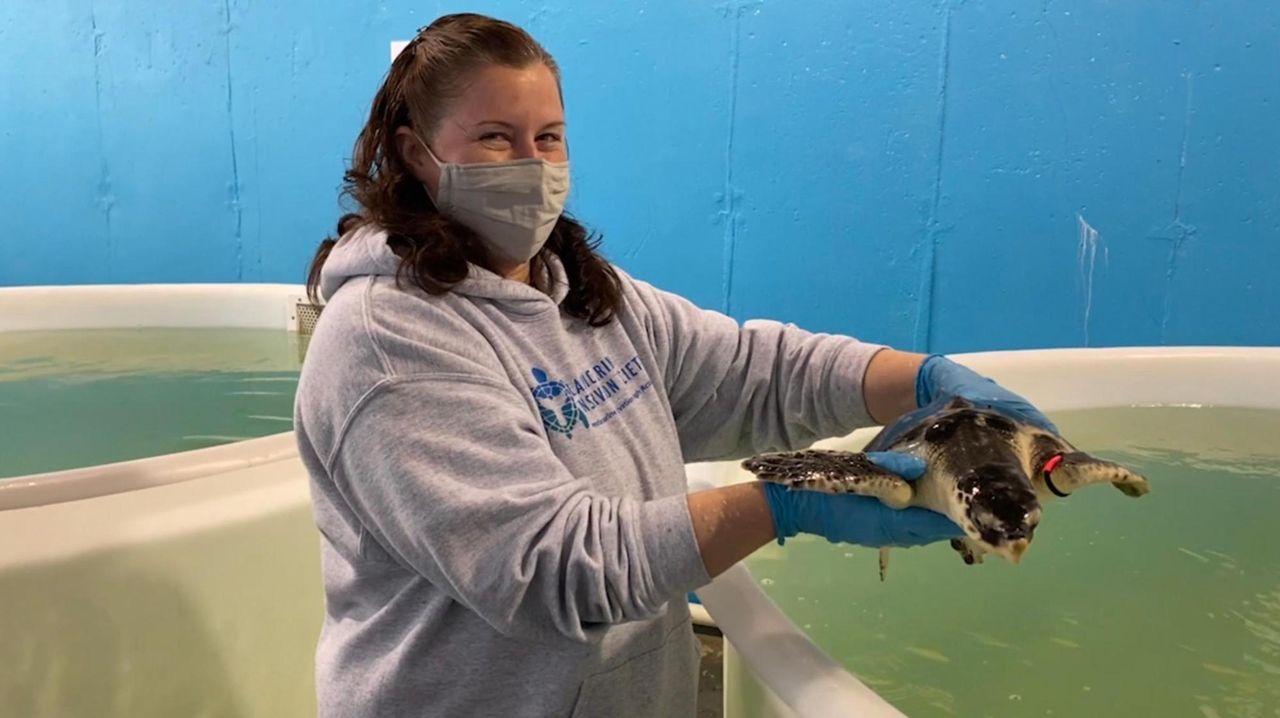 On Friday, the Hampton Bays-based Atlantic Marine Conservation Society transported 11 rehabilitated Kemp’s ridley sea turtles, which are an endangered species, from their critical care facility in Westhampton Beach. The turtles are on their way to Cape Canaveral National Seashore in Florida for release. Credit: John Roca

Critically endangered sea turtles, including 20 brought back from the brink of death by two Long Island rescue centers, were flown to Florida on Friday, where they will be released into the warmer waters off the Cape Canaveral National Seashore, rescue groups said.

There were a total of 37 turtles, all recovered from being cold-stunned, on the fight from the Northeast. All but one of the rare flippered creatures are Kemp's ridleys, and for the trip, they were individually packed in cardboard boxes that have holes in them and were formerly used for shipping bananas.

The turtles were caught too far north when winter arrived. Unable to function as their bodies shut down, they floated helplessly, borne by the winds and waves, until found late last year washed up on beaches, mainly on Cape Cod. This is the same problem that recently stranded thousands of turtles on San Padre Island in Texas during its brutal cold snap.

Friday's flight on "Turtles Fly Too," a Boise, Idaho-based nonprofit, began in Massachusetts, where it picked up 10 turtles from the New England Aquarium in Boston and seven from the National Marine Life Center in the town of Bourne. Then it landed at Francis S. Gabreski Airport in Westhampton Beach, where it took on 11 turtles that were rehabilitated at the nearby Atlantic Marine Conservation Society and nine that were cared for by the New York Marine Rescue Center in Riverhead.

The turtles are often dehydrated and suffering from pneumonia when they are found. These youngsters, perhaps 4 to 5 years old and around a foot or so in diameter, have gained a little weight, reaching just under 5 pounds or so, DiGiovanni estimated.

Adam Kennedy, senior biologist at the New England Aquarium, said in a statement: "These turtles thrived during the rehabilitation process, their bodies responding quickly to antibiotics, warmer water, and a healthy diet." He continued: "We are thrilled to have them back in the wild so soon."

The sea turtles underwent health checks, including blood tests and physical exams, before they were cleared for release, said Maxine Montello, rescue program director at the New York Marine Rescue Center. "And they're feisty; we love a good, feisty turtle," Montello said, adding her group is the only one that takes in sea turtles that wash up in this area.

This has been a terrible cold-stun season: The nonprofit New England Aquarium last month said it had taken in 754 sea turtles. That's the most since 1,000 stranded in 2014, 692 of which were alive, the aquarium says. After Friday's flight, it will still be caring for around 40 sea turtles, having shipped more than 700 to East and Gulf Coast rehab centers, including Long Island's two sites.

Noting the New York Marine Rescue Center has tagged its turtles, Montello said that possibly in two decades or so, when one of the females reaches adulthood and lays her eggs, someone might discover her adventure. "If they scan the flipper, they'll get a number that will tell them where that turtle came from."

She added: "It's such a big effort, making sure these turtles return to the ocean, and it's just a great success for all parties."