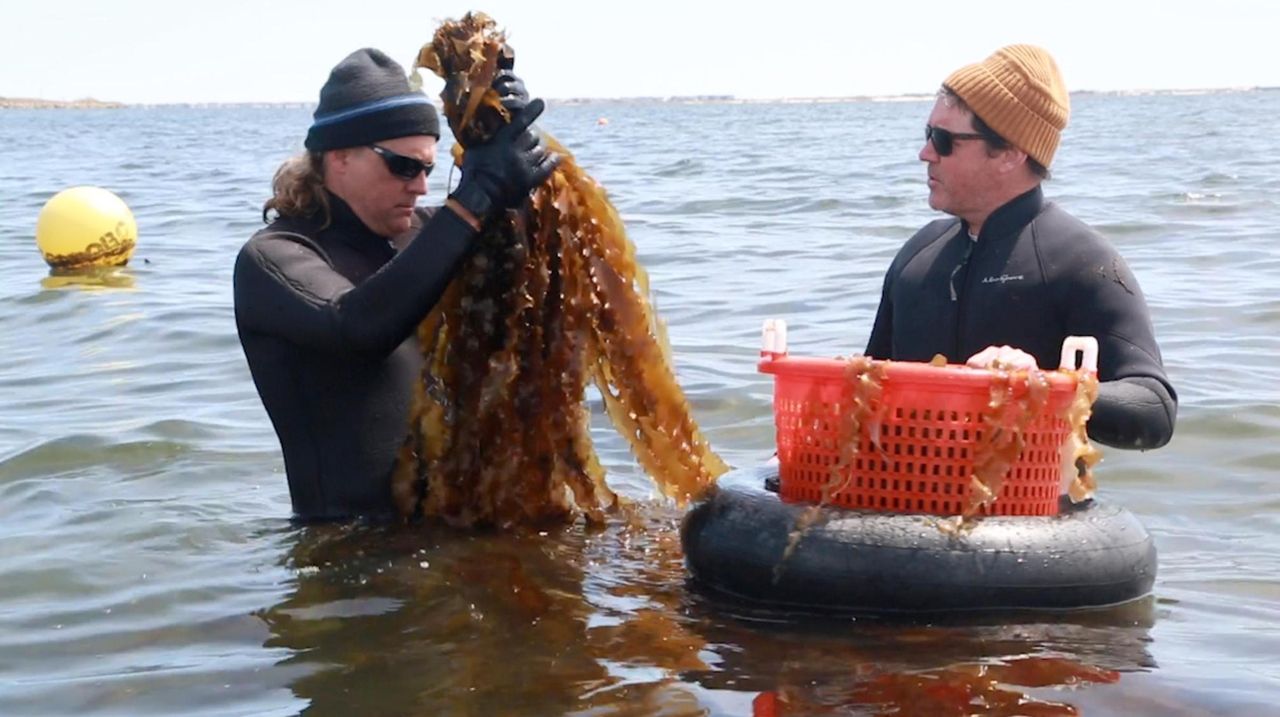 Bobbing on a boat above the Great Gun Shellfish Co. farm in Moriches Bay, owner Paul McCormick tucked a slice of freshly harvested sugar kelp under a just-shucked oyster and slurped in the combo.

Farming seaweed alongside bivalves might be the future of aquaculture on Long Island.

In what they called a promising experiment, Stony Brook University researchers and local farmers grew an impressive crop of sugar kelp during the winter and spring in shallow bay waters, giving hope the emerging specialty crop could become a financial boost to Long Island's burgeoning aquaculture industry while improving water quality.

The 4-foot-long blades of the brownish-green seaweed, ruffled like lasagna noodles and grown on 100-foot strings in Moriches Bay, exceeded previous known growth rates for experiments in the Northeast, according to Stony Brook researchers.

"Conventional wisdom is you grow it in deep water because you don't want it to touch the bottom," said Michael Doall, bivalve restoration and aquaculture specialist at Stony Brook's School of Marine and Atmospheric Sciences. "This has got the potential to usher in a new form of aqualuture. ... It's very, very exciting."

Sugar kelp is used in seaweed salads, sushi and soup, and as a thickener or stabilizer in items such as pudding and ice cream. It also can be dried and powdered for smoothies for its nutrients. For its health benefits and potential among foodies, backers have called sugar kelp "the new kale."

It also can be plucked and eaten fresh from the water. Doall chewed on a piece Thursday at McCormick's farm before he and McCormick harvested a bushel.

"The salt hits you right away, then there's a nuttiness if you chew it. There's a texture — I love the crunch," he said. "You'd think seaweed would be slimy, and not crunchy."

If the successful cultivation can be repeated and expanded in shallow waters, kelp farming would allow oyster farmers to diversify their crops, particularly because the plants grow in the colder months.

"Kelp dovetails perfectly with the oyster season," said McCormick, whose underwater farm covers 3.67 acres in East Moriches and is leased from the Town of Brookhaven. "Growing kelp offers the opportunity to supplement income at a challenging time of year."

While oysters are harvested year-round, activity slows in the wintertime. Also, "If you're just growing one crop, and that kind of crop has a problem, you're that much more vulnerable," he said.

Sugar kelp, planted in November or December, is typically harvested in early June.

While the kelp grown as part of this program is for research purposes and not commercial sale, New England farmers have sold fresh premier baby leaf kelp directly to restaurants for up to $20 a pound, McCormick said. In other instances, distributors buying wholesale would pay $1 a pound.

In four months, the Moriches locations got 400 pounds of kelp on a 100-foot line. In some mockup plans, McCormick and Doall imagine 16 tons of kelp on a one-acre plot.

"There's two parts of the study, one to see if we can grow the kelp and techniques to grow it in shallow water. Step two is to grow a market for it. It's only a viable crop if you can sell it," Doall said, adding he was in discussions with chefs and dealing with a seafood processor.

Cultivating the native seaweed also has environmental benefits. The crop sequesters nitrogen and phosphorous, and also captures carbon dioxide. Higher levels of carbon dioxide can lead to the acidification of waters, which can harm shellfish production, Gobler said.

"We think the aquaculture of seaweeds represents another important tool for improving water quality on Long Island,” he said. About 3 percent of the kelp is nitrogen.

The pilot study, paid for with a $100,000 two-year grant from the nonprofit New York Farm Viability Institute, put commercial-style kelp seed lines in three places this year. Along with Moriches Bay, which can get as shallow as one foot deep, there was a site in the Great South Bay on Town of Islip-leased land, and another in the Long Island Sound outside Mount Sinai Harbor, which was more than 20 feet deep.

At the Long Island Sound site, a more typical location for kelp farming, the growth has been slower — about two feet long — but has taken off in the last two to three weeks. At the Great South Bay, the kelp started to grow, and then disappeared.

Doall said he hopes to expand the sites next year, including on land leased under Suffolk County's aquaculture program, where he couldn't get an agreement this year.

Sarah Lansdale, Suffolk County's director of planning, said “we’re hopeful that in partnership with New York State DEC that this important pilot can get under way.”

The state Department of Environmental Conservation in a statement said commercial kelp farming isn’t permitted yet in New York, but is allowed on a pilot basis.

A sugar kelp study done from December 2016 into 2017 in the Peconic Estuary was less successful. Christopher Pickerell, marine program director for Cornell Cooperative Extension of Suffolk County, said based on the advice and experience of others, they avoided working in shallow waters, or where the kelp would touch the bottom.

"If this most recent work is repeatable, it really would really be a game changer," Pickerell said in an email.