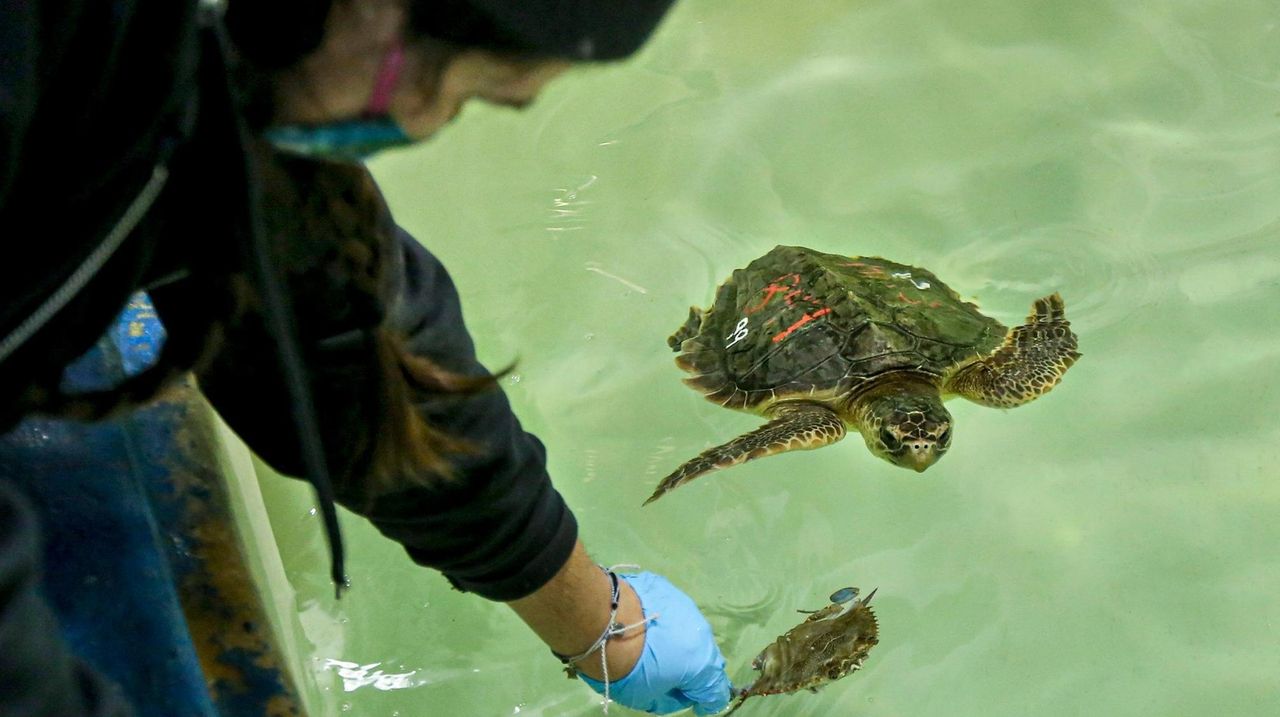 The hundreds of cold-stunned sea turtles that washed ashore this season from Massachusetts to Long Island and were rescued would appear to be the lucky ones.

Many of the endangered green, Kemp’s ridley and loggerhead sea turtles are so weak after floating helplessly for weeks in water far too cold for them to function that about half may not make it, said Maxine Montello, rescue program director at Riverhead’s New York Marine Rescue Center.

A leading killer is aspirant pneumonia, likely caused by inhaling seawater. That is what appears to have killed four of the 20 turtles taken in by the Hampton Bays-based Atlantic Marine Conservation Society, said chief scientist Rob DiGiovanni.

Getting washed ashore, especially during a storm, is "a very traumatic event," he said, for creatures already suffering from hypothermia. And many have other ailments, from embedded hooks and lines to gashes from propeller and boat strikes to fungal diseases. "If there is no intervention, they will end up dead," DiGiovanni said. How long they have been cold-stunned or sitting on the beach is usually impossible to determine.

Blame climate change for the Gulf of Maine's soaring temperatures, which lure youngsters into staying up north long after they should have migrated south, where waters are in the 70s to 80s instead of the 40s and 50s.

The National Oceanic and Atmospheric Administration says "The Gulf of Maine has warmed faster than 99 percent of the global ocean." As arctic ice melts, the Labrador Current that flows south no longer blocks the Gulf Stream from nosing north into that body of water.

This year, the nonprofit New England Aquarium has taken in 754 sea turtles, Kennedy said. That is the most since 1,000 stranded in 2014, 692 of which were alive, the aquarium says. It now is caring for about 50, having shipped more than 700 to East and Gulf Coast rehab centers.

Two loggerheads, which tend to be older, from say 8 years old and up versus the 1- to 2-year-old range seen with the green and Kemp’s ridley turtles, were flown from the Boston aquarium to the New York Marine Rescue Center on Saturday, courtesy of Turtles Fly Too, a Boise, Idaho-based nonprofit.

At rehab centers, sea turtles are gradually warmed in a series of rooms, and may receive subcutaneous fluids, antibiotics and other first aid.

Each rescue can cost as much as $10,000, depending partly on the care needed — some require scans and surgeries — and last seven or eight months. Staff, maintenance, food and keeping tank water clean also run up bills.

Stress, as with any wild animal, can prove lethal. Three rescuers may be needed to insert a feeding tube for critical turtles containing a slurry of shrimp, squid, supplements and other delights. Lethargy is another enemy. "You hope the animal fights and doesn’t like it," said DiGiovanni.

Anyone who has played airplane to feed a toddler may already know how to entice an emaciated sea turtle to eat.

Squid and herring are chopped into "weird shapes" to pique their interest and may be waved in front of them with tongs, said Kennedy. "And sometimes it’s a matter of getting them angry enough to bite at it. A lot of these guys don’t realize what we’re doing, you can’t just put something in front of their faces."

This summer, the rescue center plans to release its survivors into Long Island waters. "The important thing is these are all actually sexually immature juveniles," said Montello, as most will not breed before reaching age 20 or so. Yet, she said: "they still have a long journey ahead of them before they start procreating."