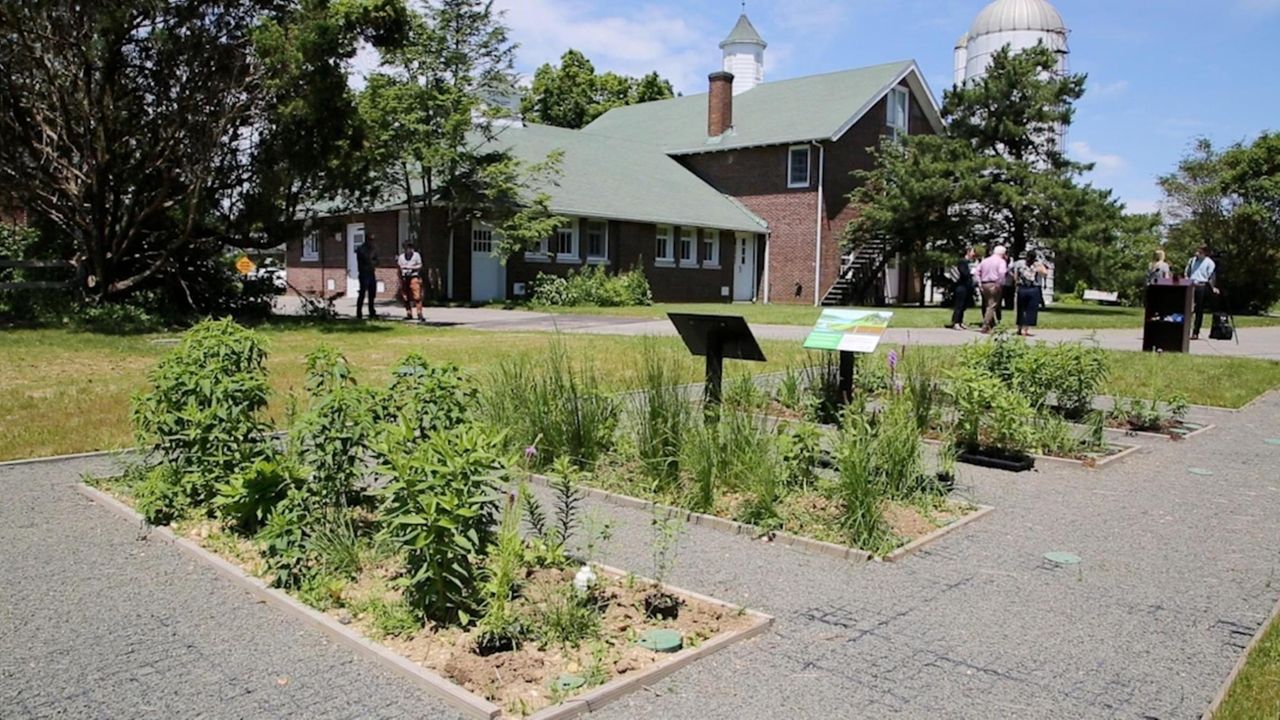 The Uplands Farm Sanctuary on Monday celebrated the installation of a nitrogen-reducing wastewater-wetland, only the second system of its kind in Suffolk County. The wetland relies on native plants and the soil’s natural microbial processes to remove nitrogen pollution and other contaminants from wastewater.  Credit: Barry Sloan

Suffolk County Executive Steve Bellone — along with county legislators, scientists and representatives from the Nature Conservancy of Long Island — celebrated the completion of a man-made wetland Monday designed to treat wastewater and reduce nitrogen levels.

“What we drink is underneath us, in the aquifers below,” said the county’s water quality head Peter Scully. “It’s become increasingly clear that lack of sewage [treatment] in Suffolk County is having significant negative impact on our water resources. We decided to use a constructed wetland system to reduce our nitrogen.”

That way, “people can install [this wetland system] in front of an office building, at their homes or at the park,” Clapp said.

The wetland is open to the public for visitors to learn about the system, and Clapp said he hopes the work coming out of the upcoming research will help homeowners install similar systems affordably and effectively.

Nearly 75 percent of Suffolk homes have no connection to a sewage system. This means all that nitrogen-rich waste from those homes is either stored into cesspools or antiquated septic systems.

Under its Reclaim Our Water program, the county is urging homeowners and businesses to switch to new, updated septic systems to reduce nitrogen pollution, and 300 to 500 of them have been installed, according to Scully. Just over 110 systems have been  installed by homeowners who received grants to help pay for the work,  he said.

The county is hoping the wetlands system will be a solution that homeowners will consider besides a traditional wastewater disposal system.

“We’re looking into ways of reducing nitrogen in an environmentally friendly way,” said Legis. William Spencer (D-Centerport), who pushed for constructing the sanctuary’s wetland back in 2015. “Not take and build large infrastructure but just take advantage of our natural geography to use it.”

The cost of the sanctuary’s wetland project was $145,000, along with $40,000 in education and outreach, according to Clapp. The source of funding was split into roughly three equal amounts between the Long Island Sound Study, the county and the Nature Conservancy.

The goal for this wetlands project? To reduce nitrogen levels as much as possible as well.

“They have installed effectively the gold standard here for clean water technology,” Bellone said of this project. It will “make sure Long Island is achieving its full potential and that we are protecting this precious resource: our water quality.”

Corrections: A previous version of this story misquoted Peter Scully, Suffolk County's water quality chief, and misstated that just over 100 grants had been awarded to homeowners to help pay for updated septic systems.