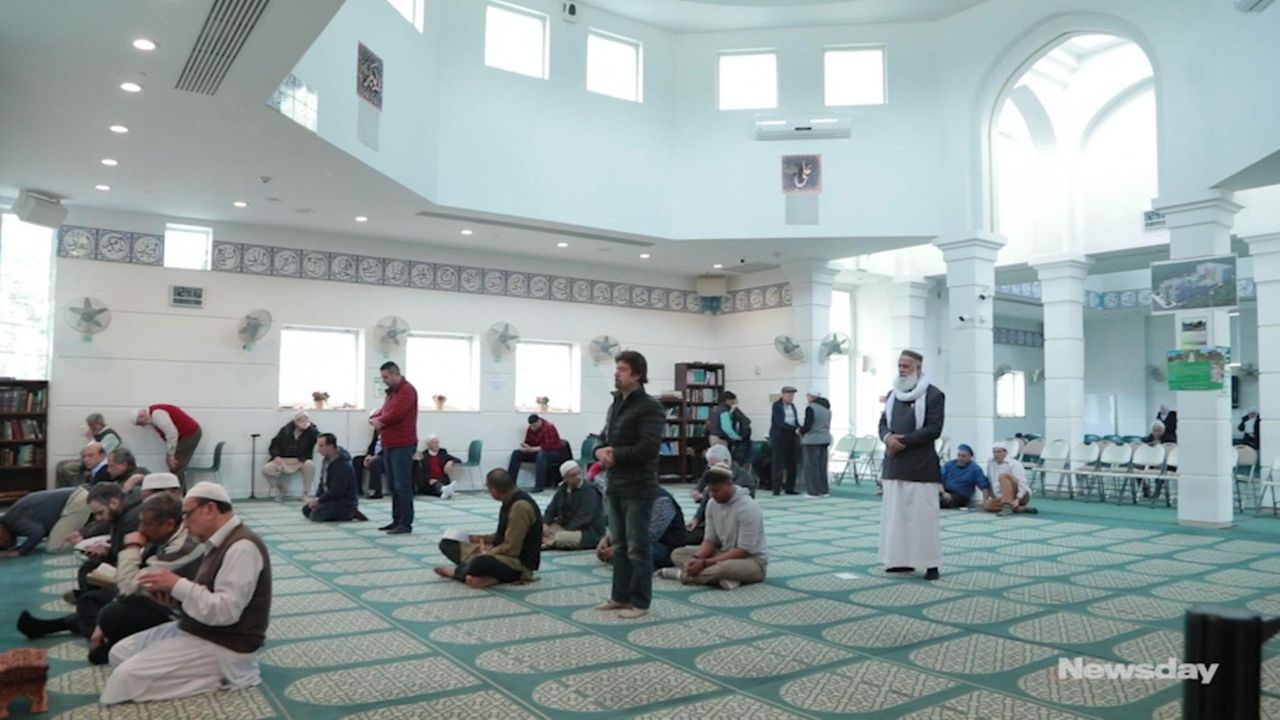 Long Islanders of different faiths united on Friday at the Islamic Center of Long Island in Westbury to offer their condolences and counter the hatred and white supremacist beliefs expressed by the mass shooter who slaughtered Muslims at prayer in New Zealand last week.  Credit: Newsday / Yeong-Ung Yang

Grieved and alarmed by last week’s slaughter of Muslims at prayer in New Zealand, Long Islanders of different faiths united on Friday to offer their condolences and counter the hatred and white supremacist beliefs expressed by the mass shooter.

Worshippers entering the courtyard of Westbury’s Islamic Center of Long Island were greeted by Jews and Christians, who stood in two lines, some holding signs, saying “We stand together” and “Your fear is our fear, your pain is our pain.”

Saying she was there both as a mother and as a prosecutor of hate crimes, Nassau County District Attorney Madeline Singas said: “We’re here to create a pathway so that people can pray in peace.”

Mufti Mohammad Farhan, the center’s executive director, urged Muslims who live in the West not to isolate themselves.

“Sometimes only the most difficult situations bring us together,” he said, adding later: “We have to also make sure that the society we are living in — we also become a part of that.”

Long Island’s interfaith embrace, attended by several hundred supporters and worshippers, echoed similar prayers and services held around the nation since 50 Muslims were killed a week ago at two mosques in Christchurch.

One gunman was charged with murder. On Thursday, New Zealand banned sales of the “military-style” semiautomatic firearms and high-capacity magazines the gunman used. On Friday, New Zealanders observed the Muslim call to prayer before funerals for those who were gunned down resumed.

Wearing a black New Zealand-style baseball cap bought on a recent trip to the South Pacific country, Leonard Kaufman of Merrick said he came to the Islamic Center Friday “in support of my fellow brothers.”

“It’s a heartfelt thing; it’s to show our support and our sadness,” said Jane Scal, 74, of Williston Park.

Her husband, Don, 88, noted Muslims from the center came to their house of worship, Temple Sinai of Roslyn, after Jews were slain last year in Pittsburgh.

“We’ve all felt the same pain,” he said.

That is the same point touched on by Nassau County Executive Laura Curran, who wore a green scarf — said to be the prophet Muhammad’s favorite color.

“I am here with a simple message: We are one,” Curran said. “When one part of the body is hurt, the whole body feels hurt.”

She added: “Our county is here for you.”

Cuomo: Outdoor graduations of more than 500 people OK with restrictions
1:54
'Let's vaccinate them at the schools': NY's vaccine push focusing on students
2:27
Precinct supervisor: 'We thought we had lost' injured cop after suspect stabbed him
2:49
Projected fatal drug overdoses increased on LI during the pandemic, statistics show
Regents push emphasis on diversity in curricula, hiring
State figures: NY nursing home staff lagging in COVID-19 vaccinations
Didn’t find what you were looking for?