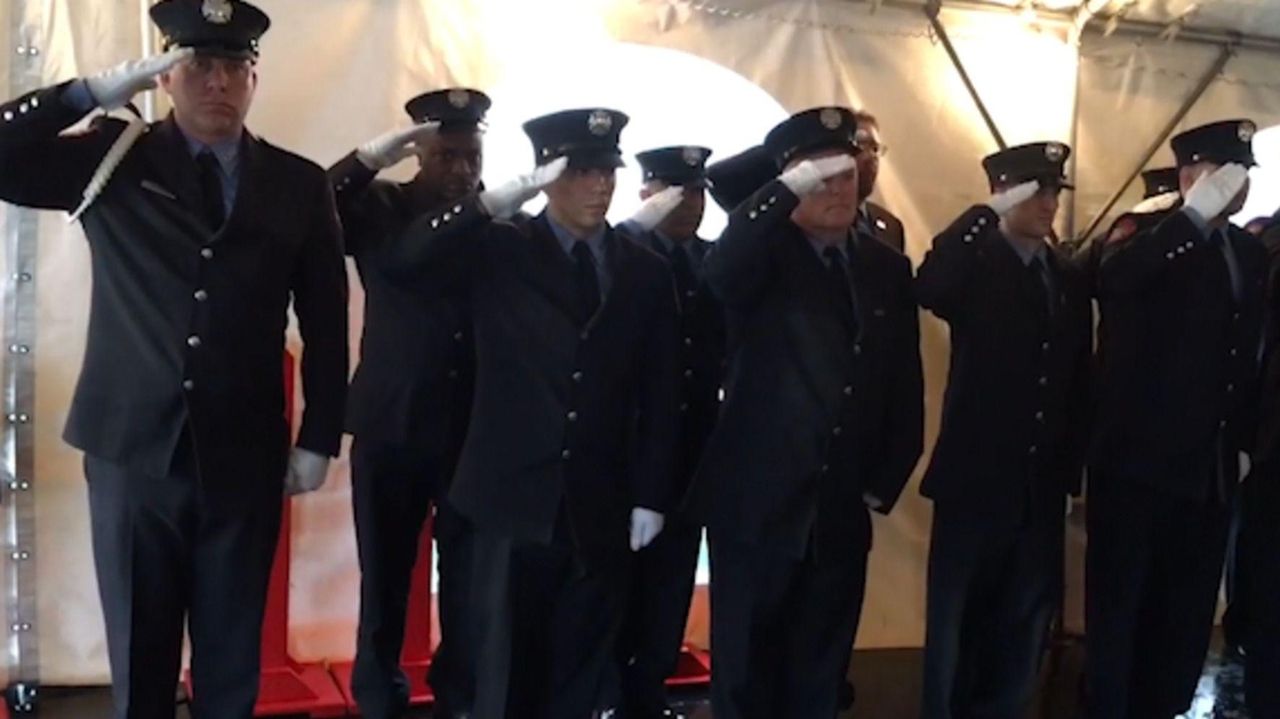 On Tuesday, April 25, 2017, hundreds gathered to mourn William Tolley, 42, the FDNY firefighter from Bethpage who died on April 20, 2017, after he fell five stories from the roof at a Ridgewood apartment building, where a minor blaze was caused by burning incense left unattended, FDNY officials said. His death remains under investigation, but authorities believe the 14-year FDNY veteran fell after being jolted from a raised fire truck bucket before he could put on a safety harness. The wake continues Wednesday, April 26, 2017, from 2 to 4 p.m. and 7 to 9 p.m. at the Fredrick J. Chapey & Sons Funeral Home on Hicksville Road. A funeral Mass will be celebrated at 11 a.m. Thursday, April 27, 2017, at St. Martin of Tours Church in Bethpage. Credit: Jackie Molloy

In another time, it would have been FDNY firefighter William Tolley saluting a lost colleague. Last night in Bethpage, his FDNY brethren did it for him, just five days after he lost his life fighting a fire in Queens.

“We have, even in this terrible weather, a tremendous outpouring for our lost member Billy Tolley,” FDNY Commissioner Daniel A. Nigro said inside a funeral home for the 14-year veteran firefighter’s wake.

“Billy meant a lot to this house and this department. . . . He was part of our ceremonial unit. He’d be standing out here in the rain. Unfortunately we are here for him today.”

Outside, a steady downpour dampened hundreds of mourners as they rushed to line up in a tent to get into the Fredrick J. Chapey & Sons Funeral Home on Hicksville Road.

Tolley, 42, of Bethpage, fell five stories from the roof of a Ridgewood apartment building to his death Thursday while fighting a minor fire sparked, FDNY officials said, by burning incense left unattended. His death remains under investigation, but authorities believe Tolley fell after being jolted from a raised fire truck bucket before he could put on a safety harness.

Inside the funeral home, Tolley’s wife, Marie, shook mourners’ hands as his daughter, Isabella, 8, sat on a stool, next to a chair with a teddy bear and balloon.

In the room where Tolley’s body lay in a coffin, photographs of moments from his life flashed before the mourners.

Several pictures highlighted his love for his daughter, affectionately known as Bella. In one image, father and daughter hold a sign that says “First day of pre-K.” Others showed Tolley on vacation, barbecuing or playing drums in his heavy metal band, Internal Bleeding, which he co-founded more than 20 years ago.

“We are finding out he meant a lot to more than just his family,” Nigro said last night.

He said Tolley had volunteered for the Make A Wish Foundation and Wounded Warriors.

For a few hours yesterday, Bethpage was like an FDNY outpost. Firefighters hugged. They cried. They shook hands and laughed, too, because they were in a profession where sometimes it takes a death for the living to reunite.

But it was also a place where Tolley’s friends celebrated the musician side of him, one that was almost as strong as his firefighter passion, those who knew him said.

Yonkers musicians Kelly Izquierdo and Ron Kachnic had known him for years because they played and hung out in the same circles. They remembered the way he drummed, the way he did “his own thing” musically — immune to trends — and how he adored his daughter.

Said Izquierdo, “He died too young.”

A funeral Mass will be celebrated at 11 a.m. tomorrow at St. Martin of Tours Church in Bethpage.