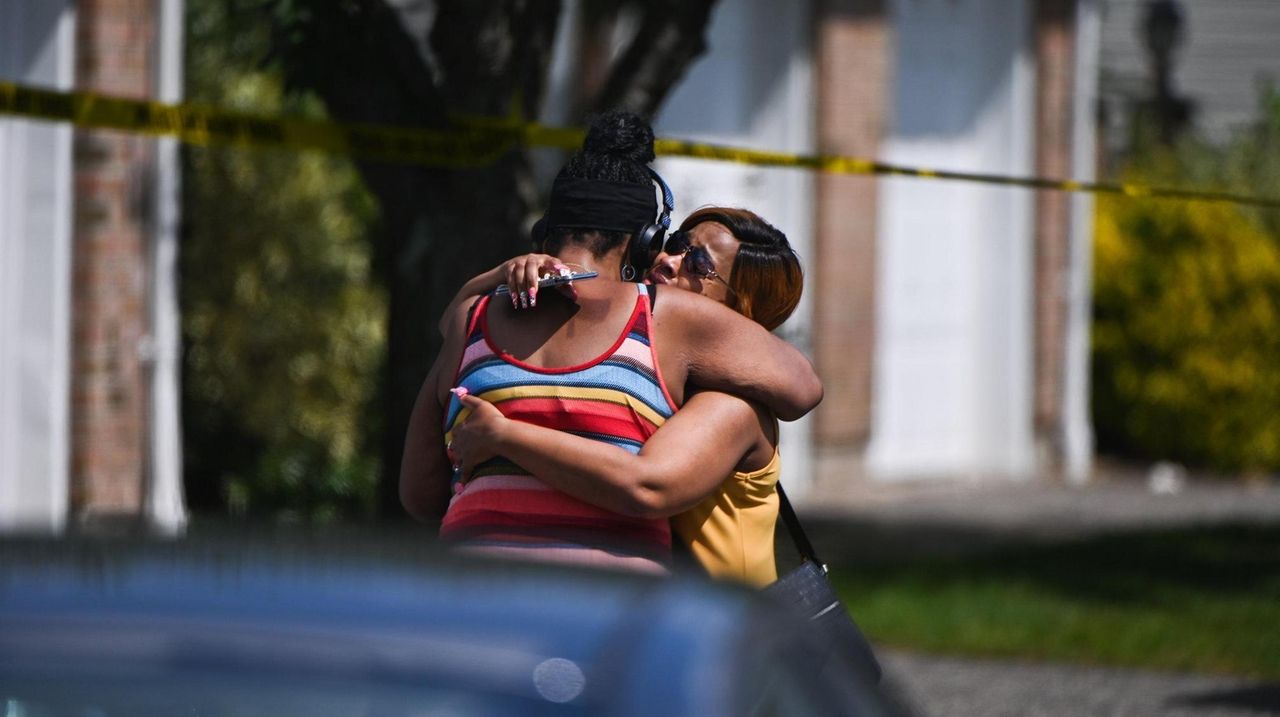 A man and two women were found shot dead inside a Farmingville town house Friday afternoon, and authorities were searching for a killer or killers who apparently had kicked in a door to force their way in, Suffolk County police said.

A baby also found inside the home, on Overlook Drive, was unharmed, police said.

Suffolk County homicide Det. Lt. Kevin Beyrer, in a briefing near the crime scene, said police would not know if the attack was random or targeted until they investigated the victims' background.

Beyrer said police responded about noon after a 911 call.

"The call came from a relative of one of the residents inside the home. He had come to check on them and suspected they were dead inside the house," Beyrer said. "They were shot and there were signs of forced entry."

Beyrer said it appeared that someone had kicked in the door and broken the doorjamb. He said police had not determined if the shootings happened Thursday night or Friday morning.

Police said they had found the baby, less than a year old, in a room with the door closed. The baby was taken to a hospital for observation.

Friends at the scene remembered the victims and pleaded for help in finding the killer.

Jazzy Holland of Coram said she was a godmother of victim Diamond Schick.

"This is heartbreaking. I don’t want to see another family go through this again," Holland said. "If anyone knows anything, please say something. We have three people who are murdered."

Anayah Nesbitt, 25, of West Hempstead, said Schick, her best friend, was about to marry Castano. She said Schick ran a day care with her mother and had sent her photos of her wedding dress.

"She was like my sister. She was very smart and cared about everybody and not into negative things," Nesbitt said. "The fact that something negative intervened with what she had going on, now I can’t grow with her as her sister and best friend."

The town house is in Fairfield Hills South, a rental complex owned by Fairfield Properties where homes are rented starting at $3,000 per month.

The complex has a gated front entrance, but neighbors said the gates are rarely locked at night, with cars coming and going.

At the complex Friday, family members sobbed and embraced on the lawn. Some relatives fell to the ground in tears. A police drone flew over the crime scene as detectives collected evidence.

A family friend, Jacqueline Wiggins of Medford, said her son had called her and told her that a couple and another woman in the home were dead.

She said that both of the female victims were mothers.

"There’s a lot of heartbreak here. Everyone’s hurting. They were just trying to live their lives, so they didn’t deserve this. I don’t know why this happened," Wiggins said.

"I don’t know if they were targeted, but if you kick someone’s door down and kill females, you’re a coward. Something needs to be done and they need to be caught," she said.

Officers cordoned off the complex with yellow tape while a police mobile command unit was parked next to the town house. Police also were investigating two vehicles outside. Police said they had previously been called to the home for noise complaints.

Grant Yoches, 17, said he was riding his bike outside the town houses when police came rushing by.

"I heard screaming … and saw police tape and I got really scared," Yoches said.

"There have been issues with this complex I’ve seen," Yoches said. "It hasn’t felt super safe."