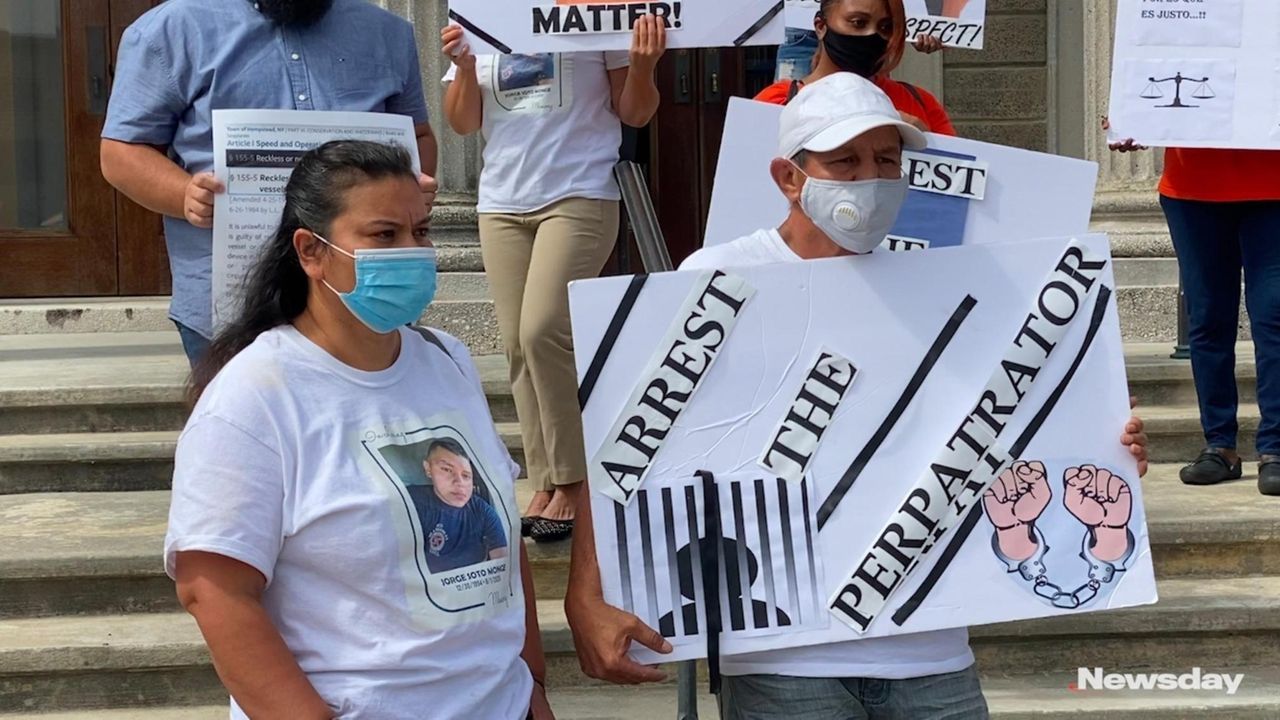 At a new conference Thursday, Assemb. Phil Ramos (D-Brentwood) called for the Nassau County Police Department to be more transparent in the case of Jorge Soto, who was killed in a boat crash when two boats collided in Freeport Creek on Aug.1.  Credit: Howard Schnapp

Assemb. Phil Ramos (D-Brentwood) said Nassau police did not fully investigate the fatal crash because the man who was killed, Jorge Soto of Freeport, is an emigrant from El Salvador, and because the operator of the boat that caused the fatal crash is white and may be connected to people influential in local politics or law-enforcement officials.

“We have the list of names, we are handing it over to the police department,” Ramos said Wednesday during a news conference outside the Nassau County Legislature Building in Mineola. “We want an explanation.”

Ramos, a former Suffolk police officer, acknowledged that he does not have any evidence that the operator of the second boat had links to the police, politicians or other Nassau County power brokers.

A Nassau police spokesman said investigators have not found evidence of criminality and that the investigation into Soto’s death is continuing.

Nassau Police Commissioner Patrick Ryder declined to be interviewed for this story, but in an Aug. 14 interview with Newsday he pushed back on allegations that investigators had not aggressively pursued the case because the of the victim’s race. “That is not true and it is not fair,” Ryder said.

In an Aug. 18 letter to Ramos, Ryder denied the operator of the second boat had links to police or politicians.

“The lead investigator on this case is a 51-year employee of the police department and his reputation is renowned in the law-enforcement community as one of the most professional investigators in the country with regard to accident reconstruction,” Ryder said in the letter to Ramos.

Soto, 25, was a passenger on a boat that was hit so hard by another vessel in Freeport Creek that it split in two. Ryder said in his letter to Ramos that the operator of the second boat was not arrested because the area where the fatal crash occurred was not subject to a 5-mph speed limit.

Town of Hempstead law forbids the reckless or negligent operation of vehicles, Ramos said at the news conference, and the fact that the second boat caused so much damage is prima-facie evidence of recklessness.

Ramos and Nassau Legis. Carrié Solages called on county lawmakers to hold a hearing on the investigation.

Solages said police revealed Soto's immigration status when they released his name to the press. He said he would ask the Nassau Legislature and County Executive Laura Curran to develop a policy that would bar police from identifying the immigration status of crime victims.

“How can we encourage them (immigrants) to say something if their names are going to be disclosed to the media and the whole world so that they could be subject to retribution for speaking up?” Solages asked. “It is time to speak up for our victims.”

Ramos and Solages were joined at the news conference by Soto’s parents, who said Nassau police tried to intimidate them for calling for criminal charges against the operator of the second boat.

“They are hiding the perpetrator that killed my son,” an emotional Jose Soto Monge said in Spanish.