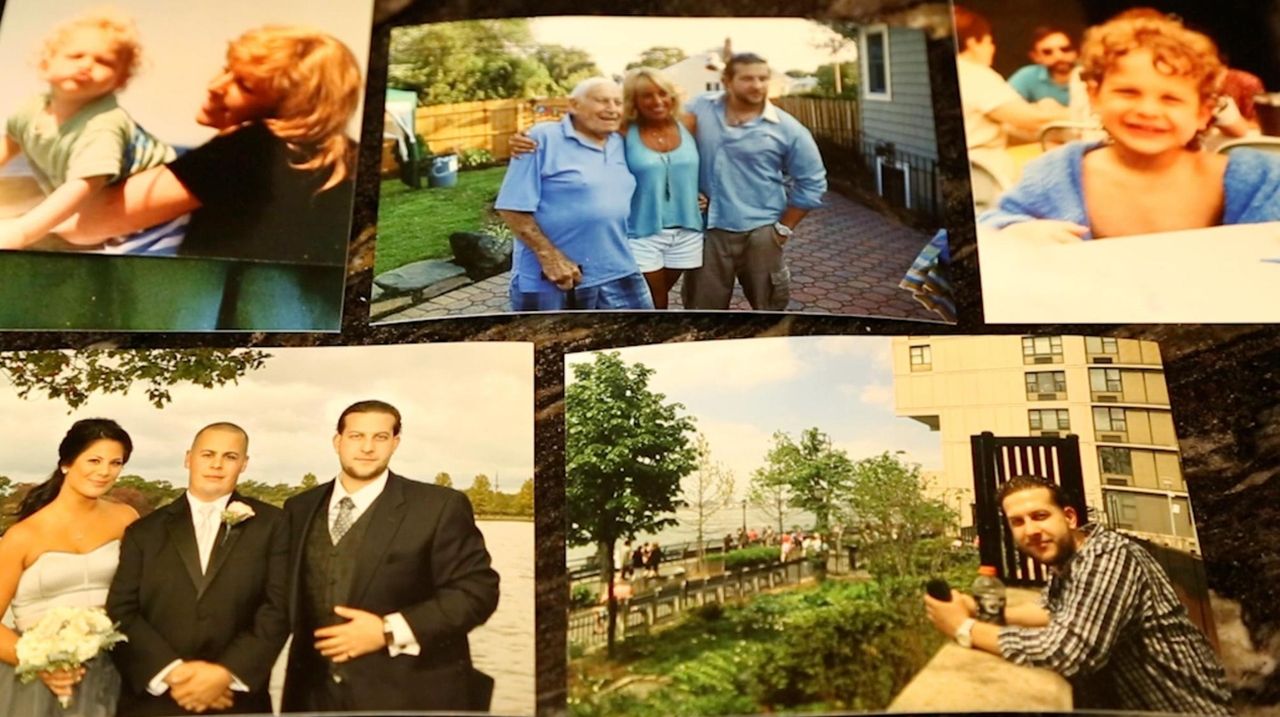 Sharon Richmond lost her son Emanuel Vincent D’Antoni in 2017, after he struggled for years with addiction, to a fentanyl overdose. Richmond is encouraged about the decline in fatal opioid overdoses on Long Island, but knows there is still plenty of work to be done. Credit: Barry Sloan

For the first time in years, fatal opioid overdoses in Nassau and Suffolk counties decreased in 2018 after alarming spikes at the height of an epidemic that has claimed almost 3,700 lives on Long Island since 2010.

Fatal overdoses fell to 483 in 2018, from a high of 614 in 2017, according to data provided by the police departments and medical examiners in Nassau and Suffolk counties. The figures are estimates because in some cases toxicology reports can take years to complete.

In the past nine years, roughly 3,685 people fatally overdosed on opioids on Long Island.

Even as the Islandwide fatal overdoses decreased by 21 percent from 2017 to 2018, hundreds of tragedies remain.

“It’s hard to jump for joy when, between the two counties, you still have 400-some-odd people dying,” said Jeffrey Reynolds, president of the Family and Children’s Association, a Mineola-based nonprofit that provides counseling and outpatient drug rehabilitation treatment. “A 20 or 25 percent drop is of little consolation if you’re standing at your kid’s funeral."

However, the decline signals to officials that their aggressive efforts in prevention, education, enforcement and treatment, such as Nassau’s Operation Natalie and Suffolk’s Preventing Incarceration Via Opportunities for Treatment, may finally have made some inroads. Authorities also attribute part of the decrease to the widespread use of drug antidote naloxone, which has been administered thousands of times on Long Island in recent years by first responders and residents.

“It’s an affirmation of the work that we’ve been doing to combat the opioid epidemic,” Suffolk County Executive Steve Bellone said.

For Sharon Richmond, 54, of Northport, the statistics don’t change her family’s reality. Her son, Emanuel Vincent D’Antoni, died of a fentanyl overdose in 2017 at 25 years old. The case remains unsolved.

"Most people think the first year is the hardest," she said. "But the first year, you're in total shock. You're just getting up and getting through the day and you're in disbelief. I actually think this year, the second year, is harder because the realization of him being gone is every day. You hear somebody talk about their kids, you wake up and hear the phone ring and I'm expecting a call. I go to a wedding and I know I'll never be going to his. Somebody has a grandchild, I know I'll never have one from him. So those realizations, you don't think about the first year, you're just trying to survive. The second year, you realize the truth of it."

Still, Richmond is encouraged by the downward trends, though she said more work must be done.

“You see fewer new users than you ever have before,” Reynolds said. “We’re seeing kind of the cumulative effort of a lot of years and a lot of dollars.”

Nassau County Executive Laura Curran said authorities "have to be just as persistent and relentless as the addiction itself.”

From overdose to arrest

Both county police departments have assigned detectives to follow up on fatal and nonfatal cases in the hopes of following the drugs back to the dealer.

In Suffolk County, a field information officer from the local precinct will rush to the scene of an overdose, often going to the hospital to talk to family and friends.

The immediacy is “huge,” said Det. Lt. William Burke, commanding officer of the Criminal Intelligence Section, because the loved ones of an overdose victim are often more likely to talk to police as the addict is “being taken away on a stretcher.”

The department also has a partnership with the Long Island Council on Alcoholism and Drug Dependence to refer users to treatment through the Preventing Incarceration Via Opportunities for Treatment, or PIVOT, program. From November 2017 to mid-January, 60 of the 514 people referred have received counseling or treatment through the initiative.

In Nassau, two detectives will visit addicts after they have been released from the hospital for aftercare visits. In some cases, the detectives will drive the addict directly to treatment. The department plans to join with the Health Department this year to bring a substance abuse expert to these visits as well.

“They try to convince them to get help,” said Insp. Chris Ferro, commanding officer of the Major Case Bureau. “The next overdose could be their last.”

Fatal overdoses can result in weekslong investigations as authorities seek to get the deadly heroin or fentanyl —  a potent synthetic opioid —  off the streets before anyone else dies. They try to target higher-level dealers and suppliers quickly.

“You can’t have a six-month investigation on a guy whose drugs are killing people,” Suffolk Chief of Detectives Gerard Gigante said.

It’s difficult to build manslaughter cases because prosecutors must prove dealers recklessly caused the victim's death, authorities said. Often they have to settle for felony sale charges instead.

It’s often up to detectives such as Ghyslaine McBean, who worked 10 years with Suffolk families after fatal overdoses to try to build cases against dealers, to inform those left behind.

“They just want someone to pay for the loss of their loved one,” she said.

In March, Roxy Headley Jr. of Mastic Beach pleaded guilty to second-degree manslaughter for dealing drugs that led to the lethal dose of heroin and fentanyl to a North Babylon man in 2016.

Headley, the first person charged in New York State with manslaughter for dealing drugs in connection with an overdose death, was sentenced to 11 to 15 years in state prison.

The six-week investigation of Headley — which included 17 search warrants — began after authorities detected a rash of fatal and nonfatal overdoses, Suffolk police said. “He was basically killing somebody and he didn’t really care about that,” said Det. Lt. Timothy Dillon, commanding officer of the Narcotics Section.

In Nassau County, “numerous” overdoses in Massapequa and Farmingdale, as well as along the Suffolk border, led to an investigation by the Long Island Heroin Task Force and a seven-month wiretap through the Nassau district attorney’s office, Ferro said.

In the 2017 bust, 116 mid- to upper-level drug dealers were arrested — they are believed to be linked to eight fatal and nonfatal overdoses. Authorities also seized 21 vehicles, 12 guns and two kilos of heroin.

Between Jan. 1 and Jan. 30, Nassau police arrested four suspects  who are linked to fatal overdoses and three suspected of involvement in nonfatal ones, Ferri said. In 2018, authorities arrested about 50 people linked to overdoses and 75 in 2017.

“We can’t bring back your loved one but we want to give you a sense of justice,” Ferro said.

Where opioids were listed in the cause of death or mixed with other drugs that caused death. Click on bars for details or legend to filter counties.

* Figures are projections for Nassau in 2018 and in Suffolk for 2016-2018 due to unresolved cases. Sources: County police and medical examiners.

Combating an epidemic through community relations

His office usually has fewer than five fatal overdose cases in a weekend — a marked difference from July 2017, when there were 10 to 15 cases in a single weekend.

Authorities have blanketed the Island with community meetings and school programs to achieve that result. While treating the current addicts and training people to use naloxone, their goal is to reach the younger generation and their parents to prevent young people  from ever becoming users.

Nassau’s Operation Natalie has become Ryder’s hallmark initiative. Named for Natalie Ciappa, a Nassau County teen who died of a drug overdose a decade ago, the program combines mapping the location of overdoses and automobile larcenies — crimes drug users often commit. The program follows up with town hall meetings countywide and treatment options.

Police began, in February 2018, meeting with people who live in communities with the worst opioid problems, with a follow-up 60 days later. There have been 24 meetings through Operation Natalie, some of which were met with resistance from residents for the negative attention.

In 2018, Nassau police held 2,000 meetings — including a school safety forum at Hofstra University in September where hundreds attended — that touched on opioids.

This year, the department plans to combine communities into “zones” for Operation Natalie meetings to reach more residents at one time.  Ryder will also introduce the Too Good for Drugs program to kindergarten classes, as well as add five officers solely focused on opioids to the Community Affairs Unit.

In Suffolk County, officials also use mapping systems to track overdoses and overlay them with other crimes, such as larcenies to automobiles and burglaries. They look for clusters that can help detectives find dealers.

“The more you’re aware of things, you’re able to quicker respond to them,” Gigante said, adding that the department is working with police agencies on the East End to add them into the overdose mapping program.

Suffolk police have also made education and awareness a major priority.

In 2018, the department held 255 classes on opioids for seventh- through 12th-graders after school requests, according to Sgt. Kathleen Kenneally, commanding officer of the Community Relations Bureau.

Since 2015, school districts have increasingly asked for programs about prescriptions, heroin and fentanyl. The department provides gateway drug education awareness classes for fifth- and sixth-graders.

“We’re hoping that we are effective with the education,” Kenneally said. “If we can curb children’s propensity to cave in to peer pressure, it’s really a good thing.”

Officials in both departments, however, are concerned about the consequences of youth vaping and the potential legalization of marijuana. They are putting renewed resources into educating students about the dangers of gateway drugs.

'What parent is losing their child today?'

The Suffolk County Heroin and Opiate Epidemic Advisory Panel in December recommended, as part of its 2018 report, researching the needs of children who are born opioid-dependent or living in families where addiction exists, increased education efforts regarding substance abuse among senior citizens, and development of treatment services on the county’s Native American reservations.

Richmond said her son's addiction began with marijuana to help with his anxiety and turned into an opioid addiction for oxycodone, heroin and ultimately fentanyl, she said. D’Antoni was denied long-term inpatient treatment by his insurance company multiple times and overdosed not long after he had been clean for 60 days.

Richmond travels across Long Island and to the state Capitol to fight for other families who are suffering.

“Every morning I wake up and think, 'What parent is losing their child today?' ” she said. “My son used to tell me I was the strongest person he knew. So I want him to be proud and I want him to know that I’m going to make it better for other people just like him.”

Fatal opioid overdoses decreased between 2017 and 2018 across Long Island, according to data provided by the Nassau and Suffolk police departments and medical examiners.

* Denotes estimated figures because some of the cases, sometimes going back years, remain pending.